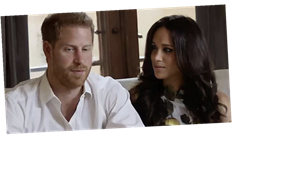 Meghan Markle and Prince Harry have made their first appearance together since breaking the news that they're expecting their second child together and leaving the Royal Family permanently.

The couple, who are already parents to one year old son Archie Mountbatten-Windsor, recorded a video of themselves to speak about their podcast Archewell Audio at a Spotify live stream event on Monday 22 February.

Meghan, 39, and 36 year old Prince Harry released the first episode of their podcast in December last year after making a reported £30million deal with the media streaming giant.

While Prince Harry donned a crisp white shirt with a pair of dark trousers for the occasion, his pregnant wife opted to wear a spring-themed white midi dress with lemons, white flowers and green leaves embroidered on it. The gorgeous number is thought to be a Citrus Peplum Hem Dress from Oscar de la Renta, which is said to cost a whopping £2,645.69.

The former Suits actress styled her main down into curls and wore a full face of make up, complete with eyeshadow, eyeliner and and blush.

During the short clip, which was filmed in their home in Montecito, California, Meghan told viewers she and Harry are using their podcast to "drive powerful conversations". She said: "We created Archewell audio to make sure we can elevate voices that maybe aren't being heard and hear people's stories."

While Harry, who is reportedly self-isolating in case he needs to rush back to England to be with his grandfather Prince Philip in hospital, added: "And the biggest part of this is trying to create this community of where you can share, that will encourage everybody else to then share their own vulnerabilities in that safe space."

Last week, the couple lost their royal patronages as they confirmed they would not be returning as working members of the Royal Family after stepping down as senior members in 2020 with a 12 month review being agreed.

It is stated that Prince Harry himself held a conversation with his 94 year old grandmother Queen Elizabeth II to discuss his and Meghan's future, which will now mainly take place outside of the Royal family.

A statement issued by the Royal family reads: "Following conversations with The Duke, The Queen has written confirming that in stepping away from the work of The Royal Family it is not possible to continue with the responsibilities and duties that come with a life of public service.

"The honorary military appointments and Royal patronages held by The Duke and Duchess will therefore be returned to Her Majesty, before being redistributed among working members of The Royal Family."

The statement continues: "While all are saddened by their decision, The Duke and Duchess remain much loved members of the family."