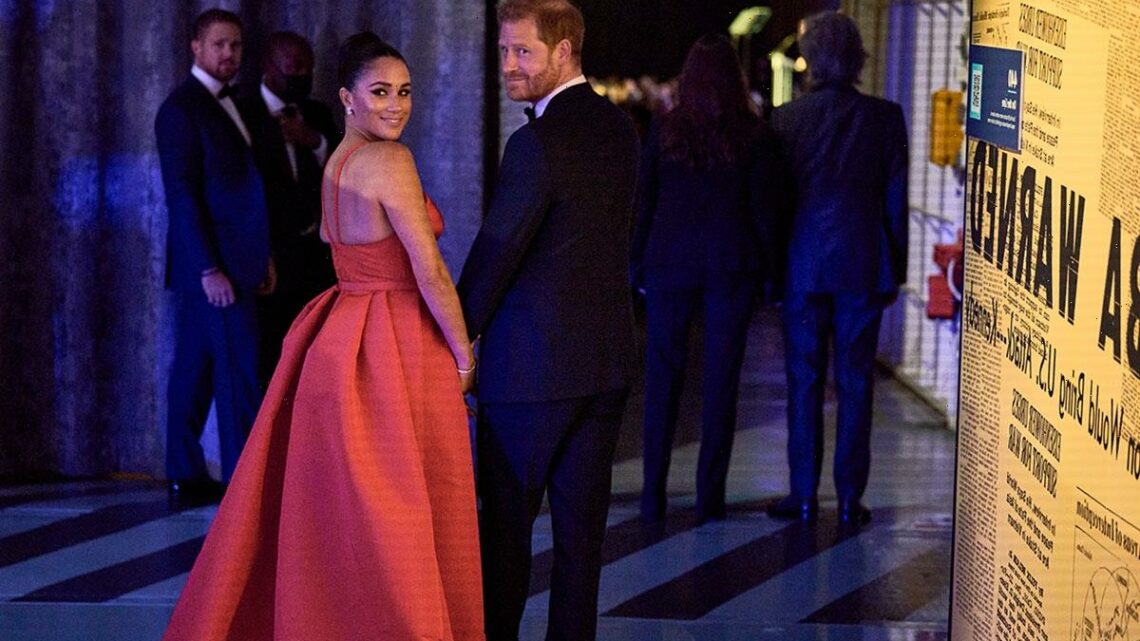 The Duchess of Sussex gushed over her husband Prince Harry as the couple made their first red carpet appearance since stepping back as senior royals.

Harry and Meghan met with recipients of the Intrepid Valor Awards at The Intrepid Museum’s Salute to Freedom Gala.

When asked by a reporter if she was proud of her husband, Meghan, who looked stunning in a red Carolina Herrera gown, turned around and sweetly replied: “I’m always proud of him.”

The Duke presented the awards to five service members, veterans and military families “living with the invisible wounds of war”.

In his speech, Harry said: “Tonight, we are here to honour a group of men and women whose lives are defined by service, purpose and resilience. This night is about [the honorees].

The couple met the award recipients before the ceremony

“As many of us see it, service isn’t loud. Service is what happens in the quiet and when people aren’t looking. It’s about how we take care of each other every day. It’s about the camaraderie we share…the laughs, the comfort, the pain, the challenge, and yes, the banter.

“Throughout my time in the military and after, I recognised and understood that for many who have served or are still serving – it might not feel right to stand out amongst the team and be recognised. But you deserve to be – and tonight, whether you like it or not, that is what’s happening. So, soak it up!”

MORE: The real reason why Prince Harry and Meghan Markle are not on social media

The Duke, who served in the Army for ten years, also joked he is “living the American dream”.

He said: “It’s wonderful to be back on USS Intrepid a decade after my last visit – and a lot has changed since then. Just last week, I went for a ride on the Oscar Mayer Wienermobile – how’s that for living the American dream.

“I’ve lived in the US for close to two years now. I have to say, witnessing your support for all those that put themselves in harm’s way in defence of our freedoms and liberties – it’s remarkable and hugely respected.

“It reminds me of the deep reverence us Brits have for our military as well. The armed forces communities in both our countries share a special bond.”

'Winter House': Austen Kroll Shades Lindsay Hubbard– 'I Shouldn't Have to Train a 36-Year-Old Woman How to Not Act at WWHL'
Recent Posts