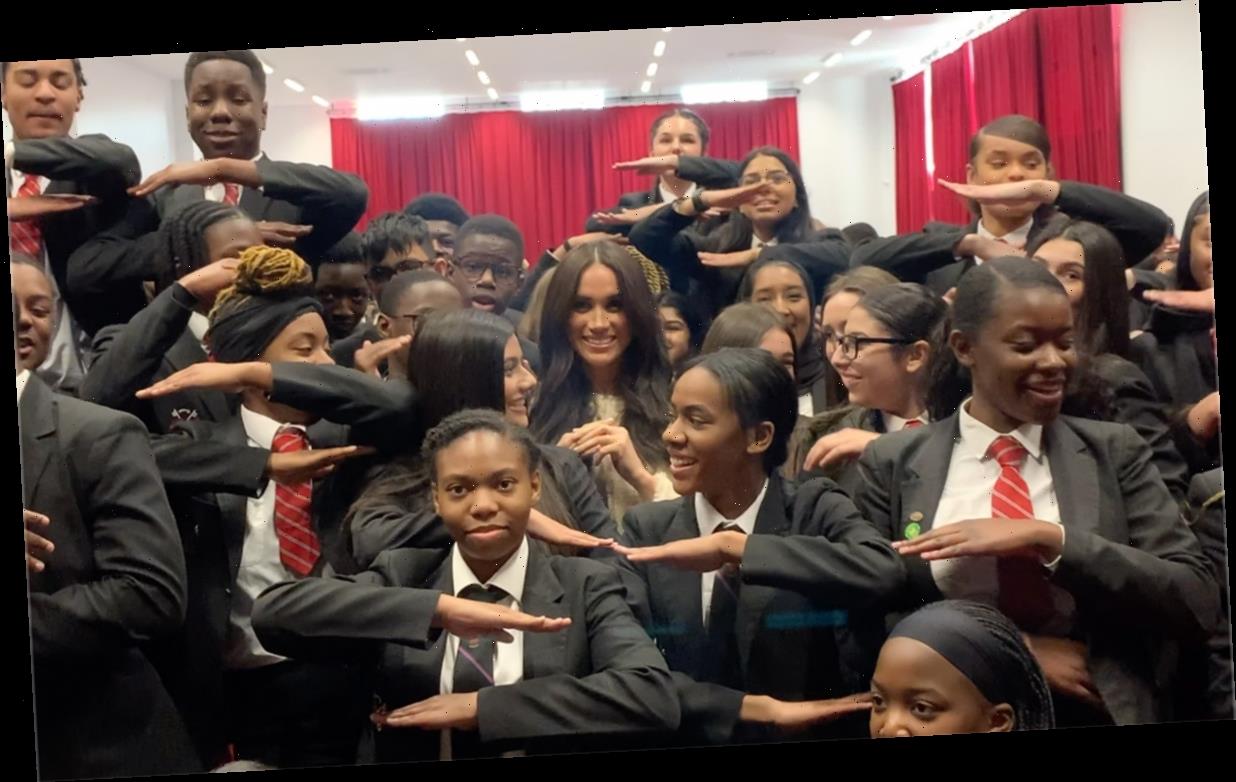 The Duchess of Sussex has called on teenage boys to “value, appreciate and protect” the women in their lives, on a surprise school visit ahead of International Women’s Day. And she urged them to “set the example for some men who are not seeing it that same way”. Her unexpected appearance earned her a cheeky kiss on stage from one 16-year-old boy, who told his classmates, “She really is beautiful, innit”. Meghan stunned pupils at Robert Clack Upper School in Dagenham, East London,
when she appeared at assembly on Friday.

Speaking directly to the boys in the room, she told them: “You have your mothers, sisters, girlfriends in your life. Protect them. Make sure they are feeling valued, and safe. And let’s all just rally together to make International Women’s Day something that’s not just on Sunday but frankly feels like every day of the year.”

The Duchess told youngsters: “When we thought about what I wanted to do for International Women’s Day this year, for me it was incredibly important to be with the women of our future. And that is all of you young women here as well as you young
men who play a very large part in this.

She then decided to “go off the cuff” and asked for for a “brave young man in this room” to talk about the importance of the day. The hall erupted in cheers as Head Boy Aker Okoye, 16, stepped onto the stage and kissed Meghan on the cheek, before saying into the microphone: “She really is beautiful, innit.” The laughing duchess jokingly wagged her finger at him and crossed her arms. “I had to speak the truth there,” said Aker.

He added: “International Women’s Day is a reminder to everyone that women can do it all and do it all. This is more of a message to all you guys. Maybe this Sunday could be the one day we don’t look at women as objects. I just want International Women’s Day for all of us to be a reminder of how strong our community is with women inside.” “Well done. Very well said,” Meghan told him after he hugged her and left the stage to screams and applause.

MORE: Prince Harry and Meghan Markle look incredible as they attend the Mountbatten Festival of Music at the Royal Albert Hall – best photos

MORE: Meghan Markle flies under the radar as she carries out secret London visit

Elegant in a blazer by ME+EM, shoes by Jennifer Chamandi and carrying a bag by London-based Korean designer Rejina Pyo, the Duchess continued: “It’s very easy to sometimes compartmentalise or silo this idea of International Women’s Day as
solely being about women. But it’s not, it’s about all of us.”

Also on stage was Geraldine Dear, one of the “Dagenham Girls”, who went on strike for equal pay at the Ford Motor Plant in 1984. Meghan said of her story, which was turned into a film: “It’s the best example of no matter how small you might feel, or how low you may feel on the ladder or the totem pole; no matter what colour you are, no matter what gender you are, you have a voice and you certainly have the right to speak up for what is right.”

She went on: “So I just encourage and empower each of you to really stand in your truth, to stand for what is right. To continue to respect each other. You young men, to continue to really value and appreciate the women in your lives. And also set the example for some men who are not seeing it that same way.” She then posed with the whole school, holding their arms parallel and bent at the elbow to represent the International Women’s Day symbol.

Speaking afterwards, Aker said his comment on Meghan’s beauty was an “ice- breaker,” adding: “I don’t want to objectify women. It was amazing. It means a lot to have her here. It’s not every day that you meet someone from the royal family. I think it’s very admirable that she’s come from the US to the UK. This is history-making.”

“I think it’s incredible that she can have the strength of character. It truly is inspiring to me. I really was humbled and amazed and inspired.”

Head girl Renee Palmer-Davies, who with Rhyanna Williams, both 16, spoke in assembly about women who inspired them, said: “Meghan is amazing. Everything she’s done for black women and girls. Actually, for anyone. She’s so humble, extremely kind, and it was an honour to meet her today. I was extremely nervous but she made me feel comfortable. She was like a long-
time friend. This is the best day. There is no day that could top this.”

Meghan also spoke to pupils about her son Archie, now 10 months old, saying he has “started trying to walk”. Year 13 pupil Olivia Collins said: “She was talking about how having Archie has changed her life and how important motherhood is. It’s important that people who are looked up to like the Duchess are open about that sort of thing and can say what’s important about female empowerment is that it [motherhood] is a choice. It was really refreshing. Rather than her just coming and saying, ‘I’m a strong independent woman’ – that stereotypical female empowerment – but to say actually I’m just a normal mum as
well.”

Earlier the Duchess had greeted her hosts with a handshake, telling them, “It’s ok!” after they appeared uncertain because of the Coronavirus threat. She accepted a posy from Fiona Addai and Harvi Shehi, both 11 and met Year Nine pupils studying poets including Maya Angelou, in the school library. Outside she walked through a corridor of around 250 cheering pupils, touching hands with them telling one emotional girl: “I’m so happy to meet you too.”

Meghan and Harry at the Mountbatten Festival of Music

The Duchess also heard students practising debating skills for a Model United Nations event, telling them: “This room, you are all just so eloquent and incredibly well spoken. What are you all,16? I’m sorry, 17! When you get older, then you’re not
pushing for that extra year! It’s incredibly impressive and I’m just so proud to be able to witness so much of this activism and this energy that you have in this room. Because it’s how we’re going to see an impact on the world that we need.”

She was then presented with a jacket as an honorary member of the debating society. Fiona, who gave the Duchess flowers, said she had “taught me no matter what colour you are, I am able to do anything any other person can”.

Meghan joined Harry at the Mountbatten Festival of Music at the Royal Albert Hall on Saturday night and the couple will carry out their final engagement before stepping down as working royals on Monday, when they join the Queen and the rest of the family at the Commonwealth Day Service at Westminster Abbey.