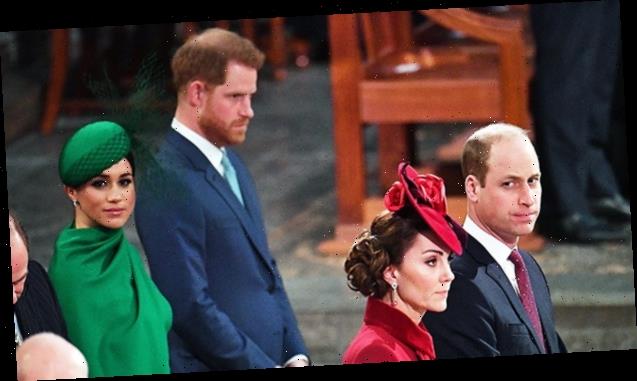 Meghan Markle & Prince Harry reunited with Prince William & Kate Middleton on Commonwealth Day in London, yet awkwardly sat apart from each other for the proceedings in Westminster Abbey.

The royal family, including Prince William and Duchess Kate Middleton, reunited with Prince Harry and Meghan Markle since the Duke and Duchess of Sussex announced that they would be stepping away from their royal duties in January 2020. The two royal couples, along with Queen Elizabeth II, Prince Charles and Duchess Camilla attended Commonwealth Day at Westminster Abbey in London on March 9, marking their final royal appearance.

Meghan and Prince Harry arrived to the event first, with Meghan sporting a stunning, emerald green monochromatic look by Emilia Wickstead. Meghan’s ensemble featured a glamorous cape on her shoulder, along with a matching fascinator designed by William Chambers with a birdcage veil. Kate wore a deep red ensemble by Catherine Walker & Co as she arrived with Prince William. Her long coat hit a hem around her knees with military style buttons running up her torso. Kate’s chapeau also featured a stunning red rose.

Inside Westminster Abbey, Prince Harry and Meghan noticeably sat one row behind Prince William and Kate. Furthermore, Prince William didn’t extend a formal, friendly greeting to his younger brother and sister-in-law, instead simply nodding and saying hello before taking his seat with Kate. The event marks one of the very last that Prince Harry and Meghan will attend, per the decision that was made between the two and Buckingham Palace.

Prince Harry and Meghan will have roughly one year for their transitional period before they officially step away from the obligations of royal life, according to a report. The royal couple “have agreed to an initial 12-month review to ensure the arrangement works for all parties,” which will begin March 31. Some of the changes that will be made include the two no longer having an office at Buckingham Palace and will, instead, be represented by their foundation team beginning April 1. Although Prince Harry, who has recently asked to go just by Harry, and Meghan will no longer retain their “Duke and Duchess” titles, they will still maintain the monikers The Earl & Countess of Dumbarton and The Baron & Baroness Kilkeel, among various other accommodations.

The changes come after weeks of negotiation between Prince Harry, Meghan, and Buckingham Palace. Although the couple were adamant about their move to North America and subsequent decision to step away from royal duties, Queen Elizabeth II had some stipulations that needed to be met. Therefore, discussion between the pair and Buckingham Palace ensued, leading to the final decisions and previsions that would be made so that Prince Harry and Meghan can start this thrilling new chapter of their life unencumbered by the pressures of royal life and prying media.

Although the decision was a difficult one to come to, Prince Harry spoke candidly at the Ivy Chelsea Club in London on Jan. 19 that it was the only option for him and his young family. “Once Meghan and I were married, we were excited, we were hopeful, and we were here to serve. For those reasons, it brings me great sadness that it has come to this,” he shared with the event’s attendants.  “The decision that I have made for my wife and I to step back, is not one I made lightly. It was so many months of talks after so many years of challenges,” he continued. “And I know I haven’t always gotten it right, but as far as this goes, there really was no other option.”