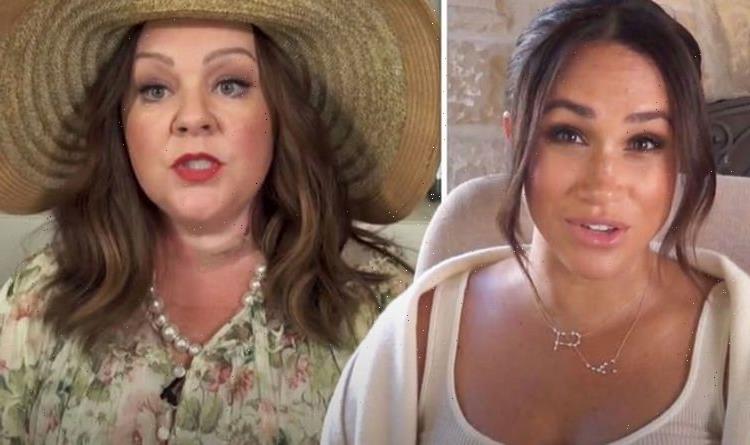 Yesterday Meghan Markle released a video asking for 40 friends to donate 40 minutes of mentorship to mark her milestone birthday. The Duchess of Sussex asked her pals for their time “to support women re-entering the workforce” after the coronavirus pandemic and the video featured actor Melissa McCarthy. But some viewers paid more attention to the giant plaster covering the Spy star’s neck than to what was being announced, as one fan said she “couldn’t stop looking” at the bandage covering the actors injury.

In the video, Meghan looked chic in a cream coloured outfit to celebrate her big day.

She finished off her at-home look by framing her face with a loose hairstyle and adding layers of necklaces.

In comparison, Melissa greeted the Suits star in casual attire, before realising her video was turned on and promptly going to change.

Upon returning, the Gilmore Girls actor sported a large floral fascinator, white gloves and a floral dress, while gripping a cup of tea in dainty china.

However, the floral dress did nothing to cover up the large plaster on the side of Melissa’s neck, which she previously revealed was the result of a terrifying spider bite while filming in Australia.

One social media user took to Twitter to reveal that their attention was wholly on the actor’s neck during the video, saying: “I could not stop looking at the bandage on Melissa McCarthy’s neck.

“I spent most of the video wondering how she got that and why the bandage wasn’t sticking,” they penned.

Earlier in the year the award-winning actor shared a video to Instagram of herself recovering after being bitten.

She told her 9.6 million followers how she felt itchy and unwell while lying in bed, covered in cool towels to reduce the swelling.

With her hands wrapped in bandages, the star said: “I love that all the bugs and creatures will kill you.”

“I love that I’ve seen a spider the size of my head,” she went on while lying down.

The actor explained that the symptoms of the bites had affected her whole body, adding: “I’m itchy! It’s reached my face. Pretty puffy guys.”

Melissa wrote next to the video: “After professing my love of Australian critters to InStyle magazine, I was quickly reminded by someone that I was conveniently forgetting the aftermath of some of those ‘magical’ bites.”

The star travelled down under to film the upcoming TV series Nine Perfect Strangers, which is based on the novel of the same name by the author of Big Little Lies, Liane Moriarty.

The TV show follows the lives of nine people who attend a wellness retreat run by Nicole Kidman.

Commenting on Melissa and Meghan’s video, Will and Grace actor Debra Messing penned: “Melissa you are such a National Treasure. That’s it. That’s the whole post.”

Referencing a tattoo of the duo that the Thunder Force actor suggested Meghan gets to mark her birthday, another added: “I NEED THAT TATTOO #slay.”

Addressing Meghan’s idea, another wrote: “Two of my favourite women being their glorious selves and helping other women.”

In the video, Melissa suggests that Meghan celebrate her milestone birthday by getting matching tattoos of their faces.

When Meghan shot the idea down, the Ghostbusters actor asked whether the Duchess of Sussex was planning a Suits reunion.

At the end of the video, Prince Harry makes a surprise cameo appearance outside of the window, making both women laugh.