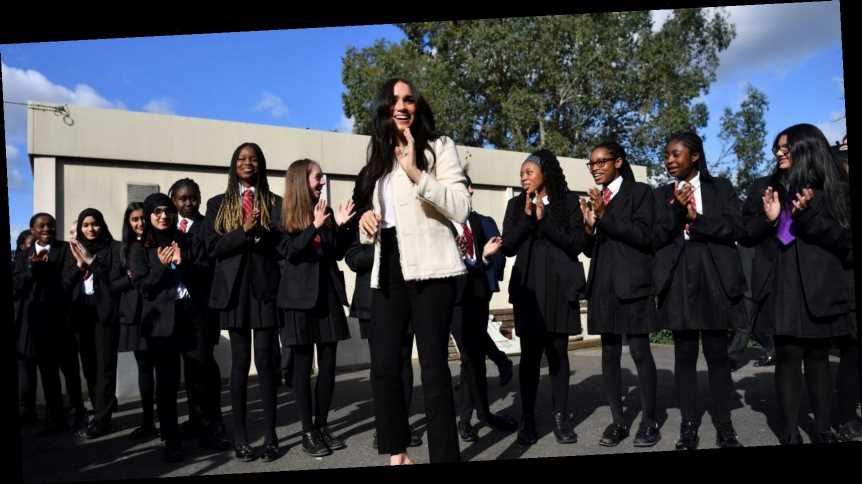 During her visit to The Robert Clack Upper School in East London on Friday to mark International Women’s Day, Meghan Markle took to the stage to celebrate the young women in front of her – and appealed to the school’s young men to get involved in the movement.

Meghan Markle may have arrived in the UK for her final appearance as a senior royal, but her words have been full of hope for the future.

During her visit to Robert Clack School in East London on Friday, Meghan took to the stage to make a speech in honour of International Women’s Day. In the speech, which included a short appearance from one of the school’s students, Meghan reflected on the future of equality across the world, urging the school’s young men to support the women in their lives.

“It is such an honour for me to be here today,” she told the students. “When we thought about what I wanted to do for International Women’s Day this year, for me, it was incredibly important to be with the women of our future. And that is all of you young women here, as well as you, the young men, who play a very large part in this.”

Reflecting on the history of Dagenham, where the school is located, Meghan took the chance to honour the sewing machinists who went on strike there in the 1960s – a move which led to the landmark Equal Pay Act.

“I think specifically coming to your school made a lot of sense for me because of this social justice and the impact that it’s rooted in,” she said. “Being in Dagenham is incredibly profound. Geraldine and the other women had the strength to really stand up for something that needed to be done.”

She continued: “It is the best example of no matter how small you might feel, how low you may feel on the ladder or the totem pole, no matter what colour you are, no matter what gender you are, you have a voice and you certainly have the right to speak up for what is right.”

Meghan also appealed to the school’s young men to make sure they were included in the International Women’s Day movement, encouraging them to respect and honour the women in their lives.

“In many societies it doesn’t matter where you are, it’s very easy to sometimes compartmentalise or silo this idea of International Women’s Day solely being about women. But it’s not… it’s about all of us,” she said.

“Continue to value and appreciate the women in your lives, and also set the example for some men who are not seeing it that same way. You have your mothers, sisters, girlfriends, friends in your life – protect them.

“Make sure that they are feeling valued and safe. Let’s all rally together to make International Women’s Day something that is not just on Sunday, but, frankly, feels like every day of the year.”

The Duchess of Sussex is back in the UK alongside her husband Prince Harry for their final appearance as senior royals before they step back on 31 March. The move comes after Meghan faced relentless criticism at the hands of the UK’s tabloids; just recently, she was criticised for leaving her and Harry’s son Archie behind in Canada during their trip to the UK, with some tabloids suggesting her move was down to pure “spite”, with the sole aim of upsetting the Queen.

But her final solo royal appearance sent a very powerful message: that despite all of the hate, criticism and vitriol thrown her way, Meghan will continue to do what she has always done – stand up for women’s rights.

We couldn’t think of a better way to celebrate International Women’s Day.

American Idol 5th Judge: Sorry Dawg, But Pat Sajak Is Not a Judge on This Show
Recent Posts