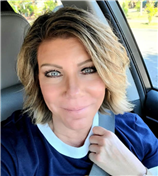 As anyone who has tuned in for almost any episode of Sister Wives over the past year or so knows well, Kody Brown does not treat Meri Brown well.

He doesn’t even pretend to do so.

We’re talking about a polygamous husband who has openly admitted that polygamy is really pretty awful, and who even said a few months ago that he doesn’t want to sleep with Meri.

Here’s the thing, though.

Here’s the reason why you need not feel bad for Meri:

The long-time TLC personality has tried to make this eviident for awhile now.

She has used her social media platform to emphasize that she creates her own happiness and that she’s on a continual journey these days that has nothing to do with her cruel spouse.

“Road trippin’ it again today! Definitely one of my favorite things to do!!” Meri wrote as an Instagram caption a few days ago, including along with it a selfie from a front car seat.

“I always have something amazing to listen to while I drive, and I do plenty of driving!

“Today will be like my own personal training session with the amazing and inspiring @danelledelgado.”

She concluded as follows:

Today I rise, today I fill my cup, today I win on repeat!!

It feels worth noting some of the hashtags she used to wrap up this post as well: #LoveWhoIAm, #WinOnRepeat, #CantStopMe, #IChooseJoy.

The reality star’s fans were quick to praise Meri on her positive mindset, pointing out that she looks more content than ever beforre.

“I’ve followed your journey for years and I’m so happy to see YOU are happy,” one follower applauded, for example.

“You have never looked happier,” another social media user insisted, while a third chimed in with a similar sentiment:

“You seem so happy and look so beautiful and peaceful. Nothing like on your show.”

Meri has been traveling all over the place of late.

She went to Cancun as part of a business trip late this summer and just raised a number of eyebrows by not just heading to Florida — but by posing with someone very much NOT her husband while in The Sunshine State.

By all accounts, this individual is just a friend.

He’s gay, some observers have even pointed out, and he’s known Meri for a long time.

It doesn’t matter that Meri hasn’t found a new lover.

What matters is that she’s found something else, something Kody has not been able to provide for her for ages now it seems: