Home » Celebrities » Oprah Praises Harry and Meghan for Willing to Be ‘Open, Vulnerable, and Truthful’ in Interview 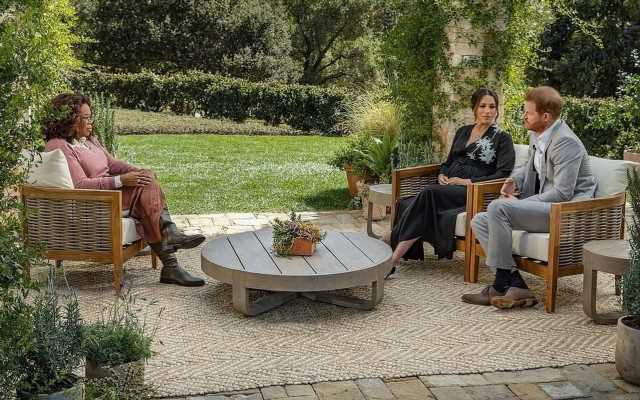 Oprah Praises Harry and Meghan for Willing to Be ‘Open, Vulnerable, and Truthful’ in Interview

Oprah Winfrey commends the Duke and Duchess of Sussex for ‘willing to be as open, as vulnerable, as truthful, as they were’ during the bombshell interview.

AceShowbiz –Oprah Winfrey was shocked that the Duke and Duchess of Sussex were so open in their interview with her.

The couple spoke to Oprah last month (Mar21) for a bombshell interview in which they made some shocking claims, including allegations of racism in the Royal Family.

Speaking at the launch of Nancy O’Dell‘s Channel on talkshoplive, where she was promoting her book “What Happened To You? Conversations on Trauma, Resilience, and Healing“, Oprah confessed, “I had no idea that it would have the reverberating impact it has had and continues to have. I did a lot of preparation for that.”

“(I was shocked when Meghan said that royal family members had) conversations with Harry about how dark (Archie’s) skin might be when he’s born.”

Oprah admitted many of the revelations made by Prince Harry and Meghan came as a surprise to her as she had not discussed details with them before filming.

She said, “Whenever I’m doing interviews with anybody for anything that is significant, I have a conversation with them before.”

“I didn’t see Harry and Meghan before but I did text them and say intention is very important to me, tell me what your intention is, so that we can be aligned in our goal. And our shared intention was the truth. They wanted to be able to tell their story and tell it in such a way that allowed them to be as truthful as possible.”

“The reason why it was such a powerful interview – first of all, I know how to ask questions, but what makes it powerful is when you have someone else who is willing to be as open, as vulnerable, as truthful, as they were.”

Oprah also revealed she made a personal plea to the crew not to leak any details of the interview before it was shown on TV.

She said, “I remember when we finished doing the interview and that interview was three hours and 20 minutes I think, and I stood up and said to the crew, we all know what was said here, and how important it is to have the trust of the people who just shared that, and so I’m hoping you all will not go out into the world and share what has happened here. And nobody did.”