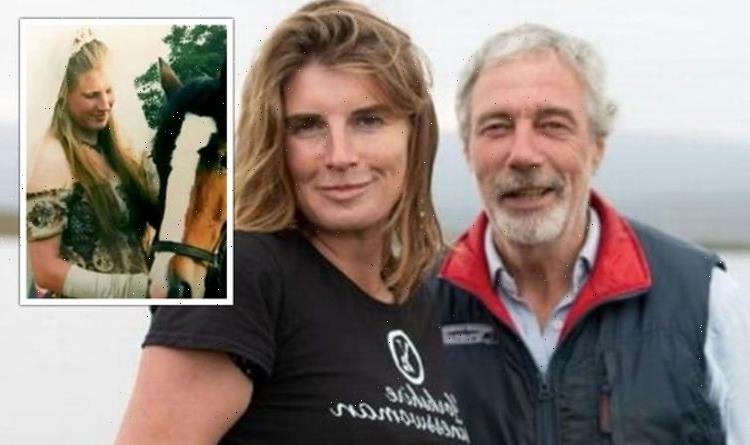 Amanda Owen, who is the star of Our Yorkshire Farm, looked worlds away from her usual self in a candid throwback photo. The shepherdess and her husband Clive Owen met in 1995 and tied the knot five years later.

It comes as the couple released a statement this week confirming that their marriage is going through a “rocky patch”.

Amanda, 47, and Clive, 66, have been married for 21 years and share nine children together.

The Yorkshire family, who have captivated audiences on their Channel 5 reality show, admitted that their marriage is not perfect.

On October 12, a representative for the shepherdess said they hadn’t split and that she hadn’t moved out of the family home in Swaledale as claimed.

In an unearthed wedding snap, a young Amanda could be seen wearing an off-the-shoulder gown.

The shepherdess opted to forego the traditional white wedding dress, with a cream coloured outfit that was embossed.

She accessorised her look with a veil where she sported much longer locks.

Amanda was pictured admiring a horse that stood between herself and her husband Clive.

The farmer looked smart in a blazer which he accessorised with a waistcoat.

Now, Amanda is often seen in activewear or gorgeous mini dresses as she tends to her farm.

The couple star in their Channel 5 reality series, based on life on their Ravenseat Farm, with their nine children.

Amanda and Clive have spoken out after reports claimed that the mum-of-nine had spent nights away from the family home.

In a joint statement, they said: “With the TV show and the books we’ve always aimed to show the reality of life on the farm, and just like any marriage we have our stresses and strains, coupled with all the complexities of what we do on the farm and bringing up nine kids.

“We’re a normal family and we’ve never said our marriage is perfect.

“Unfortunately the constant intrusion into our lives from the media has amplified a rocky patch that we’re going through.

“We ask that the media respect our privacy as we work through this.”

Amanda has since shared a candid post from TV personality Ben Fogle who offered his support to the couple.

Taking to social media, he said that he always “sticks up for friends”.

Ben added: “Amanda, Clive and the Owen family are the most honest, kind, hard working folk I have ever had the pleasure to meet.”

Just Starting Out? Set Yourself Up For Success