Home » Celebrities » Patrick Mendes Admits to Cheating on Thais Ramone: Its in the Past! 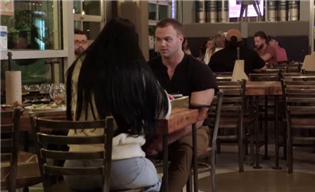 Patrick Mendes Admits to Cheating on Thais Ramone: Its in the Past!

On last weekend’s episode of 90 Day Fiance, Patrick Mendes left that nice house in Austin for his new home in Dallas.

Thais Ramone was less than happy with the move, mostly because John would still be living with them.

From the start, fans have been concerned about Thais, especially over her intrusive tracking of Patrick’s phone.

Now, however, we know why she went to such extremes to keep track of Patrick: he cheated on her.

It’s not a Christmas present, he says, but a welcome-to-America present: a new phone.

The phone does come with one caveat: he will not be giving her access to his location at every moment anymore.

Though she is still going to accept the phone (he tells her that he could always refuse the gift), it feels almost like a trick.

Meanwhile, Patrick explains that the time of her tracking his location should now be over.

Patrick — along with some seemingly random bar patrons during his first episode — understood the desire to track him when she was in Brazil.

Now, though, she doesn’t have to guess when he’s asleep in his bed, because she’s in the same bed.

“This gives me a lot of anxiety, love,” Patrick explains to her.

“It feels bad when I’m with somebody and they’re the love of my life,” Patrick explains.

“And they don’t trust me,” he continues. “It doesn’t feel good.”

This is when Thais reminds Patrick that her concern about his faithfulness was not conjured out of thin air.

Thais notes that Patrick once gave her a reason to not trust him.

Patrick dismisses this as “in the past,” but she presses him to admit on camera why she is so concerned.

This is when he says that he simply “spoke to a girl” early in his relationship with Thais. But is that the truth of it?

But if all that he did was speak to another woman, then the only thing that he would have done with his mouth is, you know, form and vocalize words.

That is not the case, Thais says, since he hooked up with her.

Patrick objects, revising his story to say that all that they did was “kiss,” but a kiss is not talking, Patrick.

Patrick tries to do some mental gymnastics: “I think it’s different, like when you kiss a girl between have sex with a girl.”

One, hooking up is a deliberately vague (and downright inclusive) term that can mean everything from four-person shower sex to making out.

So, yes, they hooked up.

Two, you don’t generally get to decide that what you did physically with another person was not cheating.

You and your partner(s) set those boundaries together.

So, yes, it was cheating, even if some relationships wouldn’t consider a kiss to be cheating — that has nothing to do with Thais and Patrick.

Patrick is not taking this seriously, it seems, but Thais is clearly hurt.

On the one hand, she can’t and should not hold this over his head forever — either let him earn back your trust, or leave him.

At the same time, he needs to take her feelings seriously, even if that does not include her tracking his location anymore.

Patrick is a handsome guy who makes good money, so his behavior would have to be wildly out-of-line for the majority of 90 Day Fiance fans to dislike him.

(Case in point: Bilal and the Lifetime movie plot that he’s putting Shaeeda through)

But that doesn’t mean that Thais (who, as an attractive young woman with an accent, is baiting the fandom’s worst elements) is a bad guy, or even unreasonable.