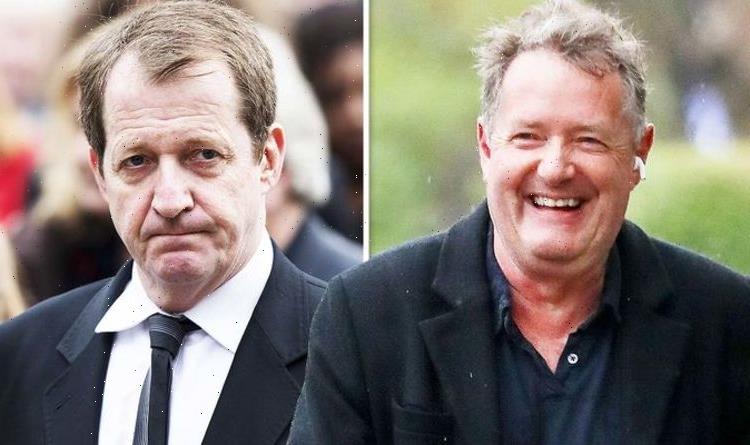 It’s been nearly two months since Piers famously quit GMB over comments related to Meghan Markle. The 56-year-old remarked “I don’t believe a word she says” after bombshell claims emerged from the Sussexes’ interview with Oprah Winfrey. Soon after, Piers was called out by weatherman Alex Beresford and stormed off the ITV show. Next month, Campbell will sit in Piers’ old seat alongside Susanna Reid to front GMB during Mental Health Awareness Week. 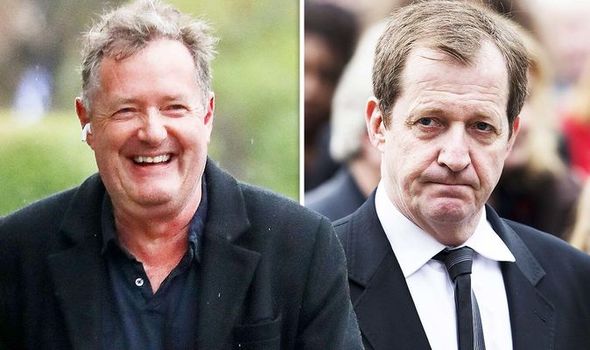 Ahead of the former Labour spin doctor’s appearance, the official GMB Twitter account teased “some fiery debates” on the show.

In a comment, which was signed off with a fire emoji, they wrote: “Welcome to the team! We can’t wait… don’t hold back.”

Piers responded to the tweet with the warning to his former foe Campbell: “I’d hold back.”

Campbell silenced rumours that he was the GMB star’s replacement in a tweet, noting: “Checking the presenter chair… No, I am NOT the new @PiersMorgan.”

Piers has a longstanding feud with Campbell.

While serving at the helm of The Daily Mirror, the editor mocked Campbell after he misunderstood a plot to undermine his media mogul rival, Rupert Murdoch.

The then-editor admitted he was surprised by the sportsman’s confidence during a press conference ahead of the clash in 2000.

JUST IN: Susanna Reid quipped ‘replace me with Meghan Markle’ before Harry snub

Piers was less certain of the boxer’s bravado but “an amusing idea” flashed into his mind.

In his 2005 memoir, The Insider: The Private Diaries Of A Scandalous Decade, he recalled the cheeky idea.

Piers believed Francis “lasting even one round” against the former heavyweight world champion was extremely unlikely.

He described the legendary boxer’s challenger as “a big useless lump” but called his agent Frank to make a proposition.

Piers asked the manager how much it would cost to have The Mirror’s logo on Francis’ clothing.

He recalled: “I could tell Frank was rather surprised, ‘Are you serious?’ he said.”

Piers told the agent that he was “very” serious before unveiling his extremely sneaky plot.

He explained: “But there are very specific parts of his anatomy that we wish to sponsor.”

Piers recalled: “‘Well, the back of his shorts and the soles of his boots’ – there was a pause as the penny dropped.”

Frank, who he branded “a smart cookie”, responded: “What, so when Tyson bangs him over, everyone sees the Mirror logo, right?”

Piers laughed before he confirmed: “Yes, that’s about the gist of it.”

The editor claimed “Frank thought it was hilarious” and after floating the idea past Francis, he demanded £20,000 for the sponsorship deal.

After the fight, Piers gleefully noted the boxer was “knocked over five times in two rounds” and continuously fell onto his hands and knees after Tyson’s power jabs.

He recalled: “The viewers watching on TV were shown regular, large images of his backside and the soles of his feet – all sporting large red-and-white Mirror logos.”

Piers claimed it was “funnier” because the show was being broadcast by Sky, which was owned by Murdoch.

He boasted about “getting unbelievable publicity on our biggest rival’s network” and claimed to have watched the fight with ‘tears of laughter rolling down my face”.

The next day, Campbell faxed Piers: “What’s the point of sponsoring the back of a boxer’s shorts if he spends most of the fight sitting on them?”

The journalist replied: “I know you’re a halfwit but surely even you can see that Julius kept falling forward thereby revealing our logo to the world.”

Piers then took a heft jab of his own: “Now we’re in the mood for sponsoring heroic failures, how about Tony [Blair]’s teeth for the next election?”

Campbell didn’t respond but contrary to Piers’ prediction, Labour won the 2001 general election by a landslide after getting 418 seats.

The Conservatives, who were led by William Hague, gained 165 seats and the Liberal Democrats, under Charles Kennedy, managed 46.

Piers Morgan’s The Insider: The Private Diaries Of A Scandalous Decade was published by Ebury Press in 2005. It’s available here.