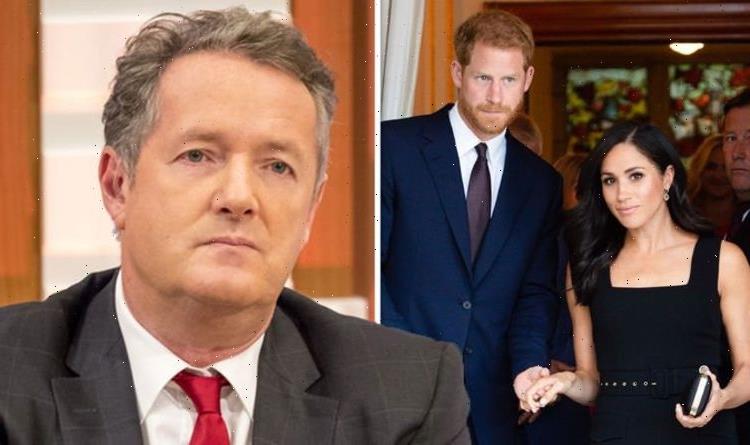 Meghan and Harry need to ‘pipe down’ says Piers Morgan

Piers Morgan received a large number of complaints according to media regulator Ofcom. This comes after the regulator received the highest amount of complaints since it started in 2002, according to reports. The former Good Morning Britain host reacted after finding out he accounts for four of the 10 most complained about TV broadcasts.

Piers’ comments on the Duke and Duchess of Sussex’s Oprah Winfrey TV interview on Good Morning Britain in March drew a record 54,453 complaints.

The 56-year-old took to Twitter and has since reacted to Ofcom’s complaints record as he hit out at the media regulator.

Piers retweeted an article which read: “@piersmorgan bagged four spots in the top 10 most complained moments of the last 12 months.”

The former GMB presenter reacted, in view of his 7.9 million followers, with a smiley-face emoji sporting sunglasses.

During her landmark chat alongside Prince Harry, Meghan opened up about racism she had experienced as well as her own mental health.

The Duchess of Sussex told Oprah how she had felt suicidal at times after joining the Royal Family.

On the morning after it aired in the US, Piers told GMB viewers how he didn’t believe anything Meghan had said.

This led to condemnation from many on social media and sparked over 50,000 Ofcom complaints.

Piers chose to leave GMB in March rather than retract his criticisms of the Duchess of Sussex.

Dance troupe Diversity received the second most complaints with their routine on Britain’s Got Talent, which sparked 25,017 complaints, despite going on to win a Bafta TV Award.

An Ofcom spokesperson told Metro.co.uk: “We’re a nation of TV lovers, and it’s kept us entertained and informed like never before during lockdown.

“But, from time to time, viewers see things that trouble them, and that’s where we come in.”

They added: “We assess every complaint we receive, and while we don’t step in lightly given the importance of free speech we take strong action where we find serious harm to audiences.”

Following Piers’ departure from GMB several guest presenters have since taken his place on alongside Susanna Reid, including Alastair Campbell and Adil Ray.

But despite his exit from the morning programme the broadcaster still works for ITV.

Piers has continued with his Life Stories where he has in-depth interviews with famous faces.

Other guests have included Chris Eubanks, Gemma Collins and Vinnie Jones to name just a few.

Following his exit from GMB, Piers has remained vocal on social media and often shares his views on a variety of topics.

Upcoming MCU Movies and TV From 'Eternals' to 'Fantastic Four'