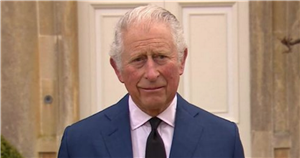 Prince Charles has broken his silence on the death of his father Prince Philip.

The Duke of Edinburgh, 99, passed away earlier this week at home in Windsor with his wife the Queen by his side.

Speaking to press from Windsor Castle, his son said: "My father, I suppose the last 70 years, has given the most remarkable devoted service to the Queen, to my family, and to the country, and also to the whole of the Commonwealth.

“As you can imagine my family and I miss my father enormously, he was a much loved and appreciated figure.

"Apart from anything else, I can imagine him so deeply touched by the number of other people here, and elsewhere around the world and in the Commonwealth who also share our loss and our sorrow.

"My dear papa was a very special person who, I think above all else, would have been amazed by the reaction and the touching things that have been said about him.

He went on to say that for this he and his family were “deeply grateful”.

Buckingham Palace confirmed that the Queen's husband had died on Friday 8 April.

They released a statement, which read: “It is with deep sorrow that Her Majesty The Queen announces the death of her beloved husband, His Royal Highness The Prince Philip, Duke of Edinburgh.

"His Royal Highness passed away peacefully this morning at Windsor Castle.

"Further announcements will made in due course.

"The Royal Family join with people around the world in mourning his loss."

The Duke of Edinburgh had been due to turn 100 in June.

The Queen and Prince Philip were married for 73 years and she once described him as her "strength and stay."

The Queen is expected to now start an immediate eight day period of mourning.

During this time, the monarch will not carry out royal duties, new bills will not be given Royal Assent to become law and state affairs will be suspended as a mark of respect.

The entire Royal Family are expected to enter an official grieving period for 30 days following these eight days.

How Prince Philip’s Death Changes Things For Prince William, According To An Expert