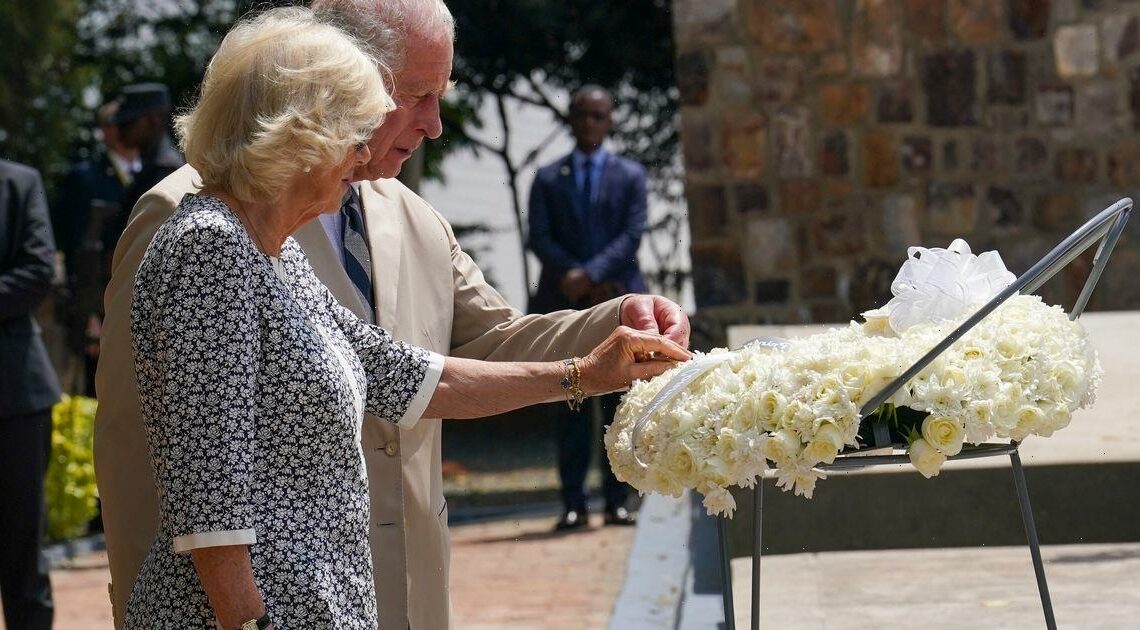 The Prince of Wales and Duchess of Cornwall appeared visibly distressed as they heard about the atrocities committed during the Rwandan genocide.

Charles and Camilla learned about the murder of children during the violence as they toured the Kigali Genocide Memorial, with the royal couple being shown the personal testimonies of families who donated pictures of smiling children and listed touching personal details about their loved ones.

The couple read intently about the youngsters murdered during the 1994 genocide, and Charles reacted by saying: “Terrible, happens all too often.”

His wife lamented “what humans can do to humans”.

The duchess bonded with one survivor of the genocide during her visit, when she was hugged by Uzamukunda Walida who was gang raped but now openly discusses her experience.

In 1994, hundreds of thousands of members of the Tutsi community were slaughtered in Rwanda by ethnic Hutu extremists.

The remains of an estimated 250,000 victims are buried in the grounds of the memorial, which features an education centre, where the couple laid a wreath of white blooms, with a handwritten card by Charles that read: “In everlasting remembrance of those who died in the genocide against the Tutsi.”

As the couple toured the centre they were taken to a room where hundreds of pictures of victims were on display and spent several minutes looking into the faces of the those killed by their countrymen and women.

The royal couple were joined by Freddy Mutanguha, executive director of the Aegis Trust, a UK-based organisation working to prevent genocide worldwide, which manages the memorial.

He survived the genocide and, as he told the couple: “If I count my extended family I lost 80 members,” an incredulous duchess repeated the number, “80”.

Mr Mutanguha described how he still hears the “voices” in his nightmares of the people who attacked his mother.

When Charles and Camilla toured a series of rooms dedicated to the child victims they read the poignant description of 12-year-old Francine, who was hacked to death with a machete, which listed her favourites – from swimming to eating egg and chips.

Later the couple sat down for an informal chat with a small group of women survivors of the atrocities and the royals warmly greeted the group and the duchess was embraced.

Mary Balikungeri, founder and director of the Rwanda Women’s Network (RWN), hosted the meeting and afterwards said about the woman hugged by Camilla: “This woman was one of the people who was gang raped and became pregnant.”

She was later supported by a RWN project, the Polyclinic of Hope, a centre for female victims of violence.

The director added: “They helped her go through the process of healing and supported her medically and now she’s back on her feet and giving back to the community.”

Ms Walida said through an interpreter: “The duchess said she was very happy to meet us and my story touched them.”

Before leaving the couple looked at crafts made by the women as part of their healing process as they discuss their issues as they work.

Mr Mutanguha said after the visit that the prince and duchess were “sad” to hear his life history, but were glad he had survived – that was the positive aspect of the story.

He added: “It’s really comforting seeing Prince Charles and the Duchess of Cornwall paying respect to the victims of genocide.

“And we know that he has a strong voice that may help to silence denials of genocide.”