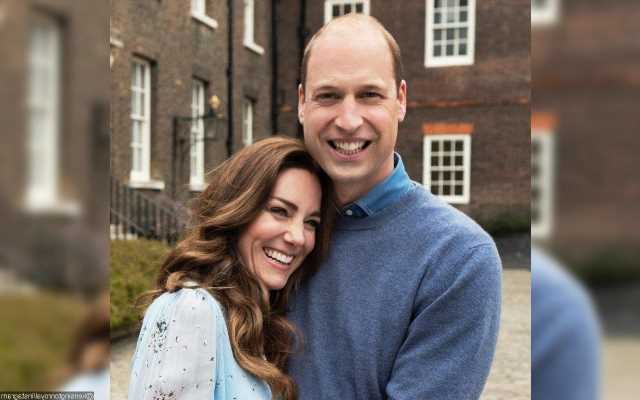 The Duke and Duchess of Cambridge commemorate a decade of their marriage by sharing via their official Instagram account two new intimate photos taken at Kensington Palace.

AceShowbiz -One decade down, forever to go. Prince William and Kate Middleton will be celebrating their 10th wedding anniversary on Thursday, April 29. Ahead of the big day, the royal couple decided to share romantic photos of them with the public.

On late Wednesday, April 28, the Duke and Duchess of Cambridge put out on their official Instagram account a portrait of them that displayed William gazing lovingly at Kate who is smiling widely. “Ten years,” the caption of their post read.

In another post, the royal couple were seen getting cuddly as they posed with their arms wrapped around each other. William sported a blue sweater with blue shirt underneath and dark pants, while Kate looked stunning in patterned wrap dress with a sheer material. Both pictures were taken at Kensington Palace by photographer Chris Floyd.

Many fans have since showered the happy couple with congratulatory messages. “HAPPY ANNIVERSARY! They’ve been through so much together…. almost 20 years together and 10 years of marriage,” one commented. Another wrote, “The most romantic photo, happy 10th year anniversary to our beloved Duke and Duchess.”

The day before, William and Kate shared photos and a clip of them enjoying a visit to Cheesy Waffles Project in County Durham. During the visit, the two took turns at teeing off golf balls. “Thank you to the Cheesy Waffles Project for the golf lesson. Think we might need to come back for more…,” the royal couple captioned the post.

The Duke and Duchess of Cambridge wed on April 29, 2011. Since then, the grandson of Queen Elizabeth II and his wife have welcomed three children together, 7-year-old Prince George, 6-year-old Princess Charlotte and 3-year-old Prince Louis.

Their wedding was held before 1,900 guests at Westminster Abbey in London. Millions around the globe watched the extravagant ceremony during which Kate dazzled in a wedding dress by Sarah Burton for Alexander McQueen.

What does the new 1257L tax code mean and how do I check mine is correct?