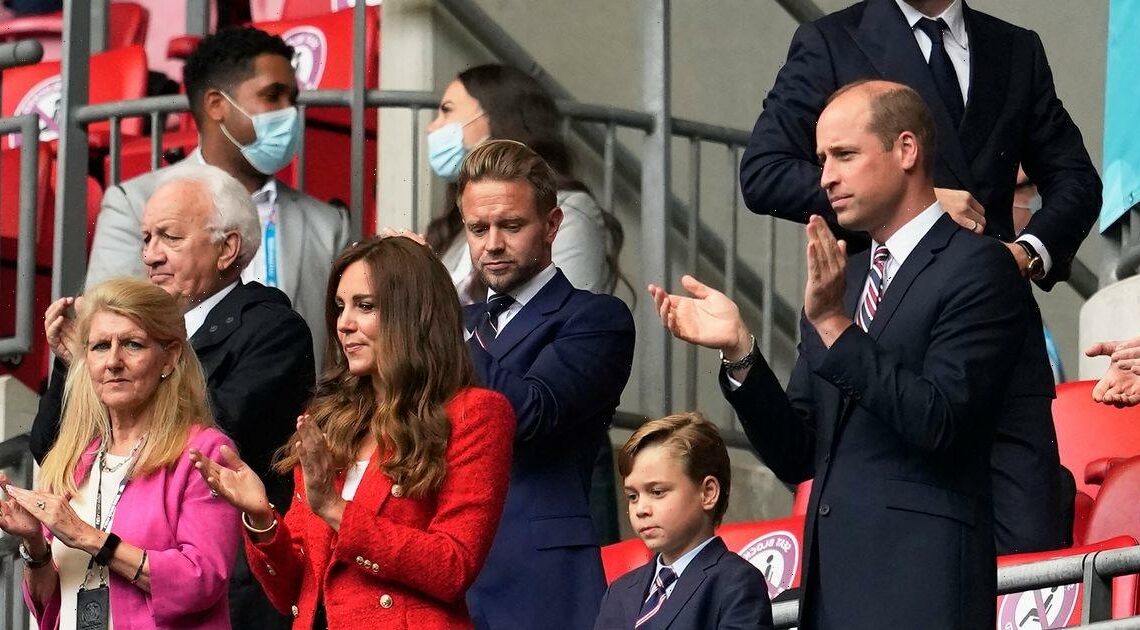 Prince William and his wife Kate Middleton happily cheered on England with their son George as they emerged victorious against Germany in the Euros.

And royal expert Duncan Larcombe believes that the happy family image could have been a direct signal to William's brother Harry ahead of their reunion later this week.

The feuding brothers are set to face each other on Thursday 1 July for the unveiling of their late mother Princess Diana's statue and Harry has been isolating at Frogmore Cottage since flying into the UK last week from LA.

"Harry won't have been able to go to the game as he's still in his isolation period so he will have watched alone from Frogmore cottage," Duncan tells OK!

"It will have been a stark contrast to seeing William and Kate and George cheering on their country and putting on a united front as a family.

"William and Kate don't do things by accident and I think this will have been a deliberate signal they were sending to Harry ahead of Thursday."

Ahead of the unveiling of the statue of his late mother Princess Diana, Prince Harry mentioned his brother, Prince William, while speaking in an awards ceremony video.

Speaking to a group young people after a virtual ceremony for the The Diana Award, Harry said: “I'm truly honoured to be celebrating your work, your commitment to change making and the vital role that you've taken on representing a new generation of humanitarianism.

"Later this week, my brother and I are recognising what would have been our mum's 60th birthday, and she would be so proud of you all for living authentic life with purpose and with compassion for others."

"Our mum believed that young people have the power to change the world.

"She believed in your strength because she saw it day in and day out and in the faces of young people exactly like you, she witnessed a boundless enthusiasm and passion.

"And I too see those same values shine through as it has done for 21 years now, The Diana Award carries her legacy forward by putting young people at the c entre of our future – and this has never been more important."

Harry's nod to William comes as royal expert Duncan Larcombe revealed to OK! the brothers will meet face to face ahead of their late mother Princess Diana's statue unveiling.

Discussing their relationship, Duncan said: “It's highly likely that William and Harry will meet in private before the statue unveiling.

"Royals never attend an official engagement by turning up out of the blue and Harry and William will both know that all eyes will be on them.

"They will want to try to put on a united front. They will have plenty of time on the morning of Thursday so I think it's likely they'll have breakfast and try and smooth things over. At least get to a point where they can stand to be together."

Ariana Grande giving away $1M worth of therapy to fans