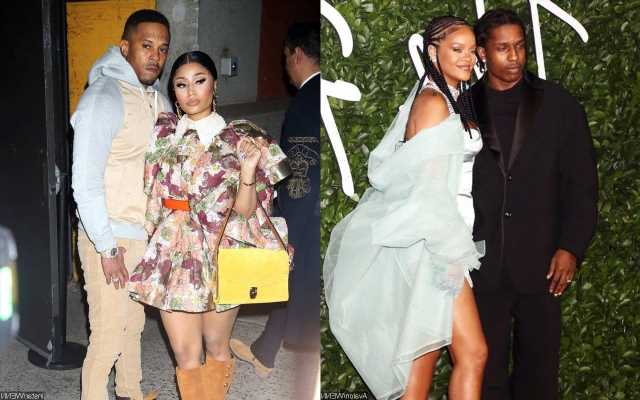 Aside from sharing a picture of the reunion, the ‘Anaconda’ raptress posts a video of her and the ‘Take a Bow’ hitmaker blowing kisses and fixing their hair.

AceShowbiz -Caribbean stars Rihanna and Nicki Minaj have reunited. While enjoying a double date, the “Anaconda” femcee and the “Take a Bow” hitmaker cozied up to their respective partners, A$AP Rocky and Kenneth Petty.

Sharing a picture from the reunion was Nicki on her Instagram page. In the Monday, September 6 post, she was seen holding her 11-month-old son Papa Bear as her husband sweetly held her arm. Rihanna, meanwhile, smiled for the camera as she leaned into her rapper boyfriend, who had his arm wrapped around her.

Nicki went on to treat fans to a video of her and Rihanna blowing kisses and fixing their hair. “Caribbean things, you know what I’m sayin’?” the Fenty Beauty founder asked her pal, before revealing that people of Barbados and Trinidad and Tobago, where the girls are individually from, historically don’t get along.

“You know Bajans don’t like Trinis?” Rihanna asked, to which Nicki audibly gasped. The “Umbrella” singer went on to divulge, “And Trinis don’t like Bajans. They draw a line in the ocean over flying fish.”

Fans have since gushed over the reunion. One in particular exclaimed, “OMG I’VE MISSED THIS SO MUCH!! QUEENS!!!!!!” Another cried out, “YALL LOOK SO CUTE LET ME CRY OMG OMG.” A third added, “LEGIT SCREAMING I BELIEVE IN RIHNIKA SUPREMACYYYYY.”

It was unclear when the occasion took place. However, Nicki posted videos of herself, Kenneth and their baby boy in the same outfits three days earlier. One of the clips captured the moment when Papa Bear spoke for the first time.

Nicki and Rihanna previously collaborated on the 2011 track “Fly” from the former’s hit album “Pink Friday”. Speaking about their collaboration, Nicki wrote on Facebook, “I wanted to work with Rihanna for a long time. I’m very proud of her accomplishments; especially since she was born on an island like me.”

“This song is a female empowerment song. But then again, it’s not specific to just women. It speaks about flying, soaring high in the face of every single solitary adversity that comes your way,” she added. “I speak about how the media has attempted to box me in and how that has made me feel suffocated.”

Michael Jackson: 1 of Madonna's Songs Was Meant for His Album 'Bad'
Recent Posts