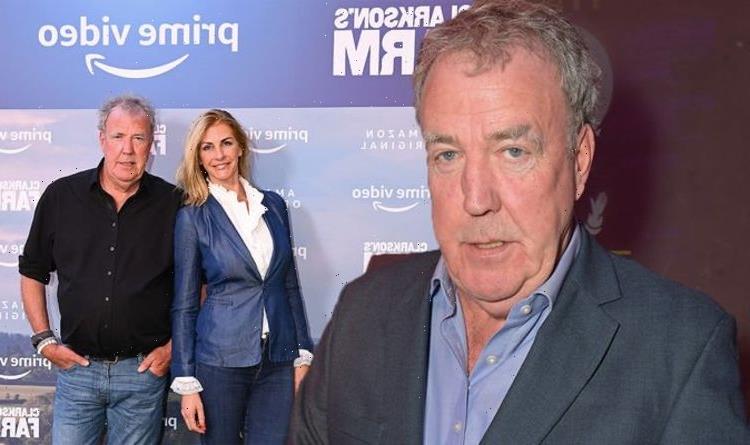 Former Top Gear presenter Jeremy Clarkson gave some insight into his year spent on Diddly Squat farm today, ahead of his new book on the subject which will be released on Thursday. The motor enthusiast talked about one “wine-powered idea” he had in the summer time, which his girlfriend Lisa Hogan, 48, was not too thrilled about.

Jeremy, 61, decided to grow his own vegetables during lockdown, as he thought it was a good idea in light of people not being able to buy from abroad “or even Kent”.

After picturing himself as the “broad bean king of Chipping Norton”, the presenter decided to pitch the idea to his land agent, who informed him it was ill-advised given the poor quality of the soil at Diddly Squat.

In the end, Jeremy settled on growing vegetables in a nearby field usually used for spring barley, deciding that the crop needed to make beer would not be necessary given that all the pubs were shut down due to COVID-19.

After reckoning that an old-fashioned machine he had bought was “useless”, the star resolved to do the work by hand.

However, as Jeremy went on to explain, most of the manual labour was carried out by his partner.

“So my girlfriend Lisa and I did it by hand,” he wrote.

“By which I mean Lisa did it by hand. Lisa was thrilled.

“I know this because she rolled her eyes, slammed the door and went for a long walk on her own to celebrate,” he wrote in an extract of Diddly Squat: A Year on the Farm, published by The Sun.

In 2008 Jeremy purchased a thousand-acre area of land in Oxfordshire and employed a local man to carry out all farming duties.

However, when the farmer decided to retire, it spurred on the TV personality to take it over himself and create his own show documenting the experience.

Just recently Jeremy was named Farming Champion of the Year by the National Farmers’ Union for his Amazon show Clarkson’s Farm.

The series follows the celeb as he attempts to successfully run Diddly Squat Farm, which is located in the Cotswolds, with the help of local man Kaleb Cooper.

The series turned out to be a smash hit for the motor-enthusiast, even receiving positive reviews from the likes of Environment Secretary George Eustice.

He said: “I think that Jeremy Clarkson’s programme has done a huge amount to raise the profile of agriculture and some of the challenges it faces.”

Top Gear had a large cult following back when Jeremy was at the wheel, and his new show seems to be having the same effect.

Jeremy left the popular programme on the BBC back in 2015.

After his departure, however, the show never quite achieved the same height of popularity.

Co-presenters Richard Hammond and James May also followed Jeremy on his way out of the show and later went on to star in Amazon series The Grand Tour together.

Following their departure from Top Gear, the show was taken over by new presenters including radio DJ Chris Evans, Friends star Matt LeBlanc and Take Me Out’s Paddy McGuinness.

Clarkson’s Farm, meanwhile, has been renewed for a second series, although Jeremy has told fans it won’t be coming out any time soon.

Diddly Squat: A Year on the Farm by Jeremy Clarkson can be purchased for £16.99 from Waterstones, WHSmith and other retailers.

Waterstones description: “Featuring disobedient animals, uncooperative plants and an unexpected pandemic, Diddly Squat is a rip-roaring account of the year Jeremy Clarkson decided to turn his hand to farming at his scenic Cotswolds estate.”