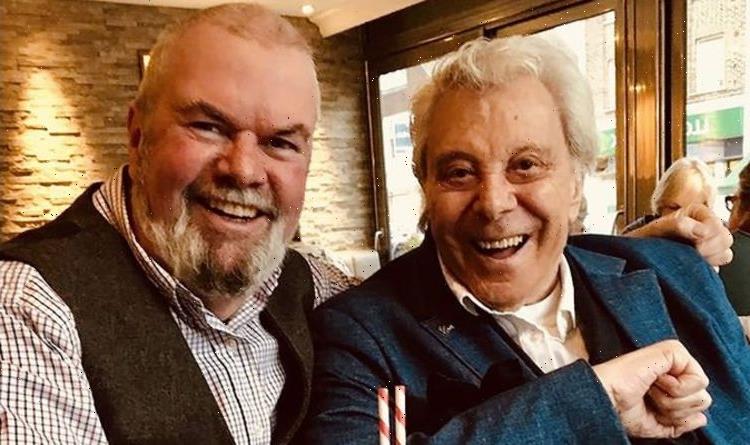 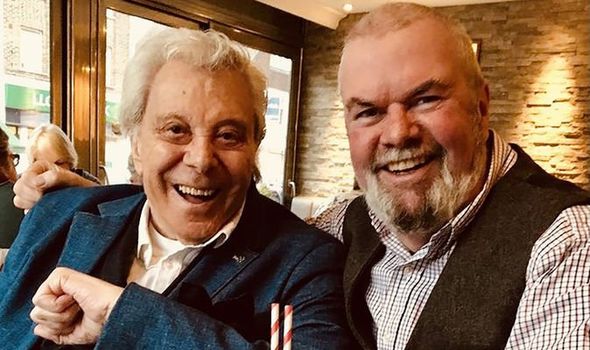 “I need to apologise to you, Garry,” he said solemnly. “The first time we met, 25 years ago, I lied about my age…don’t take it personally, I lied to everyone back then!” Lionel, who died on Thursday at 92, was about to turn 90. You don’t look it, I told him. “I don’t feel it,” he replied, the smile back on full beam. “I feel wonderful. It’s all about keeping your brain young. You don’t have to wear carpet slippers. The only thing that upsets me is my stomach.”

The veteran dancer patted his waistcoat. “This isn’t fat,” he said. “I had prostate cancer in 2006 and the radiotherapy treatment that cured me distended my stomach. I can’t complain but I wish I could lose it.”

We spoke about him wanting to work more, and how his age has made him more expensive to book. He was down, but only for a moment. Blair was an up-beat, can-do guy with enough anecdotes to fill an autobiography the size of War And Peace.

He opened his wallet and took out a silver dollar. “Turn it over,” he beamed. Inscribed on the reverse of the coin were the words: “To Lionel. Because I Dig You. Sammy Davis Jnr.”

Britain’s Mr Showbiz had worked with entertainment giants. He tap-danced with Sammy on the Royal Command Performance. He performed with Peter Sellers and with the Beatles; he taught Yul Brynner how to dance, and more recently he was handcuffed to Ollie Locke on Celebrity Big Brother.

Okay, maybe not so much the last one.

“I never say no to work,” he said, sipping a Bloody Mary. “You never know where a job will lead you…”

For instance, there was the time in 1964 when a dance he created for a Mike and Bernie Winters TV show led indirectly to him appearing in the Beatles movie A Hard Day’s Night.

“I was a regular on Blackpool Night Out with my dancers and the producer asked me to invent a dance,” he recalled. “I came up with something called The Kick.

“After the programme went out, I had teachers from all over the country getting in touch asking if I could send them the steps! I had to do an exhibition at the Café de Paris. Then Brian Epstein, the Beatles’ manager got in touch and put on a national tour called The Kick with Cilla Black, Shirley Bassey and Billy J. Kramer! And through Brian I got a part playing Dick the director in A Hard Day’s Night…”

Lionel’s career began in less glamorous circumstances, during the World War II Blitz. “During air raids we used to go to Manor House underground station in north Hackney. And my sister Joyce and I used to entertain the people down there. We’d sing and dance, play the accordion. Other station managers heard about it and asked us to play their stations too. So my first ever tour was the Piccadilly Line!

“I started dancing because I loved Fred Astaire. I never had lessons. I taught myself at home tap-dancing on the lino. But I never intended to be a dancer. I wanted to be an actor. I was a boy actor. I did Shakespeare at Stratford upon Avon.

“But my Dad died when I was 15 and I became the breadwinner. And I could make more money dancing than acting so that’s what I did. It was tough but I was working…”

Lionel’s eyes went misty as he picked at his tiger prawn pasta. “When we were kids, the entertainers were giants,” he said.

“I worked with the Everly Brothers ‑ I was that lucky! And with people like Eric Sykes, Tommy Cooper and Tarby. Geniuses all of them.”

When I asked who he rates of today’s stars, though, Lionel was equally positive.

“I adore Jamie Cullum. Paloma Faith has a lovely voice. Joe Pasquale is wonderful. He’s a one-off, completely off-the-wall. There’s no other comedian like him. And he doesn’t swear.

Lionel married wife Susan, who joined us for lunch, nearly 55 years ago. “I stole her from my friend,” he confessed. “As soon as I clapped eyes on her, I said ‘That’s the girl I’m going to marry!’”

I asked her what his best qualities are. “We laugh so much,” she said. “We disagree about everything and argue a lot, but we always end up laughing.”

Their eldest son turned 53 this year.

The Blairs lived in a ranch-style bungalow not far from Epsom in Surrey. Lionel loved TV. “I’m a couch potato,” he said. “I love The Big Bang Theory. Ellen’s sitcom on ITV2 is great. Oh and Mrs Brown’s Boys.”

The secret to a long life is laughter and moderation, he said. “I drink but I’m never tipsy. I’ve never done drugs. My only guilty pleasure used to be dark chocolate…but no more.” He patted his waistcoat again wistfully.

Lionel was born Henry Lionel Ogus in 1928 in Montreal, Canada, after his Jewish parents fled the Soviet Union. Two years later they emigrated to Stamford Hill, London, where his father Myer worked as a barber.

More than forty years later, Lionel went back to Canada with the gift of pantomime. “It went down a storm,” he recalled.

In 1980, he directed a record-breaking panto at the London Palladium with Jim Davidson and Mollie Sugden which ran from December through to March.

As a pantomime performer he used to earn £15,000 a week but the strain got too much for him.

His last one was in Derby in 2004. “I was Muddles in Aladdin with Sherrie Hewson. I drove home after the Christmas Eve show, had Christmas Day off, and was up early on Boxing Day to drive back in time for the matinee. We had two shows that day. I was drained. I had to stop.”

Despite chatting for over ninety minutes, we only touched on some aspects of his extraordinary career.

His work with Kenny Everett (“Cleo Roccos used to whip me!”), his sister Joyce’s fling with Bob Monkhouse, his friendship with Lionel Bart, the time in Morocco when he ended up appearing in a movie called Maroc 7 with Leslie Phillips and Cyd Charisse in return for the film company paying his hotel bill…

All that and his name was perpetuated in rhyming slang too.

“It’s all experience,” he said with a theatrical wave of his hand.

“Life’s rich pattern. So I never regret anything. I’ve got a wonderful wife, children, grandchildren. I live in the greatest country in the world, and I’m still having a whale of a time.