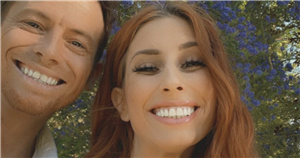 Stacey Solomon has hit out at a troll who criticised her DIY efforts at her new house, dubbed Pickle Cottage.

The mum of three moved into a £1.2 million Essex home with her partner Joe Swash and children earlier this year, and has been delighting fans with renovation updates on her Instagram ever since.

Stacey's home hacks and tips regularly delight her Instagram followers but the star has now shared one of the negative comments she has received and hit out at a troll who branded her DIY efforts “cheap.”

Sharing a screenshot of a comment that read: “That looks so cheap and tacky stacey stop with all the c***,” Stacey wrote: “Do what makes you happy! Don’t worry about what anyone else things! If you love it, go for it… Lova ya Wilma always bringing the happy vibes.” Alongside the post, Stacey shared a video in which she said: “Don’t hold back Wilma, tell me how you really feel about it. I love it, I love the purple and the flowers and the smudged paint. Do what makes you happy.”

In another post, Stacey shared a picture of her red painted toe nails and wrote: “Keep you head and your toes held high. Toes up Wilma.”

The star, 31, continued: “The best thing about you, is that you’re you. Nobody else. So don’t question yourself. If it makes you smile and doesn’t hurt anyone, do it to your hearts content. You absolutely deserve nothing less than happiness. Love you all to the moon and back.” Stacey’s update came after she shared shots of the interior of her conservatory painted purple and featuring flower installations.

The Loose Women panellist, who recently admitted that she would be devastated if she and fiancé Joe Swash split, filmed a time-lapse of her DIY project that involved painting the walls of the conservatory in a gorgeous Parma Violet-inspired hue before she added cladding. Mum of three Stacey squeezed glue onto the back of softwood timber panels, priced at £12.50 for a pack of five, and stuck them onto the wall to create a traditional dado rail around the edge of the conservatory.

The Tap to Tidy author revealed how the pine cladding “was so rough to paint” and urged her 4.4 million Instagram followers to select the “pre-primed one” to make the DIY task easier. Stacey gave the pine panels a lick of crisp white paint before also coating the light switches in the same hue.

In true Stacey style, she revealed a before and after picture to her story for the ultimate “tap to tidy”.

Captioning the blank white walls, she penned: “The sun in these pictures makes it look like a look a cool white marble wall but it was just plain white.”

When is the next episode of Our Yorkshire Farm?

Frank Gardner: BBC journalist says ‘I’d be a rotten spy – I like telling stories too much’
Recent Posts