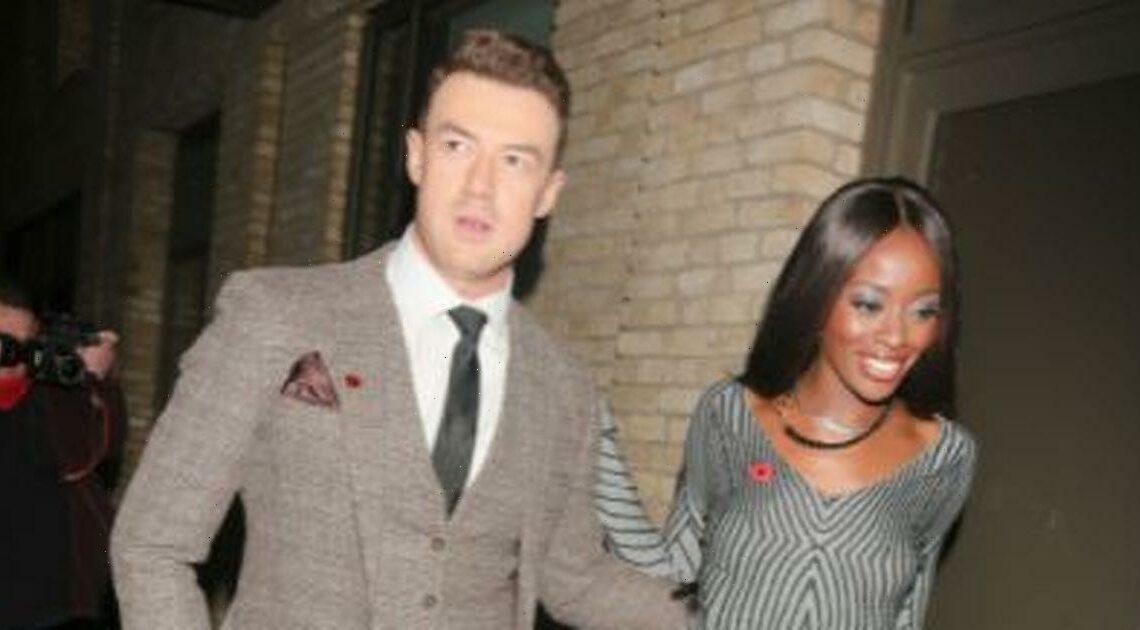 In recent weeks, the television presenter and her professional dance partner have sent the rumour mill spinning about a potential romance, with the pair even being grilled by Rylan Clark following their Argentine Tango.

And the duo did little to dispel the speculation as they exited the It Takes Two studios together, with AJ unable to wipe the smile from her face.

AJ looked incredible in a slinky grey lined dress that plunged down the middle and featured a thigh-high split.

The beauty featured sleek locks that framed her striking features, which were enhanced with a sultry coat of make-up.

AJ added a pair of towering silver high heels to her look as she strutted along with Kai, who had his arm placed around her back.

Kai looked dapper in a stylish three-piece suit that he teamed with a black tie and pocket square.

He looked naturally at ease with his dance partner as they smiled while walking off together.

It comes after the duo sparked romance rumours over the past few weeks due to their sizzling chemistry on the show.

AJ has previously admitted to having trust issues after being cheated on by three ex-boyfriends in the past.

And only recently, pals told new! that Kai could be the one to change that.

The source said: "AJ has been open about her relationship history. She does find it hard to trust after previous partners cheated on her.

"But Kai is a really nice guy. He's helping her get over any previous issues. So far, he's ticking all of the boxes."

The source continued: "It's early days, but they definitely make a good couple.

"They have a really special bond. It's not like either of them had partners already, so they're not doing any harm."

AJ and Kai have wowed viewers with their on-screen chemistry, but allegedly it continues off the dance floor too.

"Out of all of the contestants, AJ is probably the busiest work-wise. But she and Kai have just really hit it off," continued the source.

"They're spending every minute together. Even when they're not rehearsing, they're together. They can't be pulled apart. They have something really special."

It comes after TV presenter AJ discussed her relationship history while taking part in the first series of Celebrity SAS: Who Dares Wins in 2019.

"Three ex-boyfriends have cheated on me… one of them was sleeping with my best friend," she revealed at the time.