Home » Celebrities » 'The Office': Jenna Fischer and Angela Kinsey Hatched a Plan to Meet Meryl Streep and It (Sort of) Worked 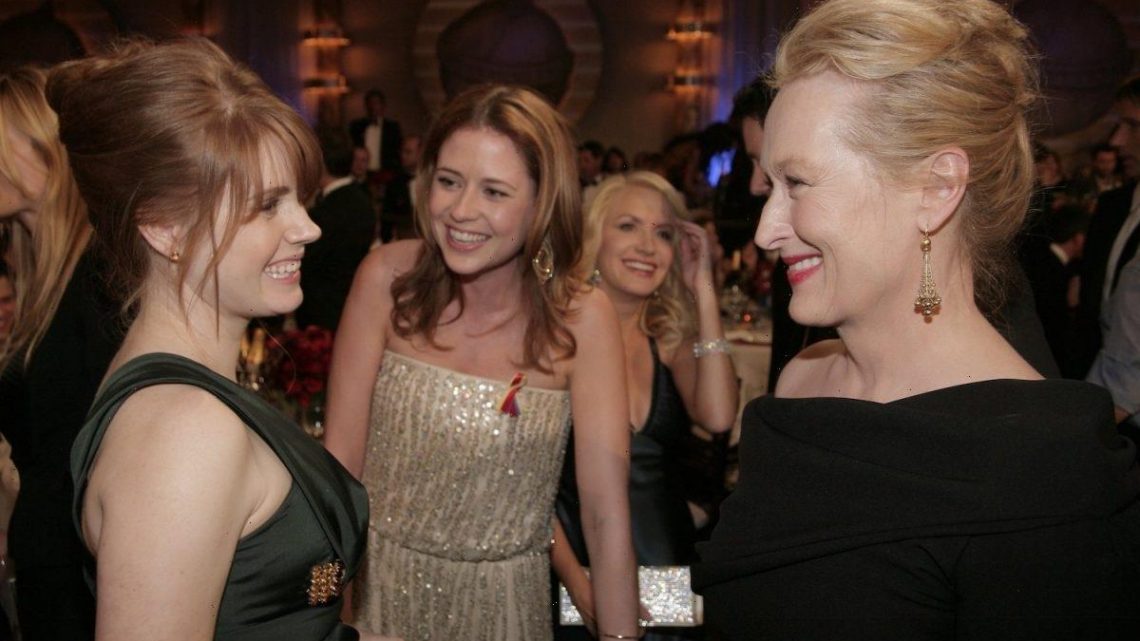 'The Office': Jenna Fischer and Angela Kinsey Hatched a Plan to Meet Meryl Streep and It (Sort of) Worked

The Office‘s Jenna Fischer knew she had an amazing opportunity to meet Meryl Streep at an awards ceremony and didn’t want to pass up the chance. When Fischer saw a former The Office guest star chatting up Streep, she recruited her co-star, Angela Kinsey, and the two crafted a pretty shaky plan.

The cast of ‘The Office’ went to the Golden Globes

During a 2019 episode of the Office Ladies podcast, Fischer and Kinsey shared the story of how they attended the 2010 Golden Globe awards because The Office was nominated.

Kinsey noted that they aren’t typically “fancy people,” so the event was a big deal for them. Their table was far from the stage, but they shared how exciting it was to be in the same room with big stars, including Angelina Jolie.

“I remember going to the bathroom and Angelina Jolie passed by,” Fischer recalled. “She took my breath away … I mean, that is a movie star.”

Fischer shared that she felt compelled to “meet the fancy people” because her mom would want her to take advantage of the special moment. “Like, this is my only chance to hob knob,” she noted. “Meet whoever I’ve always wanted to meet, I guess.”

That’s easy in theory, but in reality, she said, it’s hard to just strike up a conversation. She spotted an “in,” however when she saw Amy Adams, who guest-starred on The Office, talking to Streep.

Neither of them had spoken to anyone that evening, but Fischer decided to take charge. “So Jenna’s like, ‘There’s Amy Adams and Angela, she’s talking to Meryl Streep,’” Kinsey recalled her co-star saying.

Fischer explained that having worked with Adams she felt like they could approach the two women. “We know Amy Adams. We can go talk to Amy Adams. We know her. She likes us,” Fischer said. “We’ll just basically glom on to Amy Adams was our plan.”

Kinsey said that Fischer tried to convince her to approach Adams and Streep but she was hesitant. “I pull you from the table. I said, ‘We are meeting Meryl Streep, we are doing this. This is a story for my mother. Come on,’” Fischer told Kinsey.

Since they couldn’t figure out what to say, Fischer’s plan was straight out of a movie. “So I was like, here’s my plan. We are just going to walk up to them laughing.” Fischer said.

Kinsey was floored by the suggestion but Fischer ran with it.

“I don’t know what I thought, Angela,” Fischer admitted. “I don’t know. I just knew we had to seize the moment. So we did.”

There’s a photo that proved it happened

Kinsey shared that she was in shock as her co-star “committed” to the plan. Her confidence wasn’t quite at the same level as Fischer’s, however.

“And we did just that,” Fischer explained. “We walked up to Meryl Streep and Amy Adams laughing. And right at that moment, a house photographer came by and snapped our photo.”

“So we have a photo of us and it looks like we are having a hilarious conversation with Meryl Streep and Amy Adams,” she added.

Fischer got to briefly speak to the iconic actor. “I did get to say to Meryl Streep, ‘It’s such a pleasure to meet you. I’m a big admirer of your work.’ … That was a big moment for me,” she explained.