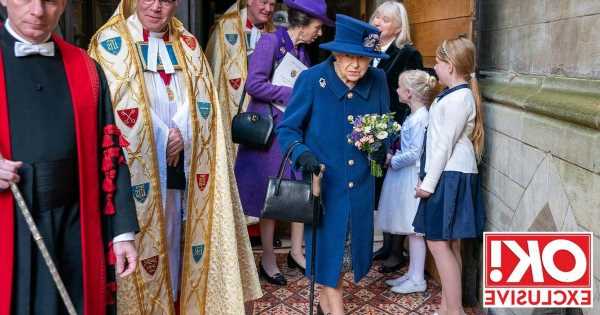 The Queen was pictured using a walking stick for the first time since 2003 on Tuesday, but a royal expert insists it is not a sign she'll be slowing down.

The 95 year old used the stick as she attended a thanksgiving service to mark the Royal British Legion centenary alongside her daughter Princess Anne, 71, at Westminster Abbey.

But royal expert Duncan Larcombe has now debunked any idea that it's a sign of weakness from the monarch following the death of her husband, Prince Philip, in April.

Speaking exclusively to OK!, he said: "We've seen The Queen come back from Balmoral and the only visible sign that she might be slowing down a bit is the walking stick.

"For many years, people speculated that when Philip were to pass on, The Queen would slow down, prepare for passing on to Charles and scale back what she did.

"I don't think the walking stick's a sign the end is nigh because you just have to look at what she's got in her diary and all that she's done in the past couple of weeks."

He continued: "Next month she'll be involved in COP26 and all eyes will be on Scotland and The Queen will play centre stage.

"That's a statement of intent from her and, yes, she's using a walking stick to support her but I think most people will wonder why she hasn't been doing that for 20 years given how busy she is and how much time she spends on her feet."

Duncan also believes The Queen's public appearances are a signal that she's not taking after her great-great grandmother Queen Victoria.

"When Prince Albert died, Queen Victoria became a recluse. She wore black every time she went out and spent the remainder of her reign trying to build memorials to her late husband rather than appear in public.

"The Queen has sent us a signal since she's got back from Balmoral and that signal is 'I'm no Queen Victoria', and maybe the stick plays into that."

It was said by the palace following her appearance that The Queen was using the walking stick "for comfort".

ITV's royal editor Chris Ship tweeted on Tuesday: "The Queen seen with a walking stick as 95 year old monarch arrives for a service at @wabbey to mark the centenary of the @PoppyLegion.

"She has used a stick before, after an operation. We are told she used one today 'for comfort'."

For the latest updates on The Queen and the Royal family, sign up to OK!'s daily newsletter.