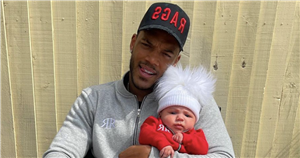 Theo Campbell has spoken out about being a father for the first time since his baby boy Aries' arrival in February.

The 29 year old, who surprised fans with the news after keeping it a secret for months, opened up on the shock of finding himself in the new role of being a dad as he spoke to Bobby Norris and Brooke Odun on Access All Areas, FUBAR Radio.

Love Island star Theo explained that he "wasn't expecting it at first" and originally planned on waiting until he was in his mid-30s to start a family.

The reality star's newborn lives in Wales with his influencer mum Sapphire Yhnell and Theo travels every Sunday to spend the first half of the week with his little boy before coming back up to London to run his tattoo shop.

“My baby, he lives in Wales and I live in London. So on Sunday’s I have to travel 130 miles, about two hours," he said, before adding: “I don’t have a life! I’m always getting invited places. My life now, like today, there’s always something on the cusp. I’m there [his tattoo shop] all the time, I do Wednesday to Sunday.”

The TV personality went on to discuss how he and Sapphire, who is also mum to five year old son Tai from a previous relationship, managed to keep her identity as well as the pregnancy hidden from the public.

Theo said they found out about the sex of the baby and told his nearest and dearest about the pregnancy "maybe a month after that".

He continued: "We went in to see what the sex was, and we were like, ‘It's been this long now, might as well keep it a little secret’.

"Because I feel like, I don't get to keep any secrets in my life. You know, everything I've ever done, well not ever done, but most things I do and stuff people know about it and that. So when it comes to big stuff…"

When asked what it was like to have a baby in lockdown amid the Covid-19 pandemic, Theo explained that he was able to spend quality time with Aries for 10 weeks before going back to work.

"So obviously having a baby in lockdown, I didn’t have to be there [the tattoo shop]. So I got the first 10 weeks, spending every day with the baby. So that was a good thing about it," he said.

Before ending the chat, the new dad gushed over his little boy as he said he loves the "little things" like making his baby laugh or watching him play.

He added: "It's like making them laugh, yeah. Like little things like, you know, waking up in the morning and he's there like staring at you, waiting for you to wake up, making little noises, trying to wriggle about.

"Little sweet things like that, little thing I’ve never even thought about before.”