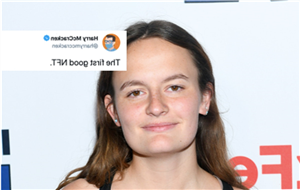 If you remember the "Disaster Girl" meme, get ready to cheer on the woman behind the iconic pic. Zoë Roth, the face of the infamous meme of a girl smirking in front of a house on fire, is now a 21-year-old college student who decided to capitalize off her internet-breaking meme. Roth managed to sell the meme for quite the pretty penny, and she’s planning to donate some of the money to charity. Twitter users are so happy to see it, and these tweets about "Disaster Girl" and her $500,000 NFT are all celebrating the sale.

The Disaster Girl meme stems back to one fateful morning in 2005 when Roth was four years old. According to The New York Times, Roth’s family took her to look at a controlled house fire in their neighborhood in Mebane, North Carolina. It was overseen by firefighters and some kids even got to use the firehose on it. Eventually, her dad, Dave Roth, asked her to smile for the camera as she posed in front of the fire, and the rest was history. The meme surfaced sometime in 2007 after her dad entered the snapshot in a photo contest with JPEG Magazine and won.

Odds are you’ve seen Disaster Girl’s smirk overseeing various tragedies in memes like the Titanic sinking, standing in front of a monstrous creature, and yes, even with Teletubbies. According to the internet meme database KnowYourMeme, Disaster Girl increased in popularity in 2008, after it was published in JPEG Magazine’s February/March issue that year.

On Saturday, April 17, Roth sold her meme as a non-fungible token (NFT) — which is a digital asset that uses blockchain, the same technology behind cryptocurrency. Roth’s auction sale to @3FMusic got her 180 in Ether cryptocurrency. The value of crypto varies like other investment shares, but as of Friday, April 30, her sale is valued at more than $495,000.

Roth told The New York Times that she plans to use the money to pay off her student loan debt and donate some of it to charity.

Fans are definitely feeling proud of Roth for making nearly $500,000 off of her much-loved meme.

Some people are shocked she made so much off the meme, while others think it’s a fair price:

Fans can’t get enough of her successful sale and are happy she’s finally getting paid for the iconic meme.