Cara Delevingne is an iconique supermodel and actor (who, side note, doesn’t have expensive taste), so obviously, yes: A lot of people want to spend time with her. Cara is friends with literally every celebrity ever and has also dated—both publicly and privately—several A-listers. As she once told Elle UK, “I’m just better when I’m in love. That doesn’t have to mean with someone. It can also mean with myself. It just feels incredible when you’re not alone, when you’re facing the world with someone else.”

Okay, love that for her! So without further ado, please check out this dating history timeline of Cara Delevingne’s ex-boyfriends and ex-girlfriends—et voilà!

As of this summer, Cara is ~rumored~ to be dating Leah Mason, AKA singer Minke. Per The Daily Mail, the two were seen sharing a v passionate kiss while on vacation in Portofino.

While not much more intel is currently available about their relationship, one thing’s for sure: these two look v enamored and I, for one, am here for it! 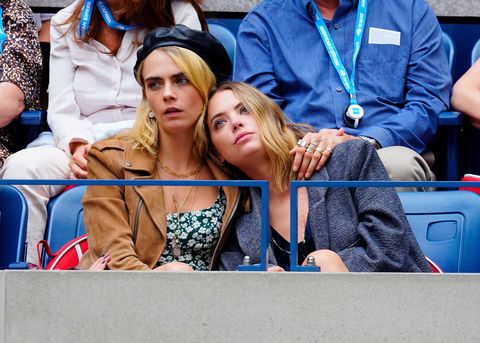 Ashley is probably Cara’s most long-term relationship, and they dated for about two years. These two were first spotted together in August 2018 (photographed kissing at an airport—cuuute) and then went public with their ’ship on Instagram the following summer:

Ashley and Cara sadly broke up in 2020, with a source telling People they, “Always had their ups and downs before, but it’s over now. Their relationship just ran its course.”

Cara also opened up to Cosmopolitan (hi) about what it was like to go through a breakup in the early days of the pandemic, saying it, “Made me deal with it more, which was harder…or better. I don’t know. Everything is magnified in a pandemic.” 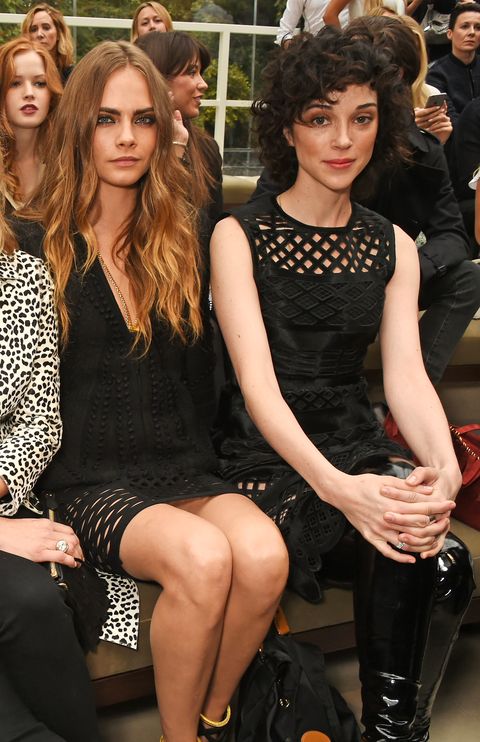 Cara and singer St. Vincent were super serious for about 18 months, and Cara even talked about their relationship to Vogue, saying, “I’m completely in love.…Before, I didn’t know what love was—real love. I didn’t understand the depth of it. I always used to think it was you against the world. Now I know the meaning of life is love. Whether that’s for yourself or for the world or your partner.”

The pair broke up shortly after that interview dropped, and then in 2017, St. Vincent spoke to Vogue about their friendship, saying, “We’ll always be really close. I’ll love her forever. I fell in love with this very famous person. It’s not anything I was in any way ashamed of, so I wouldn’t have hidden it.”

Cara and Jack dated in late 2014, with a source confirming the relationship to E! News with the simple statement: “They’re having fun.” Got it! Cara also seemingly confirmed their status on Instagram, posting a picture of all the “love bites” she’d given him, as ya do. 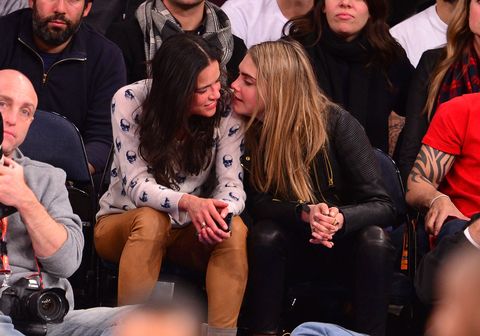 Michelle and Cara dated in early 2014, and Michelle confirmed their relationship by saying, “It’s going really well. She’s so cool. When we started hanging out, I just thought she was awesome, and we have the best time together. She’s hard though. You wouldn’t want to mess with her in a fight.”

They broke up after just a few months, with a source saying, “Michelle isn’t as interested in being in the limelight. She thinks they have different priorities.” 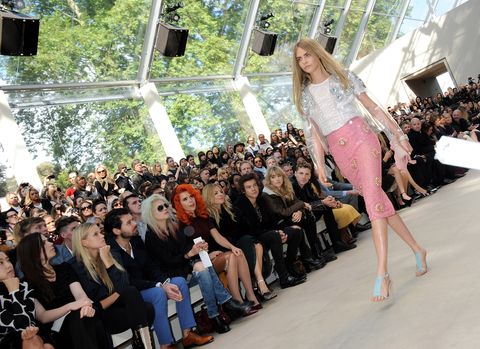 Harry and Cara were said to be dating in September 2013, when a source told E! News, “Harry’s been chasing Cara nonstop. He really likes her and has been saying that he wants to be exclusive with her.” It doesn’t look like they were together long—although Harry did watch Cara walk the Burberry show. ^^^ 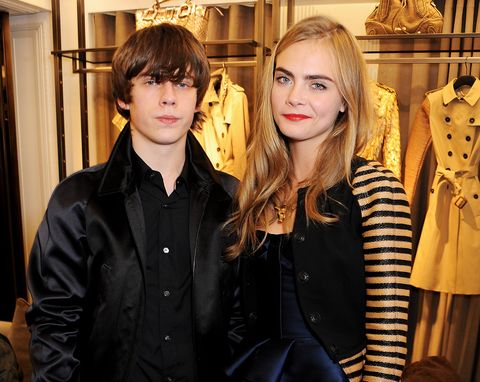 Back in 2013, The Daily Mail reported that Cara was dating teenage pop sensation Jake Bugg, whom she “hit it off straight away” with after meeting through mutual friend Rita Ora. But it looks like they weren’t meant to last, splitting just a few months after this news dropped.

“Jake is very upset. Cara is a great catch and lots of fun. She definitely won’t have any trouble finding a replacement for him,” a source said at the time. “Cara’s career is going so well so perhaps she’s erring on the side of caution and concentrating on that. She weighed things up, and with Jake’s career taking off too, they didn’t get to see a huge amount of one another anyway.”