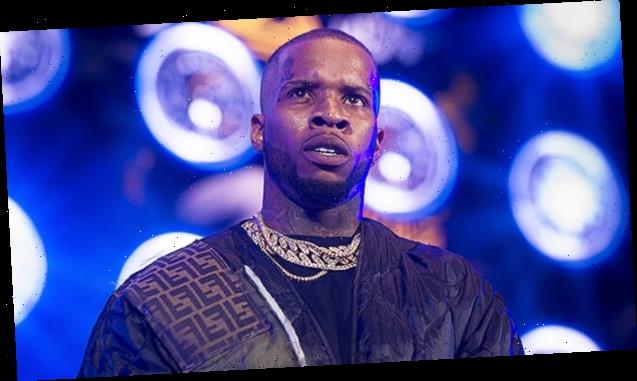 Torey Lanez is looking at some serious prison time, as he has now officially been charged with assaulting a ‘female friend’ in connection with his allegedly shooting Megan Thee Stallion.

Without naming Megan Thee Stallion as the victim, the Los Angeles District Attorney’s office has charged rapper Torey Lanez with assaulting a “female friend.” D.A. Jackie Lacey’s office announced on Oct. 8 that “The rap artist known as Tory Lanez has been charged with assaulting a female friend in the Hollywood Hills earlier this year,” which points to the pool party the pair attended on July 12, 2020 where the shooting took place. HollywoodLife.com has reached out to both Tory and Megan’s reps for comment.

Tory — who’s real name is Daystar Peterson — was “charged with one felony count each of assault with a semiautomatic firearm – personal use of a firearm – and carrying a loaded, unregistered firearm in a vehicle. The defendant also faces a gun allegation and that he personally inflicted great bodily injury.” He’s scheduled to be arraigned on Oct. 13 in a downtown Los Angeles courtroom. The case is being prosecuted by the DA’s Family Violence Division.

Tory is looking at some serious time behind bars if he’s convicted on all counts. He court receive a maximum sentence of 22 years and eight months in state prison. The case stems from when Tory, 28, was pulled over after speeding away from a Hollywood Hills house party where neighbors reported hearing gunshots. Once police ordered everyone out of the vehicle, Megan’s feet were bleeding. A gun was found upon searching the vehicle, and Tory was placed under arrest for carrying a concealed weapon in a vehicle, which is considered a felony. Megan was rushed to a local hospital for her wounds.

The DA’s press release matched up with accounts Megan has given in social media messages to fans about how Tory allegedly shot at her, hitting her in the feet. “On July 12, the defendant and the 24-year-old victim got into an argument while riding in an SUV in the Hollywood Hills. The victim exited the vehicle and Peterson is accused of shooting several times at her feet and wounding her,” it read. The Los Angeles Police Department’s Hollywood Division is still actively investigating the case.

Megan has showed fans the bullet wounds she suffered in the incident, after she initially told fans that “I’m real life hurt and traumatized,” in a July 17 tweet. On July 27 she took to IG live and without naming Tory, described the events of the night. She told fans, “I was shot…in both of my feet and I had to get surgery to get the sh*t taken out, to get the bullets taken out. And it was super scary.”

She then welled up with tears and fanned herself, continuing, “Oh Lord, I didn’t think I was going to cry. But yeah I had to get surgery and it was super scary. Just the worst experience of my life. And it’s not funny, there’s nothing to joke about. It was nothing for y’all to make up stories about,” Megan told fans. On Aug. 20 she came out and named Tory, revealing in an Instagram live, “Yes…Tory shot me.” She then seemingly addressed him personally and said, “You shot me. and you got your publicist and your people going to these blogs, lying and s–t…stop lying.”

The New Face of Burberry Beauty Talks Moisturizing, Modeling, and the Benefits of Self-Care
Recent Posts