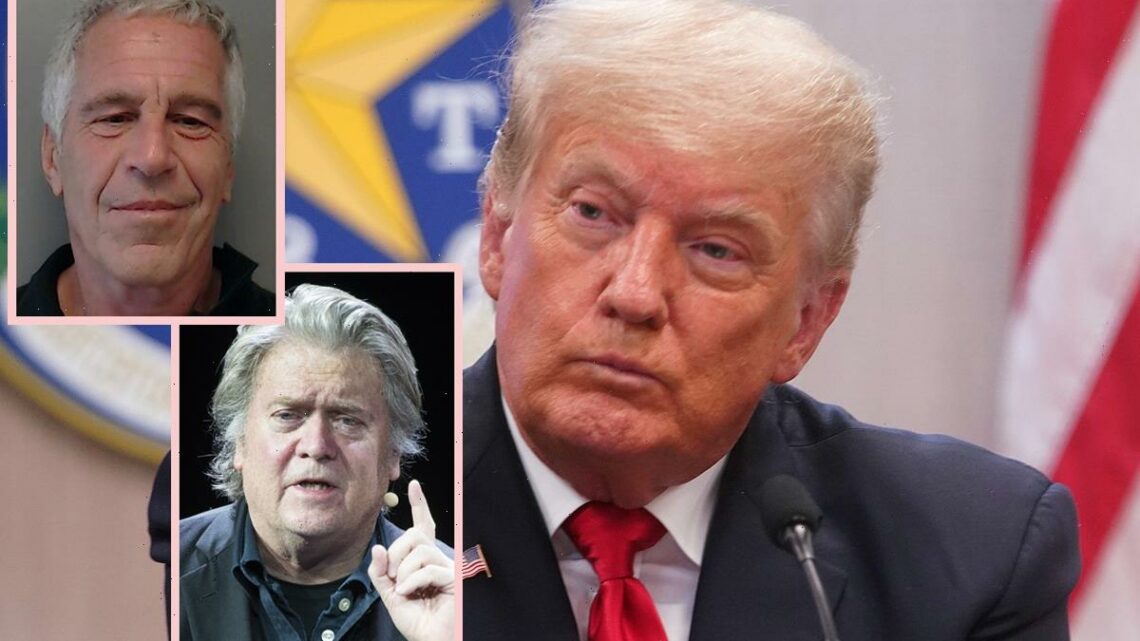 Trump Chief Strategist Steve Bannon Coached Jeffrey Epstein On How To Be 'Friendly' & 'Sympathetic' On TV!

Donald Trump has tried so hard to distance himself from his old pal Jeffrey Epstein the past couple years. Not that he has to do much — his followers are happy to live in denial about their long relationship and the accusations against the POTUS.

But there are so many connections between the two men, it’s unreal.

There’s the infamous quote about Trump and Epstein both liking beautiful women “on the younger side.” They shared lawyers. As president, Trump promoted the US attorney who gave him his sweetheart deal the first time he was on the hook for underage sex trafficking. (Secretary of Labor Alexander Acosta resigned over the scandal, but Teflon Don slipped away as usual.)

And yet his base always want to brush all of that off, say it’s in the past, and ask what about Bill Clinton as if whataboutisms somehow void their own guy’s wrongdoing.

But the connections just keep piling up. The New York Times reported on Sunday that Michael Wolff‘s upcoming book puts forth yet another recent link in the Six Degrees Of Jeffrey Epstein game.

Wolff, who was infamously (and apparently accidentally?) given WAY too much White House access before writing Fire And Fury about the Trump administration, is at it again with Too Famous: The Rich, the Powerful, the Wishful, the Notorious, the Damned.

In this latest explosive look behind the golden curtain, Wolff claims Trump strategist Steve Bannon was also working directly with Epstein. Bannon was the CEO of Trump’s presidential campaign and was named Chief Strategist and Senior Counselor to the President after the win.

Like just about everyone else working for Trump, he didn’t last long, resigning after only eight months. But just a couple years after his appointment to a cushy White House position, Bannon was, per the book, coaching Jeffrey Epstein for a 60 Minutes interview.

According to Wolff, the Breitbart alum coached the convicted sex offender in early 2019, while he was facing a new round of charges for his alleged sex trafficking ring. Wolff claims it was Bannon who encouraged him to get on TV and get ahead of the story, telling him:

A “sympathetic figure.” The guy who, we’ll remind you, the government had a slam dunk case against for recruiting and extorting underage girls, as young as 13 and 14, to sleep with rich and powerful men. Sympathetic.

Wolff also claims Bannon coached Epstein not to espouse his racist views on prime time. Good plan. That’s why they pay him the big bucks, we guess. He also allegedly told him to be sure to look into the camera and keep repeating that he wasn’t a pedophile.

It’s a pretty awful accusation, though it wouldn’t even be Bannon’s first time helping out an accused pedophile as he supported Roy Moore in Alabama in 2018. As did Trump, btw.

But you know what? It’s true!

Bannon actually confirmed the story, telling the Times he had indeed told Epstein he should go on 60 Minutes, and that he had himself recorded 15 hours of interviews with the billionaire pedophile. Whoa.

However, he characterizes it a little differently, saying he “never media-trained anyone.” Call it what you want, guy, you told him to try to win the court of public opinion with a TV interview! (BTW, Prince Andrew apparently got that same advice. Funny. Oh, and it did not work out too well for him.)

What were all the hours of interviews for if not coaching him on the story he would tell? Bannon claims he was working on a documentary about how Epstein’s “perversions and depravity toward young women were part of a life that was systematically supported, encouraged and rewarded by a global establishment that dined off his money and his influence.”

So, um, what happened to that doc? Even if the subject died, the topic is as hot as ever. You’d think he would have announced it at some point, but this is apparently the first anyone is hearing of it. And we’re more than a little curious how Bannon’s old pal Trump would be presented in such a film… especially when it’s being made by one of the men who apparently was helping these people achieve and keep power. Kind of like if Leaving Neverland was made by Quincy Jones.

Something tells us if there really were such a film in development, it would conveniently leave Trump out of it.

Look, at the end of the day, we don’t know who did what. We know the accusations we’ve heard and which ones have the ring of truth. But we can’t know for sure and can’t just find everyone guilty by association with this creep.

But the next time you want to defend Trump or Clinton or Prince Andrew, ask yourself this question: just how many ties to a pedophile are you comfortable with??