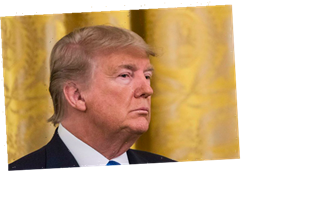 Trump discussed the coronavirus during a Wednesday call on Fox News

President Donald Trump denied Thursday that he ever advocated for sick individuals still going into work despite the national concern over the coronavirus. However, during a Wednesday night call into Fox News’ “Hannity,” he did discuss what he considered the benefits of people going to work while feeling ill.

Trump told Sean Hannity Wednesday evening that “thousands or hundreds of thousands of people” can “get better just by sitting around and even going to work. Some of ‘em go to work.”

He said, “A lot of people will have this and it’s very mild. They’ll get better very rapidly. They don’t even see a doctor. They don’t even call a doctor. You never hear about those people,” he said by way of dismissing the global death rate of 3.4% as a “false number” based on his “hunch.”

Just hours later on Thursday, the president tweeted, “I NEVER said people that are feeling sick should go to work. This is just more Fake News and disinformation put out by the Democrats, in particular MSDNC. Comcast covers the CoronaVirus situation horribly, only looking to do harm to the incredible & successful effort being made!”

Obviously, numerous people were quick to point out on Twitter — with video attached — what the president was recorded saying.

The Centers for Disease Control and Prevention broadly recommends all employees “stay home if they are sick until at least 24 hours after their fever (temperature of 100 degrees Fahrenheit or 37.8 degrees Celsius or higher) is gone.”

2020 Presidential Contenders: Who's Still Challenging Donald Trump and Who's Dropped Out (Photos)

There’s less than a year to go until the 2020 presidential election, but the competition to potentially replace Donald Trump in the White House

has begun to diminish as more Democratic candidates drop out of the race.

There’s a lot to keep track of, but we’re here to help. Here’s TheWrap’s list of everyone who is running for president so far — and who has dropped out.