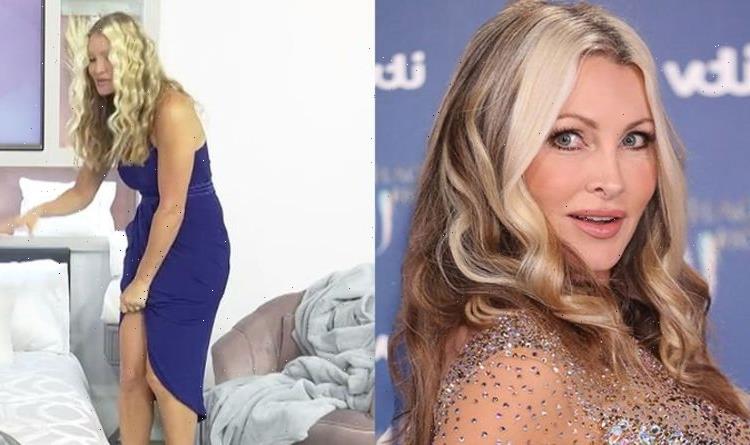 Wish Id known! Caprice struggles to contain assets in dress on live TV after it shrinks

Caprice Bourret, 49, struggled to walk while presenting her segment on shopping channel, Ideal World TV, last night, after her dress had shrunk in the wash. Trying to not reveal too much (as the dress was so tight), the presenter of the show laughed and asked the American businesswoman: “Is your dress OK?”

Caprice looked gorgeous in a blue bodycon midi dress while launching her new line of bedding, however, she discovered there was a slight issue with the glamorous number.

She shared: “I am so sorry about my dress everyone.

“Sorry! Someone washed my dress and it is now at least a size too small. I wish I had known it had shrank before packing it.”(sic)

The businesswoman has been in a relationship with her husband Ty Comfort since 2011.

The couple share two children together – Jett and Jax.

A month after deciding to use a surrogate, Caprice discovered she was pregnant – meaning she had two babies in the space of a few weeks.

The model has described Ty as the love of her life, adding: “I have a drop-dead gorgeous partner, so [I have sex] two to three times a week.”

The couple married in December 2019, just before Caprice’s Dancing On Ice debut.

Speaking on the difficulties of having two young boys, Caprice shared on Ideal World: “I have my two 8-year-old boys and you can imagine the grossness that goes on in these duvets.

“It is not normal. Oh my goodness, you have no idea what I have seen. I have to wash my boy’s bed sheets once a week!”

Talking about her own range, which is also on her kids’ beds, she then said to the camera: “Boys can do whatever you want with these duvets, within reason! Have mercy on mummies please!”

The presenter then awkwardly asked the star: “Are your boys watching?!”

Caprice got her first big break as a model when she was featured in Vogue, which then inspired her to move to the UK to look for more work in the fashion industry.

The world-renowned model was dubbed the sexiest woman by the News of the World, as well as being named Maxim’s International Woman of the Year for three years in a row.

Caprice has proven that she’s got both beauty and brains, as she currently manages a successful business.

She is the owner of By Caprice Home and has also worked in collaboration with one of the UK’s leading department stores, Debenhams.

The model has also attended numerous business events and given masterclasses on how to develop your own brand.

Caprice and Ty were part of the cast of the Bravo reality series, Ladies of London, which followed a group of women based in London and their wealthy husbands.

Over a decade ago, Caprice appeared in the third series of Celebrity Big Brother.