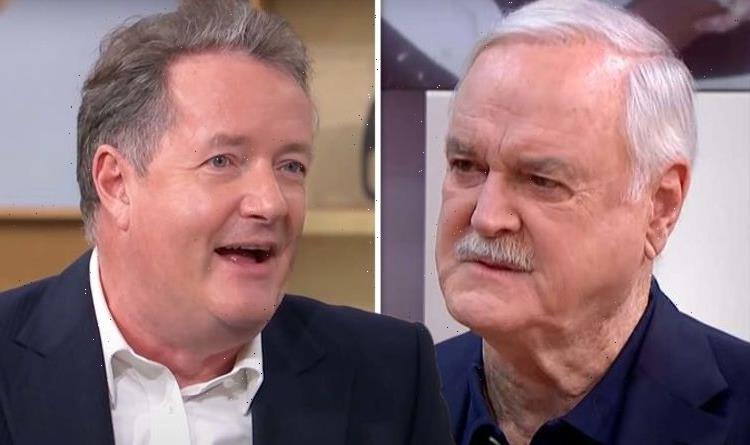 “He will probably get about £20 million, and everyone will gasp.

“But think how much more he would be getting if he had any discernible talent.”

Unhappy Piers did not hold back after seeing John’s dig and counterattacked with a brutal swipe of his own.

Piers wrote in view of his 7.9 million followers: “Awww, Merry Christmas to you too, Cleesey!

“I love how much this has annoyed you… you bitter sad old bore.”

Twitter went into overdrive following the exchange, with one user (billboardmeme) saying they would “sit back and eat popcorn” while the drama unfolds.

SomeCockney took a jab at Piers saying: “At least [John] has never ran off TV in tears.”

Charlie added: “But then, [John’s] contributed hugely to the levity of the world, while not leaching of proper ‘celebrities’ creating faux grudges against others to stay relevant.

“Also, he never stormed off his own show after an argument with a weatherman.”

Others came to Piers’ defence, such as Debra, who said: “I won’t gasp because when Piers appears, the ratings will go through the roof and then he will be worth every penny that they spend on him.

“So, tough if it upsets John Cleese, maybe a bit of Faulty Towers has rubbed off on him because he wasn’t that nice to the Spanish waiter.”(sic)

Anthony Tourlamain echoed: “I think you may be underselling Piers at only £20 million!”

Piers’ feud with the Monty Python star dates back to 2015, when the journalist claimed John had ignored him in a New York restaurant.

Writing in his Daily Mail column, the former GMB presenter said at the time: “Cleese has sadly morphed in recent years into the worst type of whining pub bore.

“Not quite at Hugh Grant and Steve Coogan levels of hideously sanctimonious tedium, but challenging hard.

“If he’s not trashing his ex-wives, he’s moaning incessantly about tabloid journalists – most of whom long since stopped caring about what he does.”

John tweeted his response at the time, saying: “Piers Morgan writes that I didn’t recognise him in a restaurant in New York. I did.

“I just didn’t want to speak to someone I truly detest.”

It comes as Piers announced he will be hosting a nightly current affairs show with News Corp and Fox News Media from 2022.

He will also be joining The Sun and the New York Post as a columnist.