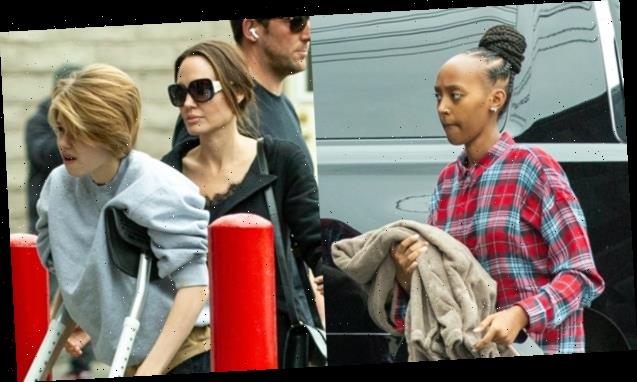 Angelina Jolie brought her daughters Zahara and Shiloh Jolie-Pitt to the movies after both girls had recent surgeries. This was the first time Zahara has been spotted in public since her hospitalization.

Angelina Jolie is frequently photographed out and about with her daughters. But since 2020 began there have been hardly any sightings of the girls. That’s because the 44-year-old actress just revealed her two eldest, Zahara, 15, and Shiloh, 13, both had recent surgeries. On March 9, they were photographed in public for the first time in several months. While Shiloh is walking with crutches due to a hip surgery, Zahara looked healthy as she headed to the movies with her sister and mom. The nature of her surgery hasn’t been disclosed.

Zahara wore a red plaid shirt-dress and had her long, braided hair up in a bun as the group exited a black SUV. She wore comfy white sneakers on her feet and held on to her cell phone. It looks like Z knows just how cold movie theaters can be. Since she had bare legs, she carried a tan blanket along with her.

Maybe she planned on sharing the blanket with sister Shiloh, as she too had bare legs. The teen wore black shorts and a grey sweatshirt as she walked with her crutches, while Angelina could be seen in a black dress behind her. Shiloh was photographed out earlier in the day with youngest sister Vivienne, 11, buying flowers along with their mom. It was the first time Shiloh had been seen since Angelina revealed in a March 8 essay for Time magazine on International Women’s Day that girls had undergone surgeries. The trip to the movies was the first public sighting of Zahara.

Angelina noted that she was writing the essay from a hospital room. “I have spent the last two months in and out of surgeries with my eldest daughter, and days ago watched her younger sister go under the knife for a hip surgery,” she wrote. “They know that I am writing this, because I respect their privacy and we discussed it together and they encouraged me to write. They understand that going through medical challenges and fighting to survive and heal is something to be proud of.”

“I have watched my daughters care for one another. My youngest daughter studied the nurses with her sister, and then assisted the next time. I saw how all my girls so easily stopped everything and put each other first, and felt the joy of being of service to those they love.” Angelina continued. She added, “Their brothers were there for them, supportive and sweet. But on this International Women’s Day, writing from the hospital, I find myself focusing on my daughters for a moment, and all that I have learned from them and other young girls I have met around the world.”