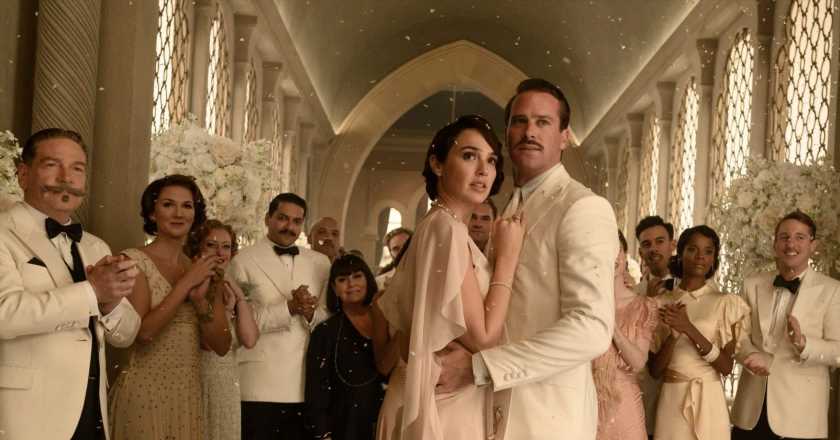 Can’t wait for Kenneth Branagh’s star-studded adaptation of Death On The Nile to hit cinemas? Quench your thirst for mystery with one of the many Agatha Christie film and TV adaptations streaming now.

2021 marks 101 years since the publication of Agatha Christie’s first novel, The Mysterious Affair At Styles. As in, yes, the very same book that introduced Hercule Poirot to the world.

Of course, the celebrated author went on to pen another 65 detective novels, 14 short story collections, six romances, and the world’s longest-running play, The Mousetrap. And she’s still as relevant as ever, with Kenneth Branagh’s star-studded adaptation of Death On The Nile expected to hit cinemas on 11 February 2022 (Covid depending).

And so, to celebrate #101YearsOfChristie, we’ve compiled a list of all the brilliant Christie adaptations that are currently streaming on BritBox, Apple TV, Amazon Prime, and YouTube (sadly, Netflix is lacking in the Christie department at the moment).

All that’s left for you to do, then, is pour yourself a mug of hot chocolate, draw the curtains tight, and settle down to binge some of the Queen of Crime’s most timeless stories.

Crooked House – one of Christie’s personal favourites – takes us back to the glamour of the late 1940s, and is every bit as twisty and gripping as you’d expect one from the crime novelist to be.

Sophia de Haviland (Stefanie Martini) is a smart and successful woman, who spent the war working for the Foreign Office. During her time there, she became engaged to be married to the delectable Charles Hayward (Max Irons) – and, now that WW2 is over, they intend to finally tie the knot.

Too bad, then, that her grandfather has been murdered – in, naturally, one of the strangest and most inventive ways that Christie could dream up. And, with plenty of people (Glenn Close, Christina Hendricks, and Gillian Anderson and among those who make up the star-studded list of suspects) staying in the house at the time of the slaying, the whodunit doesn’t look like it’ll be solved easily.

Netflix in October 2020: the best new films and TV shows coming this autumn

Thankfully Priscilla: Queen Of The Desert’s Terence Stamp is on hand to take on the bulk of the detective work as Chief Inspector Taverner.

But will he be able to sniff out the murderer before they strike again?

Miss Jane Marple, whether being played by Geraldine McEwan or Julia McKenzie, is one of the best known of Christie’s characters. On the surface, she’s a kindly octogenarian living a very conventional life in a little country village. And yet… well, and yet she spends all her time solving mysterious and dangerous crimes and murders, proving an absolute boon to local police.

If you haven’t been introduced to Marple yet, then why not dive in via ITV’s series? It’s impossibly cosy and addictive, all at once.

Agatha Christie’s Marple is available to stream on BritBox.

Witness For The Prosecution (1958)

With a 100% ‘fresh’ rating on Rotten Tomatoes, this is an absolute must-watch for Christie fans everywhere.

In this twisted tale, the affable Leonard Vole (Tyrone Power) is being tried for the murder of a wealthy woman, and legendary lawyer Sir Wilfrid Robarts (Charles Laughton) has chosen to represent him.

Unfortunately, Leonard’s alibi depends on the testimony of his callous wife, Christine (Marlene Dietrich), who, after the discovery of a legal loophole, makes the shocking decision to appear in court against him.

As seasoned Christie fans will no doubt have guessed, though, this is only the first in a series of puzzling revelations and reversals.

Witness For The Prosecution is available to buy or rent via YouTube.

Romantic books: 29 holiday reads that are perfect company for the beach

Of course, if you’re looking for the first film adaptation to feature Christie’s famous Miss Marple, then check out this movie about the amateur consulting detective.

An adaptation of 4.50 From Paddington, the much-loved comedy film sees Margaret Rutherford’s Marple take on the case of a strangled woman, much to the chagrin of the local authorities.

It’s worth noting that this film lacks much of Christie’s trademark suspense and underlying darkness, instead favouring comedy and whimsy, but trust us when we say that it’s still a fun film to get stuck into.

Murder, She Said is available to rent on Amazon Prime Video.

Sarah Phelps’ miniseries is regarded by many as one of the best Christie adaptations of all time, and for good reason. Eight strangers are invited to a tiny island off the coast of Devon. They settle in, unpack their toothbrushes, and eventually sit down to dinner, their hosts mysteriously absent.

It is then, and only then, that the true nature of the party is revealed. Dark secrets are revealed, lives are cut short, and a race against time begins as the terrified guests work together in a bid to weed out the killer among them.

With an all-star cast (think Miranda Richardson, Charles Dance, and Aidan Turner, to name just three), this “unsolvable mystery” is infinitely watchable.Trust us.

And Then There Were None is available to rent on Amazon Prime Video.

32 brilliant and thrilling detective dramas to get stuck into

Another adaptation of And Then There Were None, this Bollywood thriller sees a luxury vacation turn deadly when a group of young adults find themselves stranded on a deserted island and seek refuge in a mansion with a sinister butler.

Gumnaam is available to stream now on Amazon Prime Video.

And how about one more adaptation of And Then There Were None, just for good measure?

In this loose reimagining of the tale, a vicious storm breaks out in the Nevada desert, prompting 10 people to seek refuge in an isolated motel. Too bad, then, that a serial killer (Pruitt Taylor Vince) under the care of psychiatrist Doctor Mallick (Alfred Molina) has checked in, too…

Identity is available to rent on Amazon Prime Video.

With an all-star cast directed by Kenneth Branagh, and a moustache to end all moustaches, this adaptation of Christie’s classic Poirot tale is impossibly fun and lavish.

You probably know the story already: a murder takes place on a train journey, a detective decides to investigate and find the culprit amongst the passengers aboard. Your standard Poirot fare, quite frankly.

In the process, though, Poirot uncovers a number of secrets and, in the process, also learns the true identity of the victim himself.

Murder On The Orient Express is available to rent on Amazon Prime Video.

Netflix’s most important true crime documentaries, from Athlete A to The Family Next Door

Another Marple adaptation, this one sees Angela Lansbury step into the legendary detective’s well-heeled shoes.

Boasting the collected acting talents of Elizabeth Taylor, Rock Hudson, Geraldine Chaplin, Tony Curtis, Kim Novak, and more, this film deals with the rivalry between two famous movie stars, Marina Rudd and Lola Brewster, a shock case of poisoning, a stream of anonymous death hearts, and the sort of twisty-turny murder case that’s guaranteed to keep even the most dedicated armchair detectives guessing.

The Mirror Crack’d is available to rent now on Amazon Prime Video.

In this much-loved series, the famous Belgian detective, who has an impeccable knack for getting embroiled in a mystery, solves crimes along with Captain Hastings and Scotland Yard Chief Inspector James Japp. And, while his moustache isn’t quite as enormous as Branagh’s, it’s worth noting that Christie’s grandson has piled praise upon Suchet’s portrayal of Poirot.

“I think that visually he is much the most convincing and perhaps he manages to convey to the viewer just enough of the irritation that we always associate with the perfectionist, to be convincing!”

Agatha Christie’s Poirot is available to stream on BritBox.

Another acclaimed adaptation from Phelps, The ABC Murders sees John Malkovich star as an older and wiser Hercule Poirot.

No longer revered, the detective has largely fallen into obscurity. However,when a series of murders begin occurring in relation to a batch of sinister anonymous letters, Poirot takes the case into his own hands and deploys his detective skills in order to find the killer before they strike again.

Baffling and brilliant, this twisted tale also boasts the talents of Rupert Grint and Andrew Buchan.

The ABC Murders is available to stream now on Amazon Prime Video via Acorn TV.

Phelps’ fifth Christie adaptation, The Pale Horse centres around the character of Mark Easterbrook, a man whose name appears on a mysterious list found inside the shoe of a dead woman.

Understandably perturbed, Easterbrook begins an investigation into how and why his name came to appear on the list, and is drawn to The Pale Horse, the home of three rumoured witches in a tiny village called Much Deeping.

People say the witches can get rid of wealthy relatives using dark arts, but as the body count rises, Easterbrook becomes more and more determined to find a logical explanation… and figure out who could possibly want him dead.

This miniseries keeps you guessing throughout (is actual magic or basic human greed to blame for the string of corpses?) and is guaranteed to get under your skin with its nasty, brutish tone.

The Pale Horse is available to stream on Apple TV.

Dear Reader, We Present You With Regé-Jean Page and Emily Brown at the GQ Awards