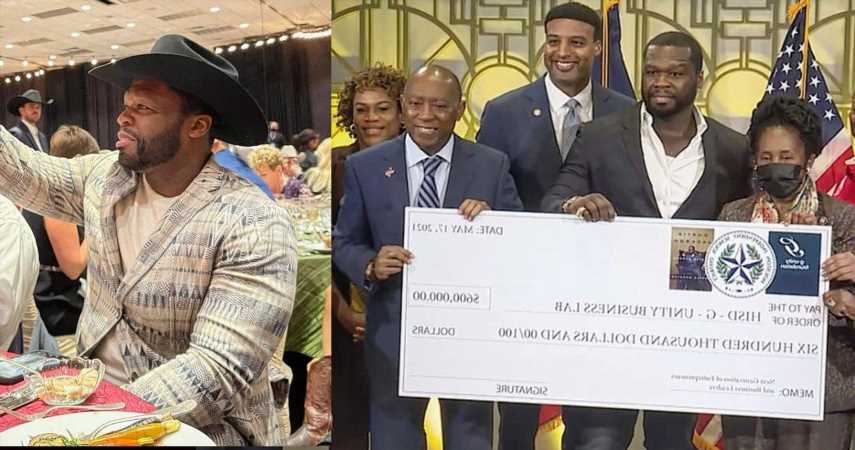 50 Cent has recently moved to Houston, Texas and has posted a series of social media images depicting just how much he is enjoying his new community. He has nothing but great things to say about Houston, and has decided to give back to the people that have so graciously accepted him with open arms. He is making it clear that he’s not just going to make waves with his music, but that he also has good intentions and he’s quickly making good on them. He just made a massive donation under his corporation, the G Unity Foundation, of $300,000. The money will go towards establishing advanced business labs in 3 HISD high schools.

50 Cent has started off his stay in Houston on the right foot. As soon as his corporation donated $300,000 to the business programs in 3 local schools, HISD matched his donation, taking the total value to a jaw-dropping $600,000.

Curtis Jackson made this donation with the steadfast promise to his new community, that even more funding will come.

KHOU-11 reports him as stating; “Over the past 20 years, I’ve been focused on academic enrichment projects and making donations to already exciting organizations that can execute it…Following COVID, providing the opportunities and tools for people to make their path easier in entrepreneurship, it’s exciting to be a part of that. And a great way to start things in Houston. It’s three schools now, but it’s going be a lot more. Watch me.”

The promise of more funding is music to the ears of his fellow community members, who are thrilled to see the artist is proving to be such an asset to Houston.

50 Cent has realized that investing in the future of children is the best way to ensure a greater society, and the development of these programs leads to greater expansion of education systems that support this growth.

Given his enormous success with a variety of different business ventures, he’s the perfect person to motivate and inspire the younger community to explore further education and advance their careers.

KHOU-11 states; “G Unity Labs, which the mayor said provide resources and MBA level instruction, will be placed at Worthing, Wheatley ad Kashmere high schools. During the labs, these high school scholars will learn the ins out and outs of running a business, including creating a business plan.”

50 Cent is picking up the pace on his contributions very quickly. Last year he donated toys and electronics to the Houston community, and he has already leapt to making a $3000,000 investment early on in 2021. With drastic moves like this, there’s no telling what he has in store for his next round of funding.

READ NEXT: Ryan Reynolds Opens Up About His Impressive Tech Investment Portfolio

Would you spend £92 to spray bacteria on your face?