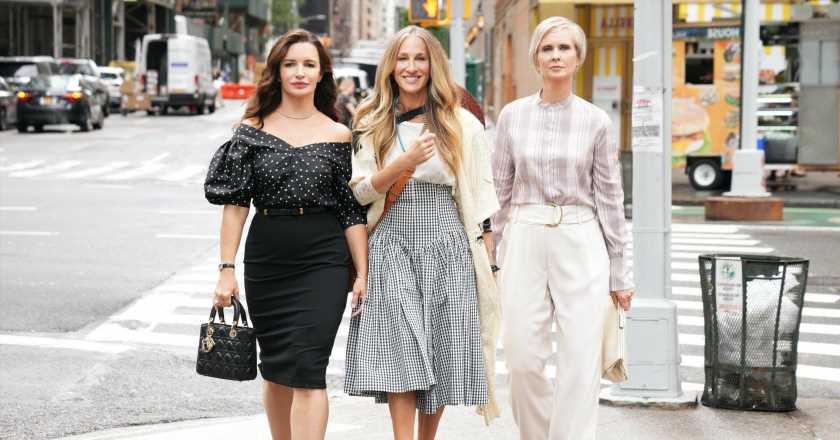 The Sex and the City reboot has just arrived on our screens – but how does it compare to the original series? We asked a SATC superfan and a total newbie to give us their honest verdicts. Warning: this story contains spoilers for the first and second episodes of And Just Like That.

It’s the show everyone’s watching right now, and if you’re not watching it, then you’ll still know that the shocking premiere is the biggest talk of the town right now. We are, of course, referring to the HBO Max revival of Sex And The City, which landed on our TV screens last week with a daring plot twist that saw one character taking their very last breath.

As expected, the news that the beloved show was getting a reboot sent diehard Sex And The City fans into a spin: would the update be as relatable as the original series was 20 years ago? How would it deal with the absence of Samantha? And could the show maintain much of its forward-thinking stance on love, work and friendship as the characters navigated a new chapter in their 50s?

And Just Like That: everything we learned from episode 3 of the Sex And The City reboot

Then again, how would the show land with a new generation of viewers? So strong is Sex And The City’s pop culture legacy that many millennials are tuning in to the franchise for the very first time. What would young women, so used to the likes of Fleabag, I May Destroy You, and Insecure, make of Carrie and her crew?

To no-one’s surprise, opinions differ greatly. So we asked Stylist’s features editor Meena Alexander, a committed SATC fan, and Stylist’s digital writer Lauren Geall, a total SATC novice, to cast their discerning eyes over the first two episodes and give their honest verdicts. Read ahead to find out whether they feel seen by the reboot.

The Sex And The City newbie

And Just Like That: Cynthia Nixon, Sarah Jessica Parker and Kristin Davis reprise their roles in the new Sex And The City revival

“When I first sat down to watch And Just Like That, I wasn’t sure what to expect. I’m not a complete stranger to Sex And The City (I half-watched the first two episodes during the pandemic, and have heard about how great it is from countless friends) but my knowledge only goes as far as a few character names and a couple of key plot points others have written about here on Stylist.

And Just Like That: 47 thoughts I had while watching the first episode of the Sex And The City reboot

With that being said, I was surprisingly drawn to the new series. Granted, the extravagance of it all took a moment to get used to; but once my eyes had adjusted to all the colour and designer dresses, I found it all quite exciting. Of course, none of the character references hit me quite the same as they would a diehard fan of the series (who on earth is Bitsy Von Muffling?) but they weren’t so frequent that I couldn’t enjoy watching.

The weirdest part about the whole thing for me was how much effort they put in to making the series feel 2021. I’m not just talking about the over-the-top ‘wokeness’ on display, either – from Big’s Bridgerton joke to the constant references to the pandemic, rarely a scene went by which didn’t make a point that things had changed. By the time Big made a point of clambering on to his Peloton to enjoy a ride with Allegra, it all felt a bit too much.

Of course, I didn’t have much time to stew in that feeling of discomfort, because the first episode gets serious – quick. Just when I’d started to get familiar with the dynamic between the characters, Big suffered a heart attack and died. While I’d unfortunately already had this plot point spoiled for me in various press releases (the joys of being a journalist), it wasn’t any less shocking. In a weird way, I was actually quite impressed the show’s creators went that far in the first episode – especially after all the excitement surrounding Chris Noth’s decision to appear in the reboot.

And Just Like That episode two recap: we need to have a serious chat about Little Black Dress

All in all, I’d say I enjoyed what I saw of And Just Like That. The second episode felt a little drawn out, but that’s probably only because I have no emotional connection to the series and therefore couldn’t appreciate everything that was going on. Despite all of the drama that takes place throughout the first two episodes, the sense of extravagance and excitement that comes with the show’s setting and styling made it a lot of fun to watch.

The diehard Sex And The City fan

And Just Like That: the first three episodes of the Sex And The City reboot are available to watch now on Sky and NowTV

“We can’t just stay who we were, right?”

This is the line Miranda (or the character who will hereby be known as New Miranda) uses to explain why she quit her corporate job to study human rights law in the first episode of And Just Like That. It is clearly the central signpost, a message direct from the writers’ room to an audience who’ve waited with bated breath to see these characters again after 20 years: Just don’t expect them to be the same. My question is, why not?

And Just Like That: this is how the first episode of the Sex And The City reboot addresses Samantha’s absence

The idea of reuniting with Carrie, Miranda and Charlotte (even if Samantha’s return seemed unlikely) kept me going through lockdowns, political scandals and bleak news cycles. I’ve been watching all six seasons of Sex And The City on a continuous loop since I was 15: I grew up with these women, looked up to them, and couldn’t wait to see them navigate new passions and problems with their trademark knowing wit. But, as much as it pains me to admit it, that anticipatory joy was dampened by the opening episodes of the reboot.

I knew episode one was always going to be clunky. How to bring us up to date with characters we haven’t seen in decades, explain the departure of Samantha and the arrival of a global pandemic,set the characters off on brand new journeys – all in the space of 40 minutes? It was a big ask, and at first I thought the busyness was why it jarred. I ignored the small voice of disappointment in the back of my head and luxuriated in the things I had always loved about this frothy world: the gorgeous fashion, the punny jokes, the luxurious backdrop of Manhattan.

And Just Like That: Kristin Davis, Sarah Jessica Parker and Cynthia Nixon in episode three of the Sex And The City reboot

But by episode two, I couldn’t deny it: these women felt like strangers. Miranda, once so self-assured and whip smart, now drawn as an awkward fiftysomething trying (and failing) to repent for the original series’ most obvious sin: its blinkered whiteness. Though I respect the attempt to right the wrongs of the past, the execution was painful to watch: the Miranda we knew would not speak to her professor as if she was the first Black woman she’d ever encountered, churning out microaggressions at a rate of knots and saying things like “I wasn’t sure if that was a white saviour moment?”. I’d hazard a guess that more than half of all SATC fans would’ve called themselves ‘a Miranda’ at one point – who wants to be her now?

Similarly, I found Charlotte’s self-centred outbursts – wailing about Big when Carrie was trying to quietly process his death, then complaining that she was being ‘left out’ of the group – didn’t ring true, either. Charlotte was many things (judgmental, prim, naïve) but she was never, ever selfish. In fact, her ability to set aside her own scruples when it came to her friends was her singular charm.

Even Samantha, absent in every way that matters, made an uncharacteristic move, fleeing to London in a fury because Carrie no longer required her PR services. She deserved better than to be framed as a petty friend who won’t even pick up the phone when tragedy strikes.

And Just Like That: Cynthia Nixon, Kristin Davis and Sarah Jessica Parker reprise their roles in the new series

Back when I was 15, it felt like these women were laying out the kind of life I could aspire to, one that was as shiny and brave and exciting as they were. That is the feeling I hoped for again as I watched Carrie, Miranda and Samantha in their fifties, but so far, that isn’t what I’ve got. Here’s hoping these beloved characters find a way back themselves – I’m not ready to part with them yet.”

Tom Holland Wants to Reteam with Zendaya for ‘Euphoria’ Cameo