Home » Lifestyle » ‘A lightbulb went on’: Why some siblings never talk again

‘A lightbulb went on’: Why some siblings never talk again

It’s Christmas morning on Sydney’s northern beaches and Ollie (who is using a pseudonym for privacy reasons) is smiling from behind his phone to his two daughters opening presents, telling them to wave to their grandma and grandpa in a video he will send them later that day.

Despite living just two suburbs away, it marks the third Christmas that Ollie and his family are celebrating alone after an estrangement from his two older brothers in 2019. 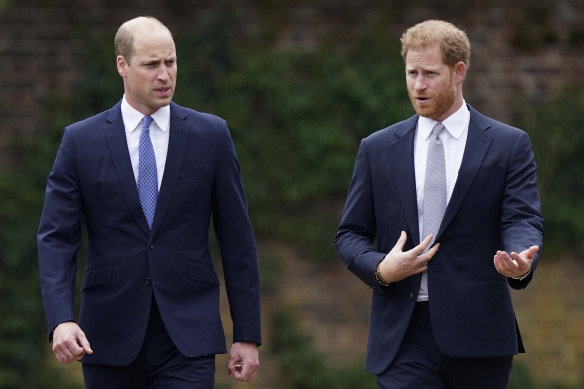 “Obviously, I miss seeing my parents and I would love for the girls to play with their cousins and have that big family experience, but to put it bluntly, I don’t miss the bullshit that comes with it.”

Much like the highly publicised fracture between Prince William and Prince Harry, Ollie and his brothers are close in age and went through all of their major milestones together as kids. Their childhood is one he called “incredibly standard”, with the relationship only changing when Ollie met his wife and began to create his own family.

“Almost immediately, I felt something was off,” Ollie says. “I could tell they saw her intelligence and independence as her being bossy and a bit of a headache. It felt like they hated all of the things I loved about her and I remember feeling really confused and thinking, ‘how could three people who are so similar have such a different reaction to one person?’”

According to Sian Khuman, a psychologist at Sydney’s Relationship and Family Practice, sibling estrangement is a common occurrence in many families and can be triggered when a new partner – like Ollie’s wife or in the case of the Windsors, Meghan, the Duchess of Sussex – comes into the family and interrupts the existing norm, known as homeostasis.

“Traditionally, the family system runs in a way where everyone has their role and everyone knows what’s expected of them,” Khuman explains. “Flexible families can adapt and allow everyone to come to a new balance, but if the family doesn’t have a lot of flexibility and their views are more black and white it can lead to discomfort, conflict or at the extreme end, estrangement.”

For Ollie, little things like comments about his clothes and questioning how much money he earned gradually grew into bigger issues like his brothers calling his wife “the ball and chain” and ignoring a major job promotion he received.

“I’d always seen their behaviour as normal sibling stuff and thought I was just too sensitive. I hadn’t made the correlation between me always being in a bad mood or feeling drained with seeing them,” he says. “When I talked to my wife about what to do, she said it was really difficult for her to watch the people who were supposed to love me make a sport out of knocking me down. When she said that, it was like a lightbulb went on.”

When Ollie asked to be shown more respect, his brothers blamed his wife and cut themselves off from him, a pattern Khuman says is common of estrangements.

“Tensions arise when someone tries to change their role or says they want to do things differently. Usually, it’s the person who wants the change that gets estranged from the family,” Khuman says because the natural instinct is to remain in homeostasis.

In their recent Netflix documentary, Harry & Meghan, Meghan claimed a palace aide had likened the upset her arrival caused the royal family to that of a “foreign organism” that would “be hard at the beginning for them to adjust to this new thing, but then it will be amazing.”

Unfortunately for Harry and Meghan and Ollie and his wife, that day is yet to come.

While many still see Meghan as the cause of all of Harry’s problems, Dr Kylie Agllias, an adjunct lecturer at the University of Newcastle and researcher of family dynamics, says it’s not that simple.

“Estrangements rarely come out of the blue,” she says, with participants in her research describing the situations as “a slow build of tensions, slights and miscommunications, often across years, before a physical estrangement takes place.”

“Often, what appears to be the cause of the estrangement, is simply the straw that broke the camel’s back.”

Such was the case for 68-year-old Susan (who is using a pseudonym for privacy reasons) from Melbourne, who hasn’t spoken to her brother in more than a decade following a messy battle after the death of their mother. Looking back, she now realises the seeds of estrangement stretched back to their childhood and their very different interests.

“He was very sporty and outgoing, whereas I was much more of a bookish child. And in those days, boys were treated like princes and daughters were virtually live-in maids,” Susan says. “It’s not that our parents were bad people, but I can’t remember ever being praised for my school work or when I won awards. But if he showed up on time for dinner they rolled out a ticker tape parade.”

In adulthood, things became progressively worse when Susan’s mother moved into her home following the death of their father.

“He’d call mum and go on and on and never once offer me help or even ask how my day was when I’d answer the phone. It was only ever about him.”

Then, after eight years of caring for her, Susan’s mum passed away and left 50 per cent of her estate to each of her two children. Almost immediately, though, Susan says her brother challenged the will and began to demand a greater share of their mother’s assets.

“He said I made money from having mum live with me and started demanding refunds for times mum had taken my kids to the movies or bought them lunch. It didn’t seem to register at all that I’d put my life on hold to care for mum and keep her from going into a nursing home, it was just all about what he felt was his, and that was enough for me.”

After threatening her with legal action, Susan eventually agreed to give her brother 60 per cent of their mother’s estate, saying, “I didn’t want to be at war; I was grieving and it seemed like a fair price to pay to make him shut up and go away.”

Twelve years on, Susan says she regrets not standing her ground and still harbours anger over her brother’s behaviour, but notes, “I also have to hold my parents responsible for it because they made him who he became, and that’s quite difficult for me to sit with.”

As to if she misses him or hopes to one day reconcile, she responds resolutely, “not at all. I don’t like him, it’s really that simple. You can’t miss company you never enjoyed to begin with.”

When it comes to Princes William and Harry, whose issues have been aired across the world and read about by millions, the future of their relationship remains unknown. Any hope of reuniting, though, would require a lot of effort on both parts, Khuman says.

“Both people have to want some level of contact or connection in the relationship and have to be willing to do it. Then, it’s about understanding what the estrangement is about. If you have very different opinions of something that happened, you’re not ever going to negotiate or come to a middle ground, but you might be able to say ‘you saw it that way, I saw it this way’ and talk through each other’s perspectives and work to have some kind of relationship that suits both of them.”

For Ollie, the hope is to one day have another holiday with all of his family present.

“At the end of the day, they’re my family and I love them. I hope they can come to the table, but who knows. For now, I’m focusing my energy on my own little family, who I know loves me.”