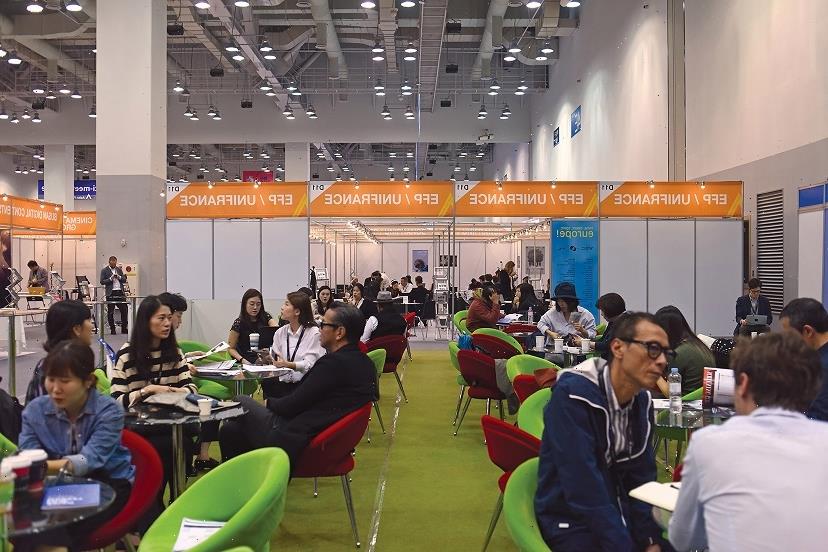 International film market organizers may collaborate more in the future as they attempt to bring back in-person events by next year.

Paillard explained his recent experience with operating an online market in 2020 and a hybrid one in 2021. “[It was] easier if we just did online instead of hybrid. [But] we didn’t achieve the same success in 2020,” he said.

As the pandemic has restricted international travel, film buyers and sellers have found other ways to do business, such as video calls and link sharing. And reducing the need for meetings and physical screenings changes the purpose and modus operandi of organized rights markets, possibly with long-lasting effect.

“Maybe even the model of sales companies’ presence will change. I’m not sure they’ll still need very big offices, apartments or booths,” Paillard said. Companies may also cut the number of people who travel.
Oh spoke of the need to support Asia’s film industry growth, and suggested cooperation between Berlin, Busan, Cannes and Hong Kong.

“It might be dangerous for projects to be overexposed, perhaps different segments for each market [could work],” Paillard replied. But he conceded that having a unified project platform would help potential co-producers navigate better. “It gives a possibility to follow up with projects, because very often you hear about a project but 6 months or 1 year later, it’s difficult to trace.”

And the wheels are in motion with smaller partnerships already springing up.

The Hong Kong – Asia Film Financing Forum (HAF) sends a handful unmade projects each May to attend the Cannes Market. Berlin’s EFM is similarly working with Rotterdam on their conference programs.

“It is more sustainable to collaborate, start a conference in one market as a first step and follow up in another. So, we started this year to work with Rotterdam [via] a reality check online conference and did the second part like a ‘Think Tank’ in Berlin,” said Ruh.

But the market bosses had mixed views on the integration of film and series at markets.

Ruh said he embraces the integration of TV and streaming within the EFM and explained that Berlin has hosted series-related activities for nine years. “We not only present series for acquisition in the market, but also put talent in the spotlight, similar to Series Mania. [The Berlinale Talent Development Program] helps to find co-pro partners and acquire writers and showrunners,” said Ruh. “I attended Series Mania [in August] and met many of the same producers I knew from the arthouse film business.”

“Series isn’t a priority [for Cannes], but I see a connection between film and video games. Book adaptations also have been done for a few years. We don’t want people to drown [in information], but rather create niche events [for market goers],” said Paillard.

Oh said that Busan plans to create a series market and develop investment programs at future editions of ACFM. “Film and TV have different ecosystems and business domains [in Korea]. However, with increased interaction between film and OTT platforms, we must cooperate with them and protect the rights of filmmakers as well,” he said.

The shift of filmmakers towards TV and streaming landscapes have seen film producers and makers losing control of their IP rights to OTT platforms. And the market bosses see this as an opportunity for their events to have a continuing role in the field of training.

“We can find ways for their projects to reach the audience. That is our core business for the coming years.” Wong said. “We help producers polish their script and manage dealings with international distributors.”

Oh argued that markets can help training programs foster Asian industry talent. “There are many university film courses all over Asia, and despite wanting to collaborate, there are no organic networks among them, as there are language barriers and differences in curriculum and ideas,” he said.

Further change is afoot. “From next year, we’ll be changing ACFM into a story market and we’ll become an Asian story hub and a starting point for all content,” Oh said.

Black Friday Office Chair Deals 2021: What to expect this November

Stroke: The warning sign when you brush your teeth of the life-threatening condition
Recent Posts