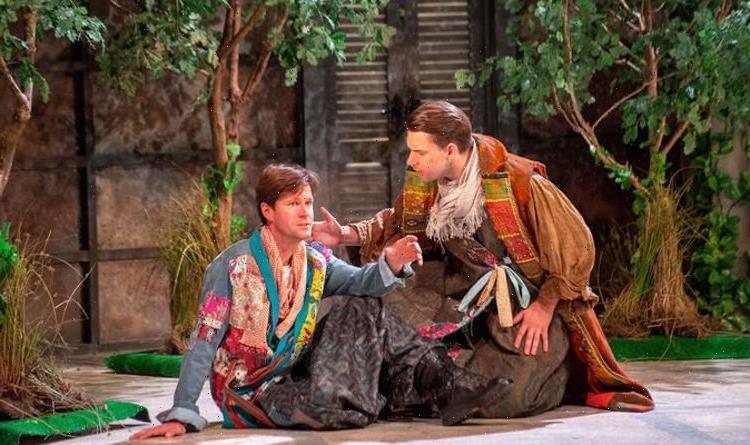 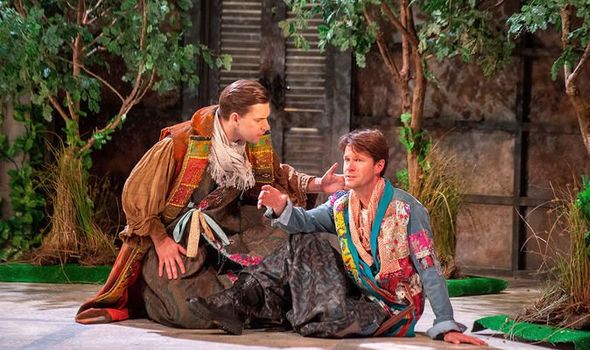 There has long been some discussion as to which category this work should fall into: is it a pastoral, a serenata or a ‘little opera’ as the composer himself referred to it? In Dorset’s semi-staged version, it is a deft combination of all three – and how well it lends itself. The situ set from the festival’s Don Giovanni was still there in the background, but clever lighting from Marc Rosette, and the arrival on stage of a forest of oak trees, turned the whole into a sumptuous woodland glade.

The story comes from Ovid with some re-writing and additions by John Gay (he of Beggar’s Opera fame).

It tells the story of the sea nymph, Galatea (deliciously sung by Elizabeth Cragg), who falls in love with the shepherd, Acis (Peter Gijsbertsen, in his second major role for the festival).

After initial bliss, their lovemaking is interrupted by the monster, Polyphemus (bass, Lukas Jakobski, also in his second festival appearance, who relished getting his tongue around O Ruddier than the Cherry…) who is also in love with Galatea and who eventually crushes Acis with a rock…

British-based Hungarian director, Bence Kalό, really made the most of this opportunity to showcase his talent.

With fourteen choristers dressed entirely in black, he bade them become whatever he wanted – including the birds of which Galatea sings in Act I. With pieces of simply folded white paper, they flapped these ‘wings’ amongst the trees and went off in search of her lover: beautifully poignant at a moment that could have been risible.

Music Director, Jeremy Carnall, was at the helm once again and his orchestra sounded even better than the night I saw Don Giovanni.

Certainly they had assumed that crisp Baroque style so redolent of the period, but, because they weren’t using period instruments, the tone was warmer and far more pleasing.

A special word for Baroque tenor, Kieran White. He replaced an indisposed singer in the role of Damon, Acis’ friend, late in the day and his true ‘haute-contre’ was possibly the clearest and most focused voice of all the soloists.

Now firmly established in the industry, he happily acknowledges that his operatic life began in the chorus of the Dorset Opera Festival. Yet another ‘emerged’ artist making a name for themselves through this exciting Company.