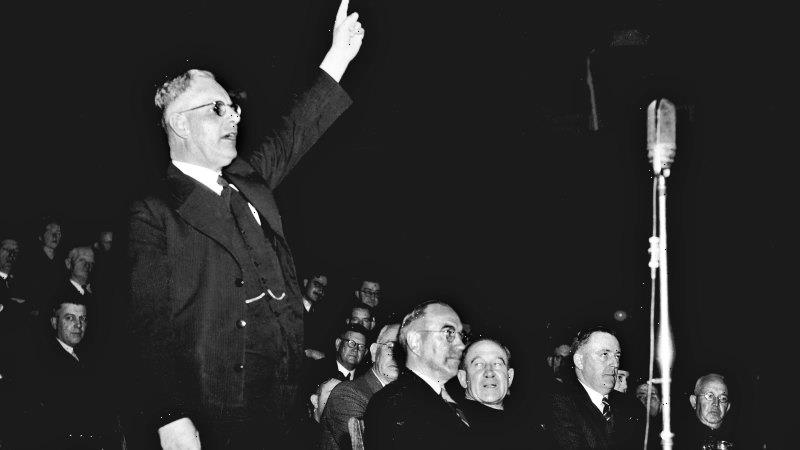 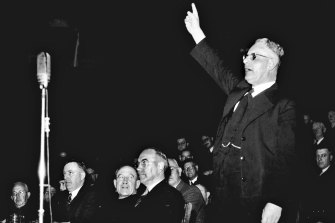 John Curtin’s speaks at a rally in 1942. Audiotapes of his speeches are under threat.Credit:The Age

Anzac Day each year reminds us of the vital role that history plays in our national identity but the federal government is failing to protect the national archives which are the raw material of that history.

As The Age reports today, the National Archives of Australia have been starved of funds because of government cost-cutting. Annual funding has been cut by $7 million or 10 per cent and staff have been slashed by 14 per cent since 2014-15.

Precious paper and celluloid records that record extraordinary and controversial moments in our nation’s history will literally rot away unless something is done. They include wartime speeches by prime minister John Curtin, video films of early Antarctic expeditions and video of the 1998 Constitutional Convention to debate becoming a republic.

The federal government in March released a review by senior public servant David Tune which recommended spending $67.7 million to help digitise these documents before they turn to dust or jelly.

But it also called for significant investments to help store and effectively manage all the other documents that are created by government departments.

This is not just about family historians and school projects, or even about commemorations and our education as citizens. Many of the documents that are kept in the archives are needed to decide practical policies. As the American novelist William Faulkner said: “The past is never dead. It’s not even past.”

To take one example, the Royal Commission into Institutional Responses to Child Sexual Abuse which struggled to reconstruct horrific crimes from decades ago, in its final report called for better archives.

Another example is the role played by historical research into colonial era land title which underpinned the High Court’s Wik and Mabo decisions on native title.

In its emaciated state, the archives cannot adequately collect, manage and make accessible to those who need them the huge volume of documents generated each year.

In many cases the government departments which produce the information are contributing to the problem by failing to supply documents in a usable form. An Australian National Office of Audit report in 2018 said the Department of Immigration and Border Protection’s records were in a “critically poor state”.

Researchers are complaining that the archive’s financial weakness is also delaying, by as long as seven years, the release of sensitive information which might need to be kept secret because of security, privacy or other exemptions.

The question of what should be released is complex. The release of Sir John Kerr’s private letters to the Queen, the so-called “palace papers,” went all the way to the High Court last year. But the Tune review says the archive needs more staff trained in the issues who can take decisions without relying entirely on advice from the cautious government departments who produced the material.

The federal government should quickly implement the Tune review’s recommendations in all these areas. Mr Tune calls for investment of about $340 million over seven years but he says it would eventually save money by making the government more efficient.

The Morrison government is committed to spending $500 million to rebuild the already excellent National War Memorial. If it can find that money, it should be able to fund the archives which are just as vital for Australians to make sense of their history.

Note from the Editor

The Age’s editor, Gay Alcorn, writes an exclusive newsletter for subscribers on the week’s most important stories and issues. Sign up here to receive it every Friday.