Home » Lifestyle » All the ‘Breakfast at Tiffany’s’ Nods in Beyonce’s New Campaign: Details

All the ‘Breakfast at Tiffany’s’ Nods in Beyonce’s New Campaign: Details

Breakfast with Beyoncé! For Tiffany & Co.’s latest campaign, the 39-year-old singer not only channeled Audrey Hepburn in what’s debatably their chicest campaign to date, but she also gave a handful of other nods to the star’s iconic film, Breakfast at Tiffany’s.

And to say fans have been simply freaking out for the past 24 hours over the ABOUT LOVE campaign would be a sheer understatement. The Twitterverse is in an all out tizzy — and for good reason.

First and foremost, let’s dive into the jewelry of it all. In the gorgeous campaign, the Ivy Park designer is frosted in diamonds. The most notable piece however is THE Tiffany Diamond, which weights a whopping total of 128.54 carats and has 82 facets.

The piece, which was originally mined in 1877, has never been featured in an official campaign and has only been worn a grand total of 3 other times. The yellow stone was donned by Mary Whitehouse, the wife of an American diplomat, Lady Gaga, who rocked the piece at the 2019 Oscars, and, of course, Hepburn. Beyoncé is the first Black woman to wear the stone.

Of course, Queen B had to put her own spin on things though. The iconic diamond was re-set in 2012 with 100 more carats of diamonds for its 175th anniversary. While the piece, which perfectly matched her 22-carat yellow diamond ring, was worn backwards and carried a little extra weight, Beyoncé’s ensemble was a clear nod to Holly Golightly. From the updo to the white gloves, the inspiration was undeniable.

Beyoncé Dressed Like the Winner She Is at the 2021 Grammys in All Leather: Pics 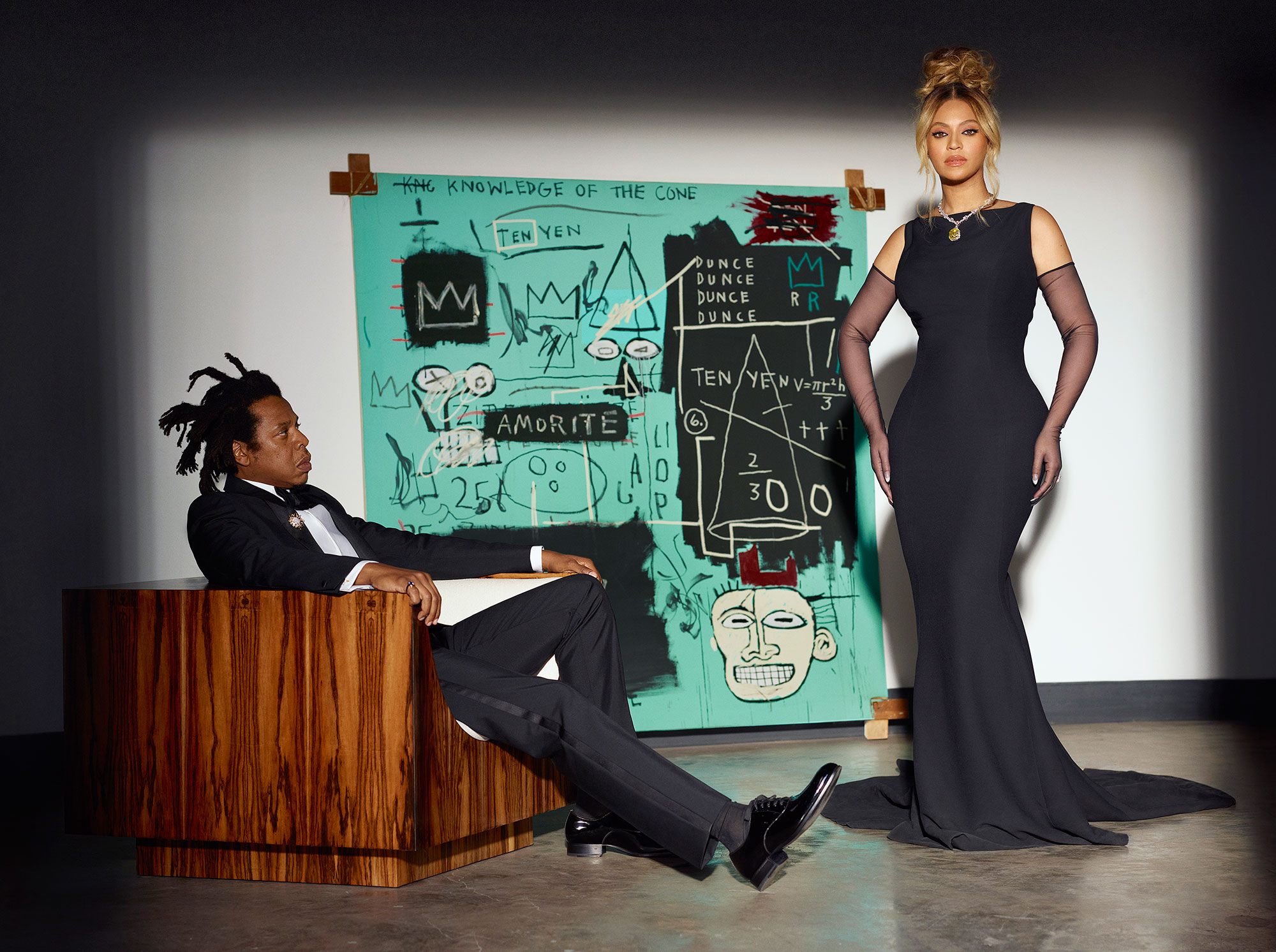 Think a few photos are all that’s going to be served up for this revolutionary moment? Think again. Because in a few weeks time, the jewelry brand will be dropping a mini film which features Queen B serenading Jay-Z to “Moon River.” The song was originally made popular by Hepburn, who sung the song in the 1961 film.

Another groundbreaking moment for Beyoncé and Jay-Z stans? This marks the first campaign that the duo has done together. The 51-year-old rapper hasn’t even made an appearance in his wife’s Ivy Park campaigns, which have previously had cameos by their children Blue Ivy, Rumi and Sir.

The list of history-making moments doesn’t stop there – oh no. The campaign, which officially launches on September 2, featured a never-before-seen Jean-Michel Basquiat painting. The piece, which is appropriate colored Tiffany Blue, has been part of a private collection up until now.

'Nine Perfect Strangers': Why Samara Weaving Says She Was 'so Weird Around Everyone' on Set