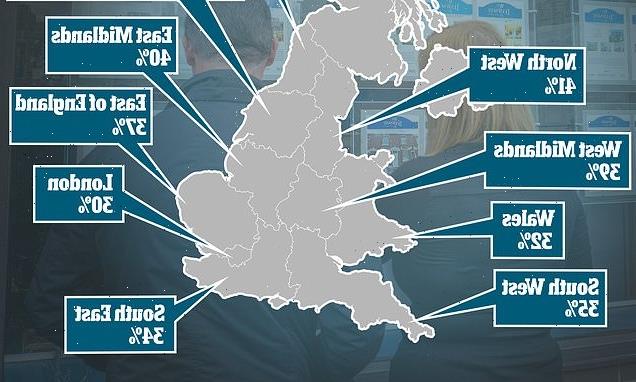 How many homes near you are selling for MORE THAN the asking price? Almost four in ten properties beat their price tag in red hot market

The number of homes selling for asking price or above is increasing as buyers chase down homes in a buoyant property market, new figures have revealed.

The percentage has been rising since the housing market reopened last year – in May in England, and in June in Wales – and has now reached a record high

At the most recent point asking and selling prices could be compared, in January this year, almost four in ten homes sold in England and Wales – at 37 per cent – achieved their final asking price or above, according to Rightmove.

With annual house price inflation accelerating since then – to 10.9 per cent in May, according to Nationwide Building Society – the proportion of asking price or higher deals may have grown further. 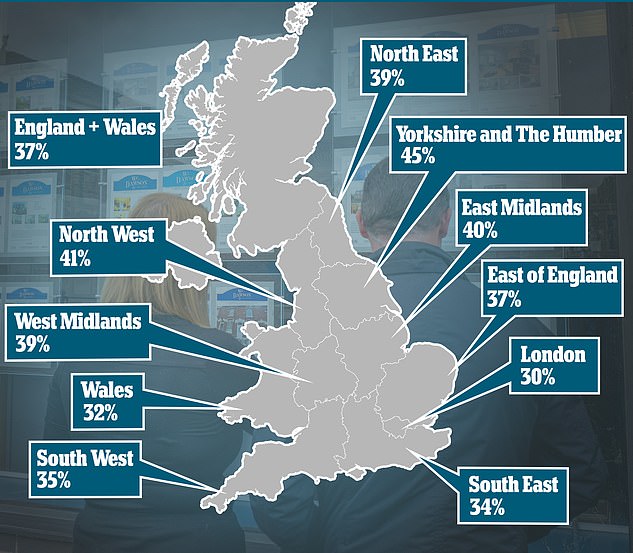 In January this year, more than a third of homes in England and Wales – at 37 per cent – achieved their final asking price or above, according to Rightmove

The property website based its research on its own asking prices and sold price data from the Land Registry.

The latest figure is an increase from 28 per cent in January 2020, and significantly higher than the long-term average of 23 per cent between 2005 and 2021.

The last record was set back in May 2016, when 36 per cent of homes sold for the asking price or above.

The region with the greatest number of asking price or more sales was Yorkshire and the Humber where 45 per cent of sellers saw their home selling for at least the listed price tag.

London saw the smallest proportion of homes reach at least the asking price, but even in the capital the figure was 30 per cent. 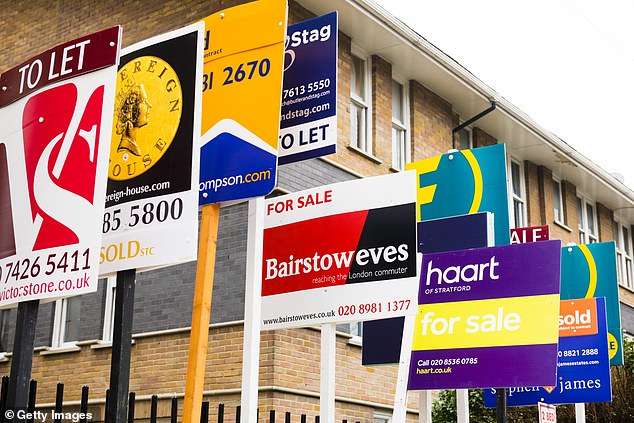 Among the properties that reached asking price across England and Wales in January, 18 per cent sold for more than the listed price, which is the same as the previous high of 18 per cent in May 2016.

Meanwhile, 19 per cent sold for exactly the asking price.

The long-term average between 2005 and 2021 for the proportion of homes selling for over the asking price is 10 per cent.

Rightmove’s Data Tim Bannister said: ‘This unique study quantifies the buyer bidding wars that agents have been reporting since the markets reopened last year, and is further evidence of the unprecedented market that emerged from the various lockdowns with many people deciding they wanted or needed to move as their requirements on space and surroundings changed.

‘I would, however, caution against sellers being tempted to ask their agent to put their property on for a price that’s much higher than market value.

‘Although many agents are seeing buyers scrambling to put in offers, if your property is priced too high at the beginning it will stick out like a sore thumb as buyers will compare the asking prices of similar properties in the same area.

‘You need to first get people through the door, even for desirable properties in the hotter areas.

‘My advice would be to listen to your agent’s expert opinion, and be mindful that the market is now showing early signs of cooling.’

What final offer should you make?

What should you offer if you’re faced with a bidding war on a property for sale that you want to buy and are invited to make your best and final offer?

We spoke to two experts about how to approach reaching the final amount you bid – one an estate agent selling homes and the other a buying agent, who acts for purchasers.

Robert McLaughlin, of estate agents KFH, said: ‘The buyer should first ask their agent for advice to get an idea on what the seller might accept as a final offer.

‘Buyers should be prepared to offer the maximum price they are willing to pay.

‘In the current market, buyers who attempt to offer an amount lower than the asking price may not endear themselves to the vendor. Buyers should ensure that they are flexible on their time frames, build a good rapport with the vendor and reiterate their position and the steps they have taken in writing.

‘Vendors who receive multiple offers at final stage may choose the buyer who they would most like to see living in their home.’

Buying agent Henry Pryor said: ‘Work out what the property is worth to you, add £100 and that’s what you should bid.

‘Don’t worry whether it is above or below the asking price. A property is worth what you will pay for it, the seller gets to decide if it’s enough.

‘If someone pays more then they either liked it more than you or had deeper pockets.

‘I’ve done 24 ‘best and final offers’ this year, and been successful at 15. It’s a lousy way to buy a house and the best you can do is to offer what the property is worth to you, and to stress your position – such as having your finances and solicitors in place solicitor – and pray.’

The research matched individual Rightmove listings to Land Registry transactions and analysed the difference between the final asking price on Rightmove with the eventual sold price.

Data runs from January 2005 to January 2021, which is the latest month with sufficient sold price data available from Land Registry. 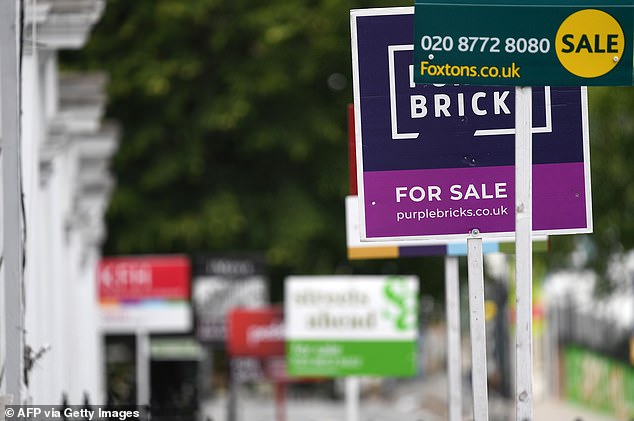 Bruce King, of estate agents Cheffins in Cambridge, said: ‘As the winter of 2020 saw one of the busiest periods in the property market to date, the number of completions of properties in January were also much higher than usual, with the majority of houses being sold at over the asking price.

‘The last quarter of 2020 saw almost double the number of property sales agreed in comparison to 2019, as a number of factors impacted the housing market.

‘The coronavirus pandemic continued to put massive pressure on property sales outside of London and as buyers moved out to the regions in their droves, we saw a frenzied market with properties coming to the market selling within only a matter of days, with competitive bidding situations fast becoming the new normal.

‘The festive period presented itself with a lack of Christmas parties or holidays and so people were less distracted through the back end of last year and more willing to consider a January completion date.

‘For many they wanted to start the New Year with a new start, in a new property, and were willing to pay over the asking price to make that happen. This market behaviour we saw is an unusual phenomenon however, and it’s likely that the market will start to settle once the world slowly begins to open up again.

‘I’m doubtful we will see that level of ferocity in the market again this year. What has also certainly been the case over the past 18 months or so is that people have reignited their love for the house they live in. Home is now much higher on their priority list, rather than eating out, holidays or cars.’

And Marc von Grundherr, of estate agents Benham & Reeves in London, said: ‘It’s little wonder really that such a large proportion of home sales are at asking price or above given that the stamp duty holiday and pent up demand has led to a 50 per cent hike in buyer demand and therefore transactions.’

Kaley Cuoco on 'Flight Attendant' sex scene: 'I was totally out of my element'
Recent Posts