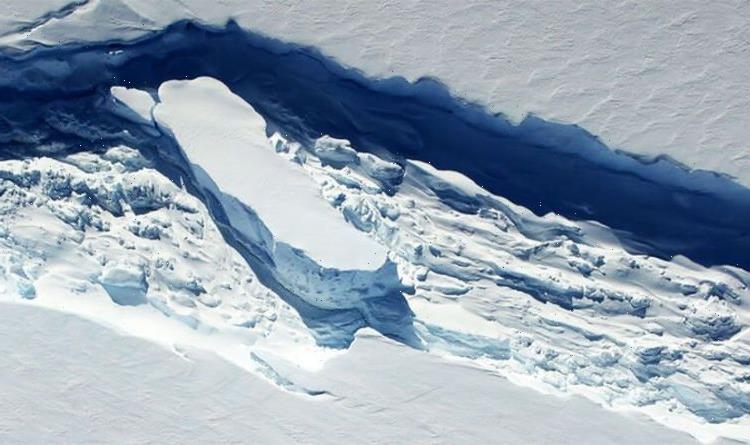 Teams of scientists at the University of California, Irvine (UCI) and NASA have examined in close detail the calving of an iceberg four times bigger than London from the Larsen C ice shelf. The colossal chunk of ice, officially dubbed A-68, broke off from Antarctica in 2017 and measured roughly 2,240 square miles. In a new study published in the journal Proceedings of the National Academy of Sciences, the US scientists have now identified the processes that led to the calving.

According to the research, A68 broke likely off from the Larsen C shelf as a result of the thinning of ice melange.

Ice melange is the slushy mix of frozen seawater, wind-blown snow and iceberg debris that typically helps to glue together iceberg rifts.

In the case of A-68, however, the scientists report thinning of the ice melange helped contribute to the iceberg breaking off.

Warm waters circulating right under the ice shelf, combined with warm temperatures on the surface, likely caused the ice melange to weaken over many years.

The discovery could have dire consequences for the planet’s coastal regions, as a mix of climate change and global warming is already contributing to the melting of the ice caps.

Eric Rignot, study co-author and UCI professor of Earth system science, said: “The thinning of the ice melange that glues together large segments of floating ice shelves is another way climate change can cause rapid retreat of Antarctica’s ice shelves.

“With this in mind, we may need to rethink our estimates about the timing and extent of sea level rise from polar ice loss—i.e., it could come sooner and with a bigger bang than expected.”

The researchers came to their worrying conclusions with the aid of data collected by NASA’s Operation IceBridge mission.

They then analysed hundreds of rifts in the Larsen C ice shelf to determine which were most vulnerable to breaking.

The researchers selected a total of 11 top-to-bottom cracks and ran models to determine which of three scenarios would make them most likely to break.

The results, however, were much more surprising and showed that a thinning ice shelf without any change to the melange still managed to heal the rifts.

The researchers found an annual widening rate of 529ft to 72ft.

When modelling for the melange thinning on its own, the results showed an annual widening of 249ft to 367ft.

He said: “The melange is thinner than ice to begin with,” he said. “When the melange is only 10 or 15 meters thick, it’s akin to water, and the ice shelf rifts are released and start to crack.”

Even in the winter, warmer waters circulating through the ocean can reach the melange because rifts in the ice shelf run the depth of the shelf.

Professor Rignot said: “The prevailing theory behind the increase in large iceberg calving events in the Antarctic Peninsula has been hydrofracturing, in which melt pools on the surface allow water to seep down through cracks in the ice shelf, which expand when the water freezes again.

“But that theory fails to explain how iceberg A68 could break from the Larsen C ice shelf in the dead of the Antarctic winter when no melt pools were present.”

He added: “We have finally begun to seek an explanation as to why these ice shelves started retreating and coming into these configurations that became unstable decades before hydrofracturing could act on them.

“While the thinning ice melange is not the only process that could explain it, it’s sufficient to account for the deterioration that we’ve observed.”