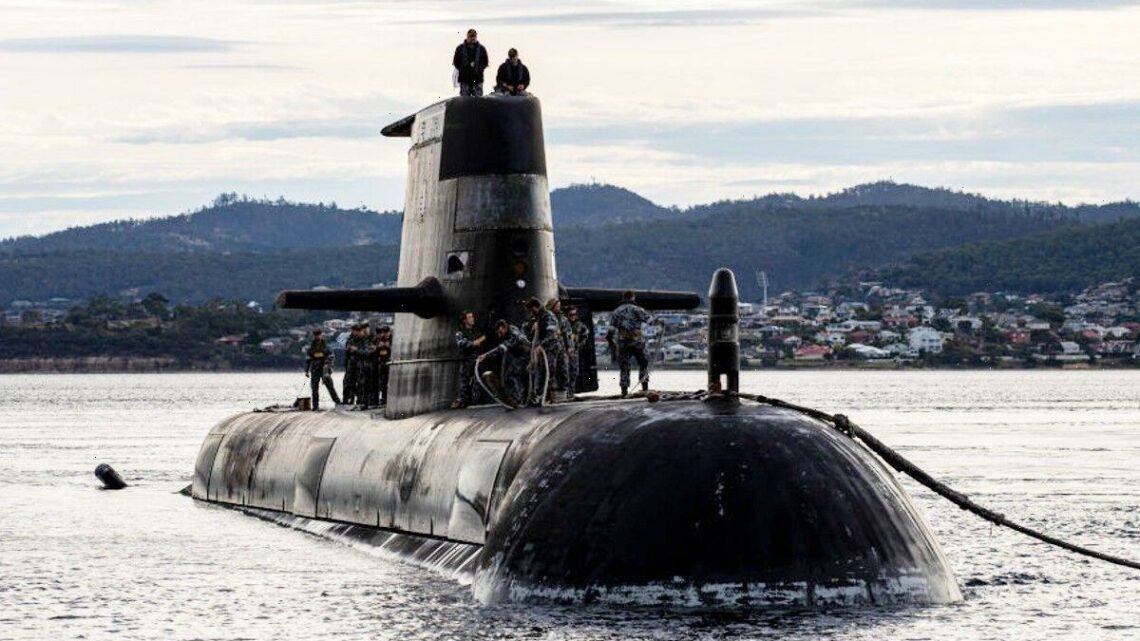 France 'could join AUKUS' in a few years says Shields

The deal between the three nations saw plans to develop and launch nuclear-powered submarines in place of previously agreed French-made conventional diesel-powered vessels. Diplomatic fallout followed the announcement of the deal, seeing the France Foreign Minister Jean-Yves le Drian calling the deal a “stab in the back”.

Initial estimates would have seen the French project cost Australia in the region of £71.5billion ($90billion)

But a new report suggests Australia may struggle to match the required funds required for the AUKUS deal, in particular as military personnel targets are already falling far short of the required numbers.

The figure – which included the Department of Defence and the Australian Signals Directorate – worked out to be $133,191,781 a day, according to the Australian Strategic Policy Institute’s annual report on the defence budget.

Author of the report, Dr Marcus Hellyer, said there was “no doubt that the ADF was getting better” but he also warned of risks inherent in an acquisition program built around “megaprojects”.

He continued: “Such projects take years or decades to design and deliver while spending huge sums for little benefit in the short term.

“When they encounter problems, those problems are big.”

The report noted that the now-abandoned French Attack-class submarine programme had “cost over $4billion and delivered nothing”, while the Hunter frigate programme continued to experience delays “and won’t get a vessel into service for over a decade”.

The report continued by saying though the nuclear-powered submarine program envisaged under the AUKUS deal had “the potential to deliver a huge step-up in undersea warfare capability”, it was “the mother of all megaprojects” with a risk profile to match.

Previous plans revealed by the Australian Government pencilled in targets to spend $270billion on new and upgraded capabilities over the next decade.

During the time of the proposal in 2020, both major political parties in Canberra approved the proposal.

Yet the latest information suggests funding was not “even sufficient to deliver the current investment plan”.

The damming investigation continued by saying: “That programme includes platforms far larger or more numerous than those they’re replacing as well as entirely new capabilities, all requiring a much larger workforce.

“Many capabilities have ended up costing more than was originally budgeted for in Defence’s investment plan.

“The nuclear submarine programme will cost significantly more than the Attack class, it’s anybody’s guess how much more.

“So the first order of business should be for the government to understand the affordability of the current plan.”

One of the first projects of incoming Defence Minister Richard Marles is to assess the capability gap between the existing Collins Class submarines currently used by Australia, compared to the nuclear-propelled submarines proposed in the AUKUS deal.

During a recent military defence event in London, Australian officials told Express.co.uk the AUKUS deal may bring further concerns to the country.

One official said: “With the US leading the project, we will essentially be forced into adhering to US orders.

“Furthermore, we do not have the infrastructure to maintain such a fleet, and hence will rely heavily on support from the US and UK.”

With the AUKUS deal likely to see realistic delivery times well into 2040, some naval officials in Australia are calling for a stop-gap until their arrival.

Former submariners with over 500 years of collective service in the Royal Australian Navy are warning a newer version of the Collins-class boat is needed as a measure before the AUKUS nuclear-powered submarines start hitting the water.

The veterans, who have served on Australia’s current submarines and the predecessor Oberon-class, are urging Defence to consider building an interim boat based on the Swedish-designed Collins to address a looming capability gap.

In an “Expression of Grave Concern”, the group argues: “Australia must keep the Collins submarines running until 2040+ or acquire some new conventional submarines.

“The fact is that arguably both must be done, or the Collins submarines will be retiring at age 45 and beyond.”