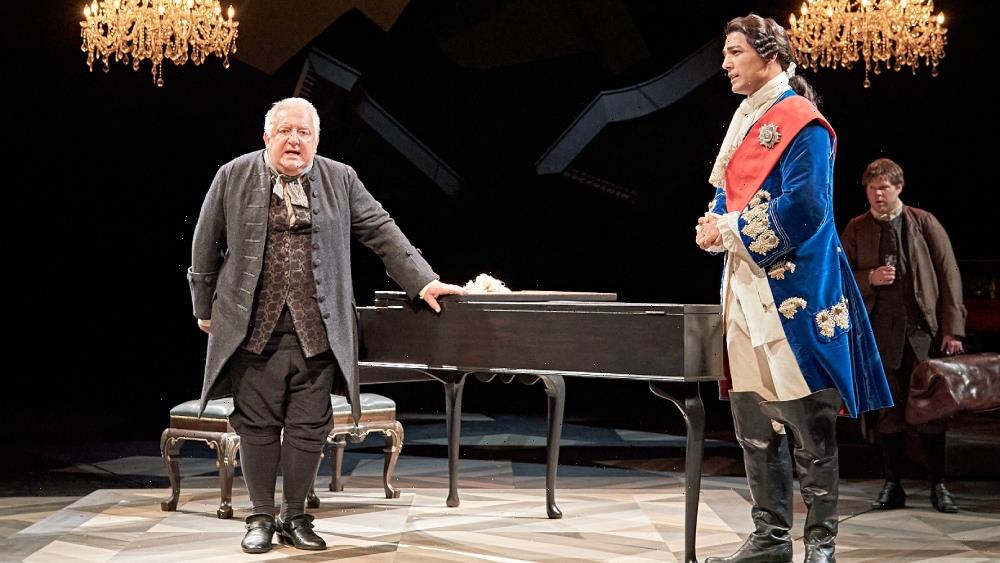 “The whole point is to combine two complementary or contrasting thoughts in the same moment. Two feelings in the same moment.” Johann Sebastian Bach, the 18th century’s uncontested genius of Western music, is explaining counterpoint, the defining characteristic of his revolutionary work, to his son and pupil Carl. Although counterpoint is a technical term it’s also the key to both the overwhelming emotional power of Bach’s music and Nina Raine’s fascinatingly balanced new play “Bach & Sons” — or rather, it should be. Sadly, director Nicholas Hytner’s fatal miscasting of thoughtful Simon Russell Beale in the tyrannical title role robs the play of its potential.

As outlined in Raine’s more-than-biodrama, it’s not that Bach had a working life, it’s that his work consumed his life to the exclusion of (nearly) all else. Except, of course, the fact that two wives bore him twenty children, ten of whom survived to adulthood. But with the exception of three scenes including one deft, amusing rehearsal of him exasperatedly conducting a choir of singers he regards as near hopeless, the play consists almost exclusively of portraits of troubled family life. Yet every one of them is dominated by his literal or implied presence as composer, teacher, thinker and father.

His utter dedication to music produces serious marital disharmony. At the very least we witness his stubbornness and fury with anyone outside his household who gets in his way. And there’s more in reports of his attitudes to people he works with, including being told, comically in passing, that he stabbed a bassoonist with a knife.

His first wife Maria Barbara (patient Pandora Colin) describes him as “the most impatient man I know.” She, his two composer sons Carl Philipp Emmanuel (Samuel Blenkin) and Wilhelm “Willy” Friedrich (Douggie McMeekin) and second wife Anna Magdalena (Racheal Ofori) persistently describe him hurting their feelings, which is putting it mildly. The word “cruel” is used repeatedly to describe him, the last time when Carl confronts him by telling him, “You can be cruel without even trying.”

Indeed, relatively early in the play, Carl asks his mother, “Is Dad cruel?” It comes as a surprise, since Russell Beale’s performance has not suggested that this is the case. That this is at variance with the script is underlined by his mother’s placatory response, which only makes dramatic sense if we’ve seen him being as cruel as his son suggests.

But Russell Beale’s performance never shows us sustained anger, let alone cruelty. His Bach is an undeniably remote, work-obsessed father who plays favorites with his children. In Raine’s script, Bach dominates the family and the family business as the character Logan Roy does in “Succession,” but Russell Beale denies the script’s buoyant savagery that, as he hurls insults, could raise complicated laughs. The play’s comic register goes almost entirely untouched.

Raine’s gamble with her play is her own use of counterpoint. She is contrasting vivid explanations of how Bach’s music works with fiery emotional content driven by Bach’s character. But without fire burning from an angry man whose unpredictable emotions can frighten his family, the temperature plummets. Tension is leeched from scenes, which means her writing feels discursive when it could be dramatic.

That missing sense of power is compounded by the absence of sex, which is missing in both his performance and in Hytner’s elegantly designed but too clean and tidy production. Bach’s sons describe their father as a shagger, someone who has had sex outside the marriage. We also have his first wife realizing that a soprano he has hired is about to supplant her, but even the suggestion of sexual heat is almost never, as it were, made flesh.

Equally problematic is that with the fire missing at the play’s center, the surrounding actors, principally the sons, have to up their game to breaking point. This results in performances spiraling towards caricature. Willy, naturally gifted but despising rules and his father’s behavior, has to overplay the drunk card. The less obviously talented but dogged Carl — who, the play suggests, is closeted — winds up being presented as near one-note neurotic.

The highly musical Russell Beale was a boy chorister and has spoken eloquently in interviews of his profound admiration for Bach’s genius. The part should have fit him like a glove, but he has let his admiration stand in the way of Raine’s play. Sadly, the adage “Be careful what you wish for” has rarely been expressed more completely.

Aidan OShea the key for Mayo against Dublin? Kieran Donaghy and Peter Canavan discuss how to best utilise the Breaffy man