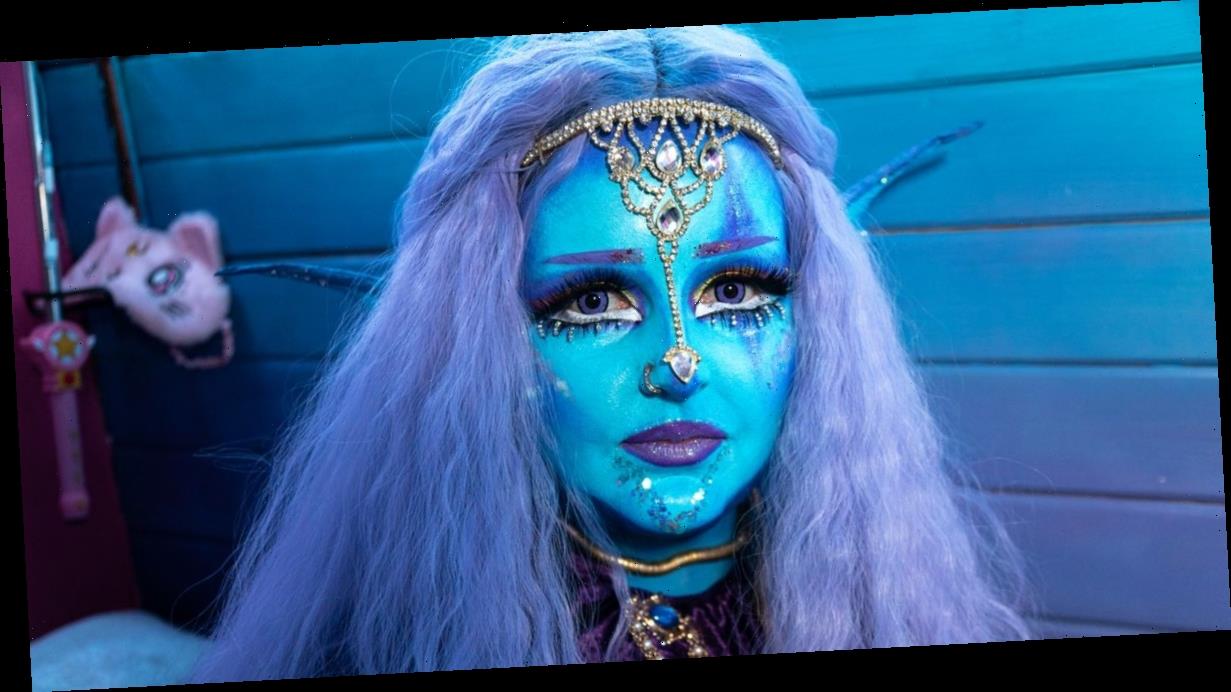 Lhouraii Li found fame when she was dubbed the Barbie of Bradford.

But for the past six years, crippling agoraphobia has left her unable to leave her tiny house boat – or even look out of the window.

Lhouraii now only feels comfortable when she covers her entire body in blue paint and is desperately searching for a way to dye her skin permanently.

She explained: "I’ve always wanted blue skin. Whenever I’d watch films or shows or see a game with a blue character I’d just think it looked so beautiful.

Lhouraii uses huge amounts of make-up to turn all her skin blue and wants to find a way to be this colour all the time.

She has even tried sitting in a bath of blue hair dye but was left disappointed when her skin quickly returned to its usual hue.

Lhouraii said: "I don't paint myself every day just because I can’t afford the amount of paint that would take. But I've tried a lot of things to become blue."

Her inspiration is Diva from the film Fifth Element anthe Zora from video game The Legend of Zelda: Ocarina of Time.

And she manages to keep the cost of her unique style to a minimum by using “the cheapest good makeup” she can find, which works out to around £10 a month.

The nail artist now sells her press-on nail and clothing designs online, working from her brightly-colored canal boat where she lives with her boyfriend of 11 years, Nathan.

She also shares her unique makeup and fashion on social media, where she has managed to rack up close to 5,000 followers on Instagram as @lhouraii .

But despite her thriving social media presence, it’s been four years since Lhouraii has been in a public place due to the agoraphobia she developed over the last six years.

She isn’t sure of the precise cause but says some “bad events” led up to the start of her disorder – though she can’t remember the specifics.

Lhouraii explained: “Agoraphobia, for me, is a fear of people.

"I can go outside as long as it’s countryside and there’s no people around but I can’t go anywhere where there’s people – so streets, shops, and populated areas.

"I have a problem with my memory so it seems like decades ago [that I went out into society] because I don’t remember things.

While she deals with the agoraphobia and builds up the courage to start therapy, Lhouraii says the blue paint and her canal boat with custom decor make her feel better.

She explained: "I’ve always felt quite alone and like I don't belong and it's a really horrible feeling.

"So I tried to make myself a little world where I kind of feel like I do belong.

"I’ve got pictures of space in the windows, because I'm in here 99.9% of the time so if I'm feeling down, I can pretend like I exist in a place that’s happy and just look like I'm in a spaceship or something.

"And I think that's the same with being blue as well – it’s just a way for me to feel like myself."

Lhouraii started the all-blue look two years ago but before that she would often use white face paint with blue eye shadow.

She says the latest look is an evolution of her previous Japanese fashion-inspired style of six years ago.

Lhouraii explained: “My style used to be mistaken as me trying to look like a Barbie and I wasn't actually.

"The style was a Japanese subculture called Gyaru and I still consider myself Gyaru but just blue."

She has previously tried different colour body paint, including purple which she says didn’t feel right, but says blue has always felt like her natural skin color.

Lhouraii also makes most of her elaborate outfits, buying cheap clothes and customising them to fit her taste.

Boyfriend Nathan who also has his own unique goth-inspired style, said: "Lhouraii is a very creative and kind person. She just loves creating things.

"I’m just sad for her because she loves going out and she’d never choose agoraphobia. It’s probably one of the worst things I could think for her to have.

"But I do see Lhouraii getting over Agoraphobia soon. I’ve seen small progress throughout the last few years.

"I think her desire to go outside will overcome her Agoraphobia sooner or later."

Lhouraii added: "I don't have friends. I don't really have anyone but I'm very lucky to have Nathan because I feel unconditionally loved.

"I know that he loves me no matter what. I looked nothing like this when we first met. He's happy to see me being myself and living for myself."

Lhouraii hasn’t ruled out cosmetic procedures to enhance her appearance, and says she's considering having her ears shaped to look more elfin.

She added: "I think my idea of beauty is people being themselves. If I see someone with blue skin I’ll think they look 10 times better just because I truly love blue skin.

"But people being their true selves, living for themselves, and just dressing how they want to dress – I find that so beautiful."

But Lhouraii's key aim is beating her agoraphobia and seeing society again.

She said: "I have a book of things that I want to do when I'm able to go outside.

"See a water fountain, see a statue, see and smell flowers, visit a therapist and visit a skin doctor. They’re the things I'm looking forward to the most."