Home » Lifestyle » Big changes in store for iPhone with iOS 16 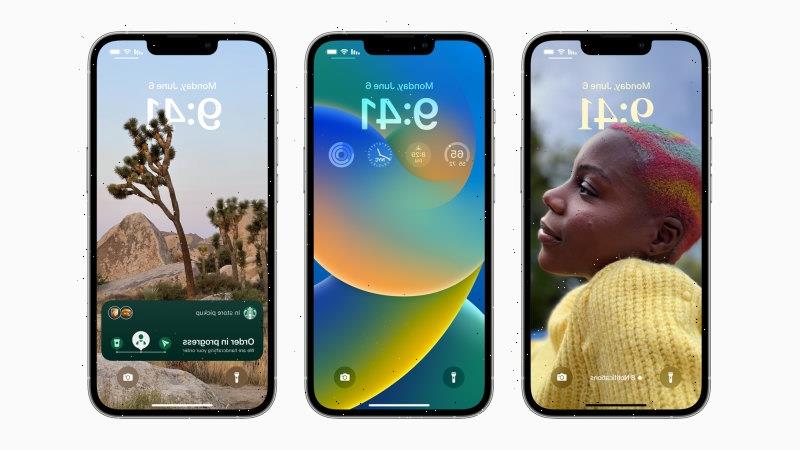 Big changes in store for iPhone with iOS 16

Apple has offered the first look at iOS 16, the new software coming to all iPhones (8 or later) in a few months’ time. And while features like designer lock screens and enhanced health apps lean in to Apple’s established strengths, iOS 16 also continues to borrow from the iPhone-maker’s competitors as well. Here’s what’s new.

Apple has struggled to find a good balance over the years when it comes to notifications. Nobody wants to be bothered by constant or irrelevant interruptions, but it’s also annoying if your phone fails to tell you about messages you missed or an email you’d been waiting on. 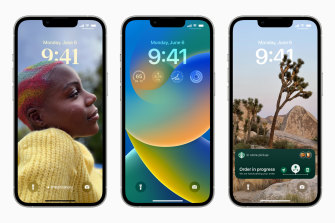 The iPhone’s new lock screen will be more visual and customisable.

But while some might argue that notifications need to made more prominent and sticky on the iPhone lock screen, so they don’t risk being missed or just piled up unseen in the Notification Centre, Apple clearly believes users want bolder and more intricately designed lock screens with more moving parts.

The new lock screen borrows a lot from the Apple Watch, letting you place widgets for anything including weather, battery levels, activity tracking or calendar events, and have that information constantly up-to-date. These are powered by Apple’s WidgetKit, meaning your favourite apps can make their own widgets for your lock screen too. 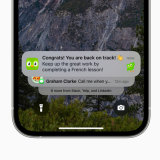 Notifications in their new default view.

Wallpapers themselves are now more interactive and customisable, like Apple’s Watch faces. You can choose pre-set themes created by Apple, set up groups of photos to shuffle through, and play around with colours, fonts and layouts. You can set up multiple lock screens and swipe through them as well, which could be handy if you want easy access to different information at work versus when you’re working out, for example.

So what does all this mean for notifications? By default, they’ll show up in a small Rolodex-like doodad at the very bottom of the lock screen, but you will be able to pinch them down to just a line of text that tells you how many you have, or expand them to their regular full-screen size.

Apple is also introducing Live Activities, which you can activate on notifications for supported apps. This will effectively turn a notification into a temporary widget, and examples given at WWDC include tracking a food delivery or watching a sports scoreboard.

Apple has built its Home app from the ground up for iOS 16, claiming it will make smart homes more efficient and reliable. The app’s new design emphasises quick and easy control, with a view of four different cameras up top and similar smart devices (like “lights” or “speakers”) grouped together in categories so you don’t have to go in and out of different room pages if you want to control them all. You can also send widgets for you favourite devices to the new lock screen. 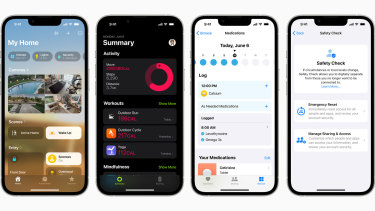 Apple also talked about the incoming Matter, which should arrive this year. It’s a new standard supported by Apple, Google, Amazon, Samsung and others, which should mean more smart home products work seamlessly regardless of your choice of phone or smart assistant. There are certain categories of smart device, including robot vacuums, that have never worked with Apple HomeKit, but with Matter support on its way for the Home app that will presumably change.

Health is an area where you’ll notice new features in iOS 16 as well. Apple is adding a medications tool that tracks which meds you’re on and reminds you when to take them, while also opening up the Fitness app for everyone, not just those with Apple Watches. Fitness will use the iPhone’s motion sensors to determine your steps and movements to plot them on its activity rings.

And finally, Apple is adding a new feature called Safety Check designed to protect people in violent relationships or at risk of domestic abuse. In recent years reports of features like Find my Phone, shared calendars and smart home controls being used as tools of abuse have increased, which is what this new feature aims to address. It helps people cut digital ties with their abuser by immediately revoking all sharing permissions from a specific person, or can reset all access completely in an emergency.

iMessage is an important product for Apple, because more than most it reinforces to users the importance of staying within the Apple ecosystem. Messaging competitors like WhatsApp work equally across different devices, but iMessage adds significant functionality only to conversations and group chats you have with other iPhone-owners. And with iOS 16, Apple is looking to expand this with new social and productivity features.

Likely to be most divisive is the new ability to recall or edit messages for up to 15 minutes after they’ve been sent, which is great for correcting typos but could make for some awkward convos. You can even mark received messages as unread, to make it clear to your recipient you won’t be replying any time soon.

A new SharePlay integration will also let you share synchronised activities like movies, music, games and more with your group chats while texting. And for work chats you can add documents or projects that you all want to collaborate on, with updates and sharing details included in Messages.

Traditionally Google’s services and apps, even on iPhone, have offered smarts and functionality that Apple couldn’t match. But as its machine learning and AI capabilities improve and iPhone becomes more powerful, Apple has been able to match or surpass a lot of the web giant’s greatest tricks, from photo editing to fast web browsing.

And that trend continues in iOS 16, with Apple bringing in a raft of features for its Mail app that users may recognise from Gmail. These include smarter search suggestions (even if you spell things wrong), and recommendations for subjects, recipients or attachments if the app thinks you may have left something off accidentally. There’s also an “undo send” capability that can stop an email hitting your recipient’s inbox if you realise your mistake after the fact, plus the ability to schedule an email send for later or be reminded about an email at a set later time.

Google Photos will become slightly less attractive for some iPhone users too, with Apple finally rolling out the ability to share a photo library through iCloud. Up to six people can contribute, setting up smart rules to determine which photos will be shared, and they can all edit and comment.

Unrelated to AI smarts, Apple is also introducing an option to have haptic feedback on its default keyboard. Vibrating keyboards have been ubiquitous on Android (and Google’s iPhone keyboard) for years, but for whatever reason Apple has avoided it, until now.