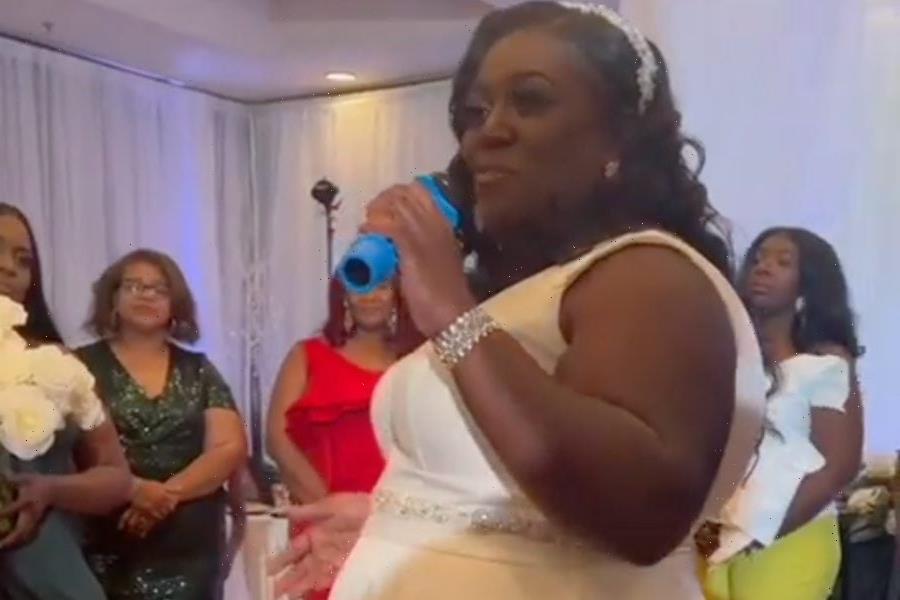 One of the main attractions at weddings, aside from the couple, is watching women transform into the greatest of athletes to catch the bouquet. It can be a fun activity and also gives women who want to get married hope that they’re up next.

Well, life coach Lakeisha Dixon Jones recently got married and decided to do things differently. Instead of tossing her bouquet after performing her nuptials, she prayed for the women in her life instead. That’s right. My girl stopped in the middle of her wedding reception and prayed for her friends. She also said she had too many single friends to give just one person the bouquet, so she broke it apart and gave a flower to each of them.

In an Instagram post about the moment she wrote, “Praying for my single friends was not an option; they were there for me. I had to give them a piece of my bouquet. I had to speak a decree. Finding love at 42 is a testament of God’s Glory.”

During her speech dedicated to her friends, Jones expressed that her journey to finding love has been difficult as she is 42.

“Most of you been on my couch, we’ve been on phone calls, we cried, prayed, fasted, we’ve done prayer calls. And I think it’s only right that my two bridesmaids walk behind me as I give you your flowers.”

She continued, “My hope and joy is that your wait will not be in vain and my joy is that God is going to bless you with a suitable man that’s right for you. Because as I have prayed and you have prayed for me, now it’s my turn. I don’t ever want to forget about the time I was crying and single.”

The coach also said people often get married and forget about their single friends, but she will not forget about hers. I personally remember being told I shouldn’t hang out with single friends anymore when I got married, but that’s a story for another day…

While many people gushed at her act of love, some hit the comments with “not everyone wants to get married” remarks. Although this is true, I’m pretty sure most people would like to be in a healthy and loving relationship. Also, nowhere in her speech did she say anyone had to get married—she simply prayed they find a suitable partner. At the end of the day, she took a tradition that’s usually fun and playful and turned it into a moment of hope and encouragement for women hoping to find love. She chose to pour back into friends who poured into her during her single season on her big day. What’s not to love about that?

In case you’re wondering about the history behind bouquet tosses, they’ve been going down at weddings since the 1800s, with origins in England. Before people were tossing expensive floral arrangements, simply touching the bride was thought to bring good luck. Guests would try ripping off parts of her dress and to escape, the bride would throw the bouquet and run.

This is a tradition that many still uphold all over the world, but Jones is reminding us that we can create our own traditions or put a spin on age-old ones. While finding love isn’t the single greatest accomplishment in life, experiencing true love is something every human being deserves. Whether it comes to fruition through a bouquet toss, the stars aligning, touching the hem of a newly married bride, or the fervent prayers of a sister-friend doesn’t matter.