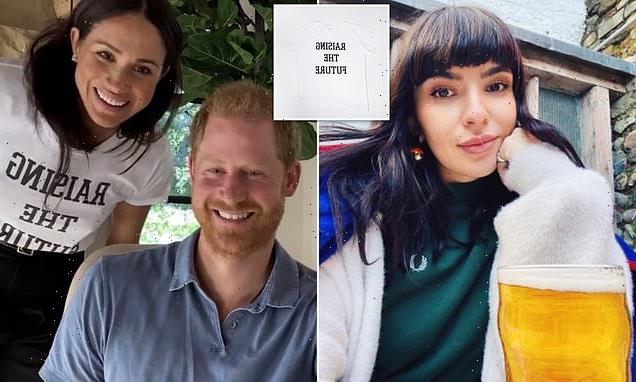 The British mother behind a black and white T-shirt worn by Meghan Markle in a trailer for Prince Harry and Oprah Winfrey’s new Apple TV series has revealed sales of the top have ‘snowballed’ since the clip was broadcast.

The Duchess of Sussex, 39, appeared behind her husband in their $14m Santa Barbara mansion dressed in the £27 top, from the Mere Soeur clothing brand, the brainchild of British businesswoman, Carrie-Anne Roberts, 31, which bears the slogan ‘raising the future’.

Now the mother-of-one, from Margate, says she has been inundated with orders for her £27 t-shirt, which she designs in the spare room of her house in Margate, Kent.

Carrie-Anne told Kent Online seeing Meghan in the t-shirt had been ‘overwhelming and emotional’, saying: ‘It is a big deal and when you have a small business you’re working so hard at it. As the day went on, it started to snowball and it was everywhere.’ 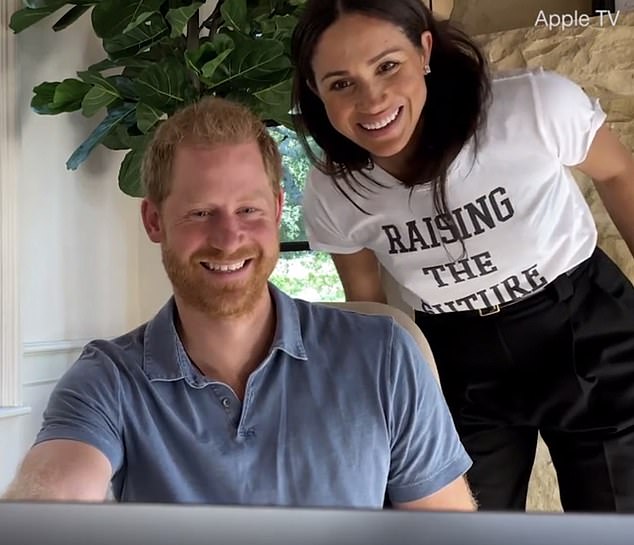 She set up clothing business, Mere Soeur, following the birth of her son, River six years ago.

The hipster brand specialises in ‘mama merch’ and is ‘dedicated to celebrating sisterhood and empowering mums.’

Carrie-Anne said: ‘It was really overwhelming and emotional because I started my business not long after I had my son when I was 24.

‘I didn’t have any friends who had kids and I didn’t know anything about running a business.’ 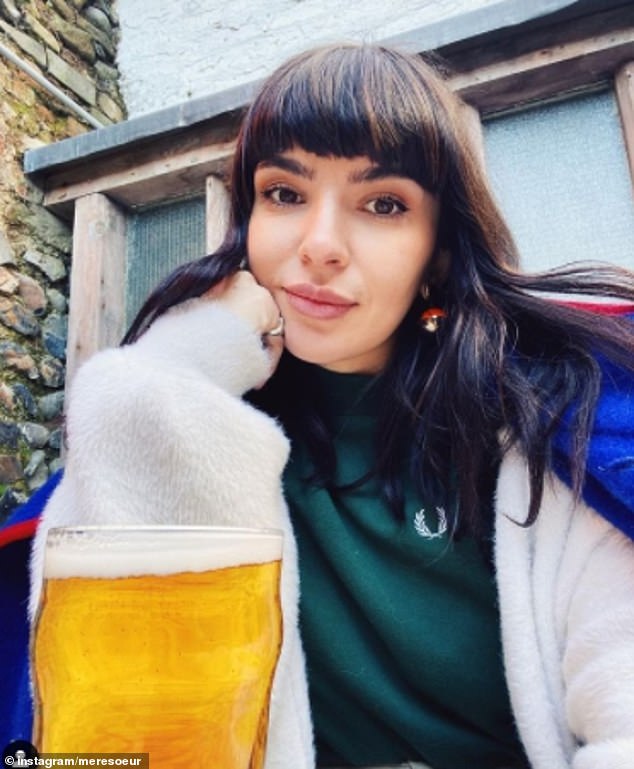 The mother-of-one says she has been inundated with orders for her £27 t-shirt, which she designs in the spare room of her house in Margate, Kent

‘I found when I became a mum, there were lots of things that were marketed towards them that might not necessarily be a bit of you.

‘A lot of it I didn’t identify with and there wasn’t anything out there I wanted to wear so I started to make things I liked.’

The designer, who is originally from north-Wales, added that she would be ‘very busy’ fulfilling orders for the black and white top for the next few weeks.

The T-shirt’s description on her website reads: ‘However you choose to do it, whatever your parenting choices, we’re all doing it. The greatest and hardest job you’ll ever have.’

Carrie-Anne had never worked in the fashion industry prior to launching the brand and started out by designing the tops on Vistaprint, an online printing service. 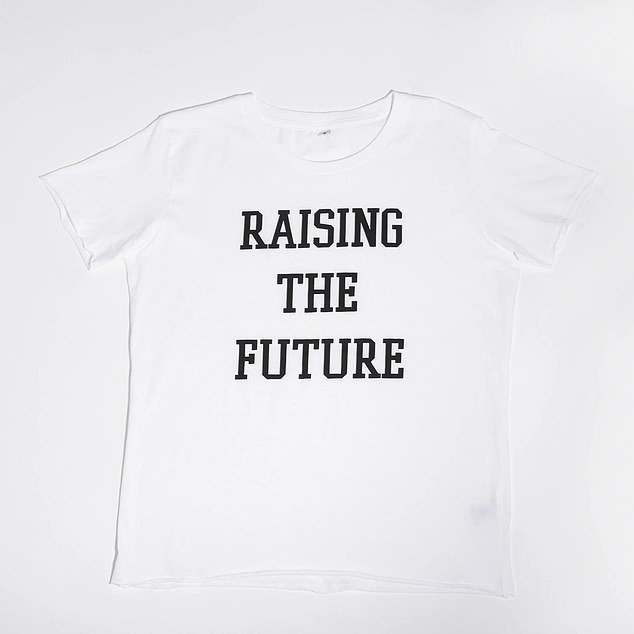 The T-shirt’s description on its website reads: ‘However you choose to do it, whatever your parenting choices, we’re all doing it. The greatest and hardest job you’ll ever have’

Before launching her brand, Mrs Roberts worked for cosmetics company Lush, and did 12-hour night shifts in a garlic bread factory.

She moved to the Kent seaside town of Margate last year.

The ‘raising the future’ design on the t-shirt donned by the Duchess was one of her first designs and has since become one of her most popular.

The T-shirt’s description on its website reads: ‘However you choose to do it, whatever your parenting choices, we’re all doing it. The greatest and hardest job you’ll ever have.’ 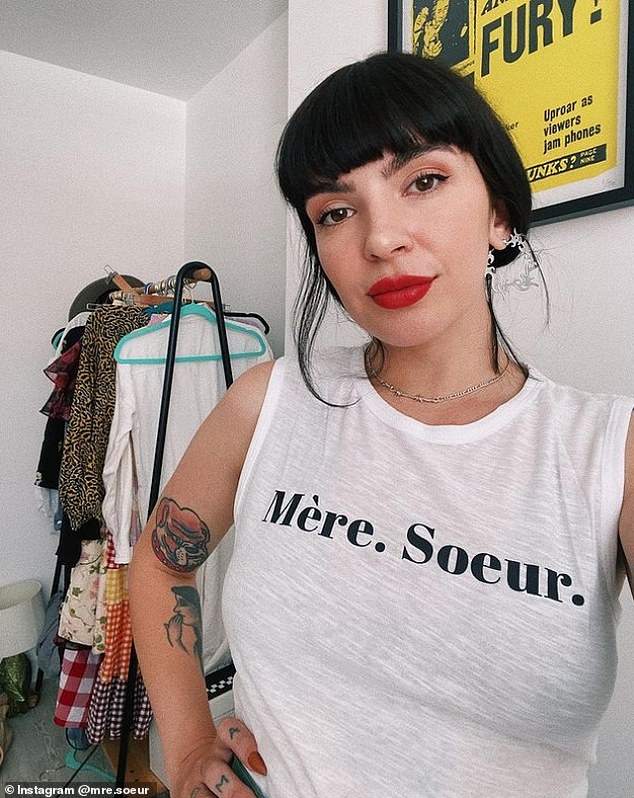 Explaining the message behind the slogan, Carrie-Anne said: ‘Raising the future means doing it however you want to do it, and if other people do it differently, that’s okay.’

The high-flying businesswoman has almost 50,000 followers on Instagram and is an ambassador for the Young Women’s Trust, an organisation which offers support to young women living in poverty.

Meghan teamed the white tee with black high-waisted trousers and a belt and kept her make-up natural – though she did accessorise with her emerald cut diamond earrings by Lorraine Schwartz, the jewellery designer that Harry collaborated with to create her eternity ring.

The Duchess wore the same earrings to Trooping the Colour in 2019 and to the Lion King premiere in July 2019 – for which she customised the studs by adding black onyx jackets. 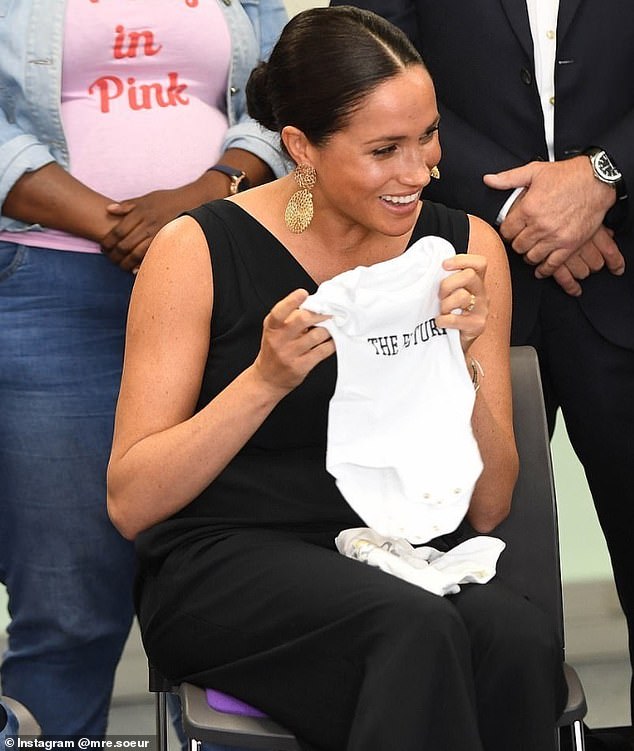 She looked like she’d been in a hurry to get dressed, as much of her long dark locks were tucked inside her T-shirt, as if she’d just popped it over her head.

Meghan was previously gifted a Mere Soeur baby grow with the slogan ‘the future’ while on tour in South Africa in September 2019, during a sit down with mothers and mentors working with the Mothers2Mothers charity in Cape Town.

The trailer’s release came  amid a backlash in the US after Harry’s attack on the ‘bonkers’ First Amendment that protects free speech and days after he launched another broadside at the Royal Family in which he appeared to suggest both his father and the Queen failed as parents.

The Duke of Sussex told Dax Shepard, host of the ‘Armchair Expert’ podcast: ‘He (Charles) treated me the way he was treated, so how can I change that for my own kids?’ Harry then described his life as a cross between the film The Truman Show – in which a man discovers he is living in a reality TV programme – and a zoo.

Other guests on the show include Lady Gaga and actress and producer Glenn Close.