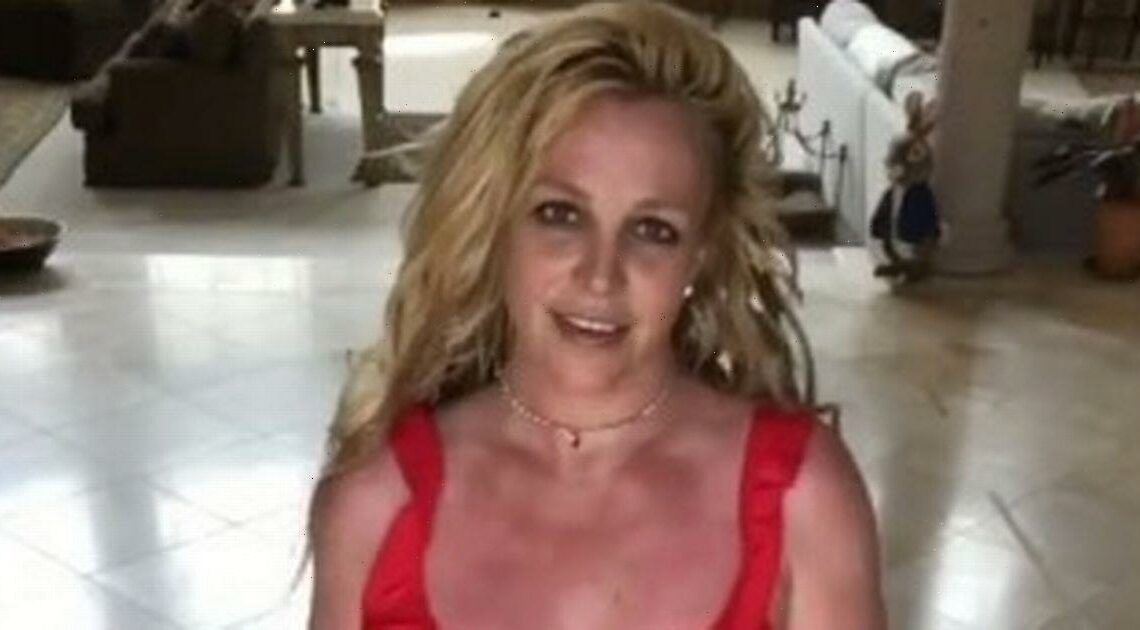 Britney Spears has again taken to her social media channels showcasing her sensational figure as she danced around her lavish Los Angeles home.

The pop singer frequently dazzles her fans with her sultry performances and her latest offering certainly didn't disappoint as performed her best pirouettes in what appeared to be her hallway.

Her latest upload comes just days after she was forced to deny claims she was either pregnant or had undergone breast enhancement surgery.

The 39 year old appeared to be in her element as she slipped into a rather daring crop-top and a pair of shorts, ensuring all eyes would be on her.

Mum-of-two Britney happily danced around her hallway in the video that she had filmed in April earlier this year.

In the video shared with her 33.6 million, the Toxic songstress performed a dance routine admitting that she was "spinning yet again" despite the clip being filmed several months prior to being uploaded.

She opted to wear a bold red crop top that flaunted her impressive physique alongside a pair of tiny black hot-pants that offered a glimpse at her gym-honed thighs.

Britney's signature blonde tresses were styled into loose natural waves, cascading over her shoulder before resting on her chest.

Captioning her post, she penned: "This was shot in April !!!! I’m spinning yet again… Why?? Because I can… and I will be for a very long time!!

"And I will be for a very long time !!!! I’m playing the lead in the new Tinker Bell movie … since Tim Burton is directing it, he’s coming over today to have tea… a lot of imaginative PLOTS."

She continued: " Can you imagine ??? Just kidding but it was a nice thought and sh*t… you never know right??? I’m excited either way!!!!

Britney added: "I mean do I dare post again today ???? DO I REALLY CARE what people think??!! Enjoy your beautiful Wednesday folks cause it’s a hot one."

The upload that has been viewed more than 1.7 million times was soon flooded with comments from her adoring followers.

"Post away Queen! Your real fans love it!!!!" gushed one.

While a second added: "Keep on living your best Tinker Bell Fantasy, we love to see you spin. We love that you care about people. You have a huge, beautiful [heart]."

"Do as you please love. Just keep your chin up, take each day as it comes. Don’t think too much about things, be yourself. If this is how you want to express yourself, then so be it," added a third.

‘Intergalactic’ Not Returning For Season 2 At Sky