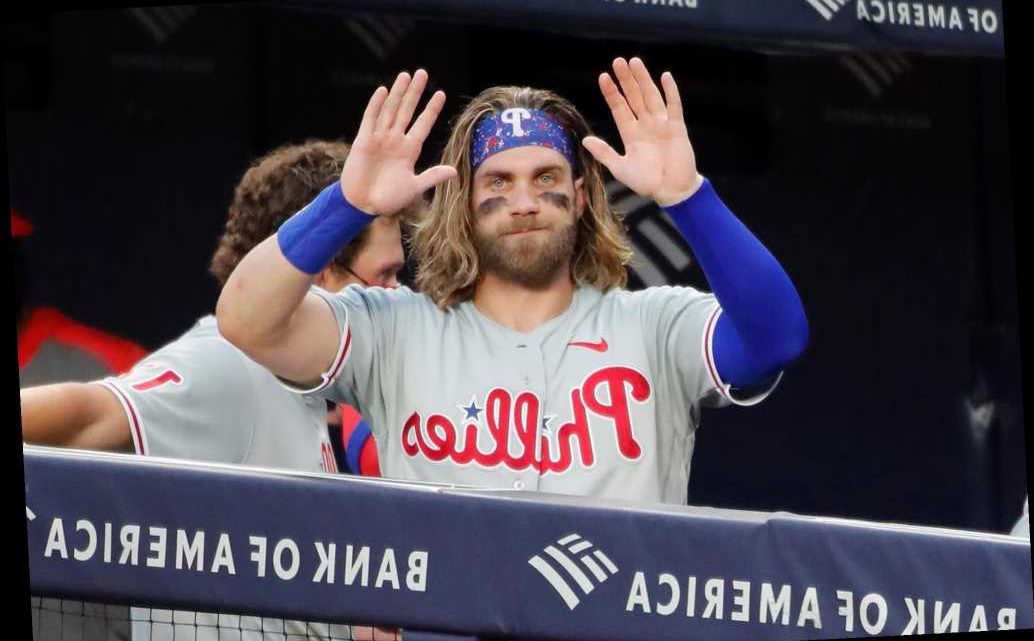 Bryce Harper stands up to heckler in cringey, viral video

MLB star puts on power show: ‘not a sugar-coated swing’

The Padres finally have their first no-hitter

Yankees about to get vivid reminder of ‘sour’ 2020 finish

Bryce Harper must not subscribe to the Hakuna Matata philosophy.

Instead of choosing to have no worries for the rest of his days, as the “Lion King” recommends, Harper let a fan irritate him Friday as he and the Phillies stood in the visitor’s dugout in Atlanta.

Except @LeGates23, whose real name is not known, butchered the pronunciation of Ronald Acuña Jr., the Braves star outfielder.

The video shows Harper turn around to correct the pronunciation, as lip-reading sleuths pointed out him responding, “It’s ah-CUHN-ya” as he makes a hand gesture to show where the tilde belongs.

Phillies catcher J.T. Realmuto was standing next to Harper and cracked a smile at the sort of strange interaction that was missing from stadiums everywhere when the COVID-19 pandemic restrictions were at their tightest.

@LeGates23 seems to be enjoying the attention and backlash. Here’s a sampling of his Tweets in the last 12 hours:

“Lol y’all mad at me for pronouncing a name wrong, but yet a professional player focused on a trolling fan instead of the game he was losing….. YALL FOLKS FUNNY & THANKS FOR BLOWING THE VIDEO UP!!!”

“Y’all notice how he “corrected” how I said his name…. not that he was better.”

“I was NEVER good in Spanish class…. teacher used to anyways tell me “mas or menos” after I answered my questions. Oh well, come se dice “I love @ronaldacunajr24.”

It’s usually not a good idea for athletes to let hecklers get under their skin, but let’s call this one a draw. Credit Harper for the creative comeback because fans should know how to pronounce the names of players on their favorite team, but Harper was 0-for-2 so maybe the fan distracted the slugger just enough to help the Braves to an 8-1 win.